Migrant Rights Defenders in the District

LAWG opened doors in Washington, D.C. along with Kids In Need of Defense (KIND) for Central American and Mexican migrant rights activists in September 2019 to explain how the conditions in Central America are forcing families, children, men, and women to flee their homes and to explain the impacts of the recent U.S. policy changes on migrants’ rights. 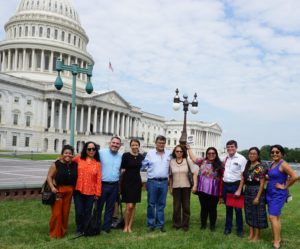 Lauri and Daniella with the Mexican and Central American delegation in front of the Capitol building. Photo by Antonio Saadipour.

We joined a congressional briefing and press conference with Alianzas Americas to highlight what terminating Temporary Protected Status (TPS) would mean for approximately 300,000 Hondurans and Salvadorans and then knocked on the doors of the halls of Congress, meeting with congressional offices and committees, the State Department, and advocates. Our partners spoke about their concerns with the “safe third country” agreements the Department of Homeland Security (DHS) signed with Guatemala, Honduras, and El Salvador.  They explained how U.S. pressure has led Mexico to increasingly commit migrant rights violations in the last few months, fueling a humanitarian crisis at Mexico’s southern border. 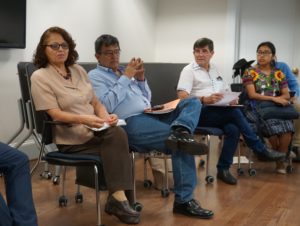 All of our partners expressed concern with the safe third country agreements, arguing that their own citizens are fleeing due to the violence and instability within their countries, so how could the U.S. government claim that these countries are safe? Suyapa Ucles from CASM went as far as to say, “ It is without a doubt forced migration. They talk about safe countries but it’s not safe for those living there or people passing through. They’ve cut funding for civil society groups but not for the military.” They noted that their countries lacked capacity to process asylum seekers. Finally, they said that the agreements were secretive and as civil society organizations concerned with migration, they found it hard to find detailed information about the agreements.

The migrant rights groups also spoke about how a major driver of migration is corruption and impunity, which leads to a continued cycle of violence. Some of the organizations noted that this will only be aggravated by the cuts in U.S. foreign aid to Central America. This slashes funds NGOs in the region that provide public health and community-based violence prevention programs, increasing the chance for youth to be exposed to violence. The delegation stressed the importance of the U.S. government reevaluating its approach to foreign policy in Latin America and the negative impacts of current U.S. foreign and migration policies. Ultimately, they stressed that people will continue to flee if they do not feel safe—so it is essential that their rights are respected within their own country and on their search to access protection.

Read the delegation’s full statement in English and Spanish.