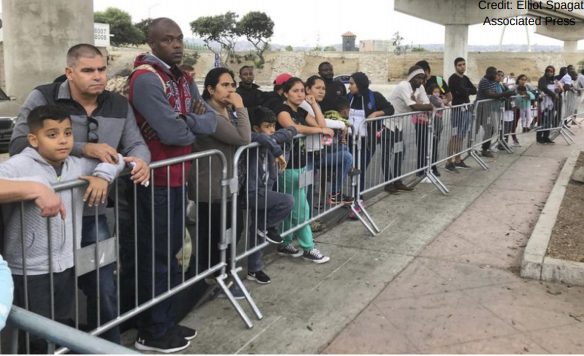 Border Patrol Increasingly Removing Mexican Asylum Seekers Without A Hearing
Kino Border Initiative, October 4, 2019
“Since mid-August, the Kino Border Initiative (KBI) has received at least 15 Mexican families who report that they fled violence in their communities yet when Border Patrol apprehended them, agents disregarded their requests for asylum and claims of fear.”

Trump Administration Has Placed 48,000 Asylum Seekers in Harm’s Way. The Courts Must Step In Now.
Karen Musalo & Brianna Krong, MS Magazine, October 3, 2019
“Whether or not the policy will be permitted to continue is now in the hands of three Ninth Circuit judges. We believe that the law and the facts are in our favor and hope for a decision halting MPP. Every day that this policy is allowed to stand, the administration is endangering thousands of lives.”

The Trump Administration Is Considering A Proposal That Could Make Asylum Tougher For Unaccompanied Children
Hamed Aleaziz, BuzzFeed News, October 2, 2019
“Under the draft proposal, if a child does not apply for asylum with USCIS within two months after appearing before a judge for an initial hearing, the judge will move forward with the case, as opposed to continuing it until a later time and waiting for USCIS to resolve the filing.”

D.C. shares information about immigrant arrests with ICE. One D.C. lawmaker wants to change that.
Marissa J. Lang, The Washington Post, October 4, 2019
“A D.C. Council member has drafted legislation that would put an immediate stop to nearly all cooperation between the District’s jails and federal immigration enforcement.”

U.S. claims reducing refugee numbers helps with the asylum backlog. Will it?
Gretchen Frazee, PBS NewsHour, October 2, 2019
“For the 2020 fiscal year, which started Tuesday, the U.S. plans to cap the number of refugees admitted into the U.S. at 18,000–the lowest admitted under the modern-day refugee system.”

The Trump Administration Plans To Collect DNA Samples From Some Undocumented Immigrants Who Are Being Detained
Hamed Aleaziz, BuzzFeed News, October 2, 2019
“The DNA results could then be placed into a nationwide database that contains millions of other profiles for hits on potential previous criminal activity, officials explained in the proposal. A senior DHS official told reporters Wednesday that the collection would help better identify immigrants in custody and help assist other agencies who come in contact with the individual.”

Shoot Migrants’ Legs, Build Alligator Moat: Behind Trump’s Ideas for Border
Michael D. Shear and Julie Hirschfeld Davis, New York Times, October 2, 2019
“Start turning away migrants at the border, he told them. My message to you is, keep them all out, the president said. Every single one of them. The country is full.”

Appeals court blasts DHS ‘return-to-Mexico’ border policy
Stephan Dinan, The Washington Times, October 1, 2019
“A federal appeals court expressed skepticism Tuesday over the Trump administration’s policymaking some asylum-seekers wait in Mexico, saying it’s troubling the government doesn’t even ask the migrants whether they might be in danger if they are forced back across the border.”

On 25th anniversary, Operation Gatekeeper blamed for border deaths, dehumanization of migrants
Kristina Davis, The San Diego Union-Tribune, October 1, 2019
“Her father was the one who searched relentlessly for their remains in the Arizona desert in 2009, finally discovering their bodies on a remote Arizona military base five months after they went missing.”

Key Trump asylum policies are tested in appeals court
Elliot Spagat, Associated Press, October 1, 2019
“The question before the judges – two appointed by President Bill Clinton and one by President Ronald Reagan – is whether the policies should be in effect while lawsuits proceed. They did not rule immediately.”

How the U.S. Asylum System is Keeping Migrants At Risk in Mexico
Jonathan Blitzer, The New Yorker, October 1, 2019
“From the standpoint of the Trump Administration, such high rates of attrition were a welcome by-product of a more overt aim: deterring future asylum seekers from making the trip north in the first place. Even before Trump took office, the Department of Homeland Security had developed a raft of policies known, collectively, as the Consequence Delivery System, which includes everything from prolonged detention to the use of criminal charges and the deliberate deportation of migrants to remote locations in their home countries.”

Judge grills government lawyer on potential violations of international refugee law
Camilo Montoya-Galvez, CBS News, October 1, 2019
“But you’re giving them nothing,” he told Stewart. “That is to say, you’re not even asking them the key question with respect to refoulement: that is to say, ‘Are you afraid?'”

Acting homeland security chief frustrated and isolated – even as he delivers what Trump wants at the border
Nick Miroff, The Washington Post, October 1, 2019
“But he acknowledged that he is losing the battle to keep DHS, which he views as a neutral law enforcement agency, from being used as a powerful tool for a partisan immigration agenda.”

Desperate Migrants on the Border: ‘I Should Just Swim Across’”
Caitlin Dickerson, The New York Times, September 29, 2019
“Many said that applying for asylum in other countries, as is required under the latest policy, felt like a pointless endeavor.”

Groups: Migrants told to wait in Mexico faced ‘bait, switch’
Elliot Spagat, Associated Press, September 26, 2019
“The cutoff date is July 16. That means Lopez and his family would have escaped the restrictions had they crossed illegally when they arrived in early July. Because they waited, they will likely be turned away.”

After SCOTUS Ruling, Asylum Seekers Ask Court for Protection
American Immigration Council, September 26, 2019
“Human rights advocates note that U.S. foreign policy is fueling the violence and instability that is causing people to flee. Those fleeing undertake dangerous journeys to the U.S., frequently facing violence from gangs and security forces along the way.”

Trump’s agreements in Central America could dismantle the asylum system as we know it
Nicole Narea, Vox, September 26, 2019
“In the lawsuit challenging Trump’s asylum rule, the Department of Homeland Security has invoked its authority under the Immigration and Nationality Act to impose “additional limitations and conditions, consistent with [the asylum statute], under which an alien shall be ineligible for asylum.” It claims that barring asylum seekers who don’t “request protection at the first opportunity” is a legitimate use of that authority.”

Life on the U.S. asylum waitlist: a long and dangerous wait
Alice Driver, National Geographic, September 25, 2019
“In April 2019, she arrived in Reynosa, across from McAllen, Texas. Vladimir Patrushev, his wife Mila, and their son Matthew came to Reynosa from Kyiv, Ukraine and, like the Tesfey family, traveled across continents hoping to request asylum”

Two Haitians, Including A Pregnant Woman, Die From Poor Treatment In Mexican Detention
Jonathan Greig, Hatian Times
“Vidal told The Haitian Times in an interview that in the case of the pregnant woman, Mexican authorities intentionally released her from custody when her conditioned worsened knowing she would die on her own.”

Drug Case Implicates Honduan Leader Praised by Trump for Asylum Pact
José de Córdoba, The Wall Street Journal, October 2, 2019
“A week after President Trump showered praise on Honduran President Juan Orlando Hernández when the U.S. and the Central American nation reached an immigration pact, the Honduran leader’s younger brother is set to go on trial Wednesday in New York on charges of smuggling tons of cocaine into the U.S.”

Honduran journalist who previously received death threats had gun put to her head outside home
Paola Nalvarte, Knight Center for Journalism in the Americas, September 30, 2019
“Journalist Sandra Maribel Sánchez, a journalist from Radio Progreso in Tegucigalpa, Honduras who has previously received death threats, said a man put a gun to her head as she arrived home in her car on Sept. 26.”

Open Secret: the mountains of Honduras where drug traffickers ruled
David C Adams & Jeff Ernst, Univision, September 30, 2019
“President Hernandez, who is an unindicted co-conspirator in the case, has also fervently denied the allegations against him, blaming them on traffickers seeking revenge for his anti-drug policies.”

Trump’s plan for those seeking safe haven: a ticket to the violent heart of Central America
Tom Phillips & Jo Tuckman, The Guardian, September 27, 2019
“But critics say returning often vulnerable migrants from countries in Central America, Africa and the Caribbean to unprepared and often extraordinarily violent cities such as San Pedro Sula is a recipe for disaster.”

US to resume Northern Triangle aid programs that support its interests, official says
Teresa Welsh, Devex, September 24, 2019
“While details about what’s in the agreement and what implementation will look like remain vague, it will “enhance collaboration on building protection capacity and increase protection options closer to home for vulnerable populations,” according to a joint statement by the governments of the U.S. and El Salvador.”

How an Ex-Mayor Could Bring Down the Honduras President
Steven Dudley, Insight Crime, August 27, 2019
“The former mayor who may bring down Honduras President Juan Orlando Hernández first appears on page eight of what can only be described as one of the most jaw-dropping condemnations of a political party ever produced by the US Justice Department.”

Orders from Above: Massive Human Rights Abuses Under Trump Administration Return to Mexico Policy
Human Rights First, October 1, 2019
“Restrictions by DHS and the immigration courts on access to counsel and the use of tent court hearings undermine asylum seekers’ right to legal representation and to understand and participate in their own removal proceedings.”

Migrant Rights Defenders Under Attack in Central America, Mexico and the United States
Frontline Defenders, September 2019
“The documentation shows a range of abuses against migrant rights defenders along the migrant routes and in the borderlands. Defamation and criminalisation of humanitarian activity is increasing throughout Central and North America.”