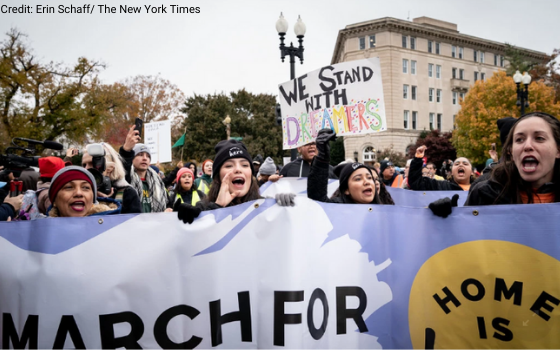 Supreme Court Appears Ready to Let Trump End DACA Program
Adam Liptak, New York Times, November 12, 2019
“The court’s liberal justices probed the administration’s justifications for ending the program, expressing skepticism about its rationales for doing so. But other justices indicated that they would not second-guess the administration’s reasoning and, in any event, considered its explanations sufficient.”

US held record number of migrant children in custody in 2019
Christopher Sherman, Martha Mendoza & Garance Burke, AP News, November 12, 2019
“After being forcibly separated at the border by government officials, sexually abused in U.S. foster care and deported, the once bright and beaming girl arrived back in Honduras withdrawn, anxious and angry, convinced her father abandoned her.”

Government doesn’t want Trump or his immigration policies mentioned in retrial of border aid worker Scott Warren
Ryan Devereaux, The Intercept, November 11, 2019
“The prosecutors concerns that Warren’s trial could become a referendum on Trump’s policies — specifically those that involve pressing charges against people for providing humanitarian aid — are not entirely misplaced.”

ICE may circumvent California’s ban on private immigrant detention centers
Andrea Castillo, Los Angeles Times, November 9, 2019
“Democratic state legislators and advocates for immigrants say that ICE’s action is a blatant attempt to circumvent the law in order to continue detaining immigrants in California. They’re now calling for answers from the agency, which has remained tight-lipped about the situation. ‘Let’s be clear: By rushing through new contracts before California’s ban takes effect, ICE is violating the spirit of California law and risks wasting taxpayer dollars in an attempt to lock away even more human beings,’ said Sen. Kamala Harris. ‘We need to fight back.’”

The Trump Administration Is Proposing To Become One Of Just Four Countries In The World To Charge A Fee For Asylum
Hamed Aleaziz, BuzzFeed, November 7, 2019
“The US has never before charged for asylum and, if enacted, the proposal issued Friday would make the country one of only four in the world to do so, joining Iran, Fiji, and Australia. It appears to be the latest move by the Trump administration to overhaul the asylum process and the immigration system itself, a focus of the president’s since taking office.”

CBP agents wrote fake court dates on paperwork to send migrants back to Mexico, records show
Gustavo Solis, The San Diego Union-Tribune, November 7, 2019
“Those documents, unofficially known as tear sheets, are given to every migrant in the Migrant Protection Protocols program who is sent back to Mexico. The document tells the migrants where and when to appear at the border so that they can be transported to immigration court. What is different about the tear sheets that migrants with closed cases receive, is that the future court date is not legitimate, according to multiple immigration lawyers whose clients have received these documents.”

Opposition Mounts to Trump’s Effort to Delay Work Permits for People Seeking Asylum
Emma Winger, Immigration Impact, November 7, 2019
“According to USCIS, the lost compensation to asylum applicants could range from approximately $255 to $744.76 million annually. Annual employment tax losses to the government could range from $39.15 to $118.54 million.”

Under Trump’s New Project, Border Patrol Agents Have Approved Fewer Than Half Of Asylum Screenings
Hamed Aleaziz, BuzzFeed, November 7, 2019
“’Border Patrol can’t get out of the law enforcement mentality. They think they are supposed to ‘break’ asylum-seekers,” said one DHS official, who noted that the pilot project was not the idea of border agents who are being forced to conduct the interviews. “They are not able to do legally sufficient work. It sucks for them because they never asked for this.'”

The Trump Administration Launched A Secretive Program To More Quickly Deport Mexican Asylum-Seekers
Hamed Aleaziz, BuzzFeed, November 6, 2019
“Under the program, Mexican asylum-seekers detained by Border Patrol agents are given an initial screening, called a credible fear interview, by US Citizenship and Immigration Services asylum officers within 48 hours. If a request for safe refuge is denied, immigrants can have an appeal heard over the phone by an immigration judge, according to government documents and those with knowledge of the policy.”

Cartel violence drives surge of Mexican asylum-seekers to border towns
Wendy Fry, The San Diego Union Tribune, November 11, 2019
““Imagine if I were to declare that the United States (security) strategy is bad because they allow, without control, the sale of weapons that are brought into Mexico and cause the death of civilians,” said López Obrador, in response, at his morning daily press conference.”

The People Will Not Forget
Maria McFarland Sánchez-Moreno, LA Review of Books, November 8, 2019
“CICIG will not return, and dark times probably lie ahead for Guatemala’s anti-corruption fighters. Yet CICIG’s legacy cannot be entirely erased. During its final week, CICIG released a report describing how the entire Guatemalan state was co-opted by illicit networks.”

USAID Honduras has no details on resumption of US funds, country director says
Teresa Welsh, Devex, October 24, 2019
“‘The way we are going to invest is going to change,’ Cossich said at the Central America Donors Forum. ‘It has not been defined how that is going to happen, when the funds are going to come..There’s a lot of uncertainty.”

DACA and the Supreme Court: How We Got to This Point, a Statistical Profile of Who Is Affected, and What the Future May Hold for DACA Beneficiaries
Daniela Alulema, Center for Migration Studies, November 2019
“DACA recipients are contributing members integrated in the fabric of US society as demonstrated by this statistical profile and the testimonies from a select group of beneficiaries. After several years of organizing, advocating, and coming out of the shadows, undocumented young immigrants were able to obtain temporary relief through the DACA program. In the seven years that the program has existed, they have strengthened their bonds to a nation that received them when they were children yet has not been willing to recognize legally what they are in fact – Americans.”

Metering Update
The University of Texas at Austin Strauss Center for International Security and Law and the Center for U.S.- Mexican Studies, UC San Diego School of Global Policy & Strategy, November 2019
“This update aims to highlight changes over the past three months across 14 Mexican border cities. It looks at changes in the asylum waitlist process, the number of asylum seekers waiting in each border city, and current CBP processing levels. The update draws on interviews with government officials, representatives from civil society organizations, and members of the public on both sides of the border.”

Painting the Full Picture: Displacement Data Gaps in the NTCA
Internal Displacement Monitoring Centre, November 2019
“This research reveals that targeted, generalised and structural violence, conflicts over land, natural hazards aggravated by large-scale development projects and climate change, and a lack of effective state responses all contribute to the phenomenon.”

What’s Happened to the People Returned to Mexico Under the Migrant Protection Protocols?
Katy Murdza, Immigration Impact, November 6, 2019
“The results are stark, documenting the violence, homelessness, and deprivation of rights faced by the approximately 50,000 asylum seekers who have been returned under MPP so far.”