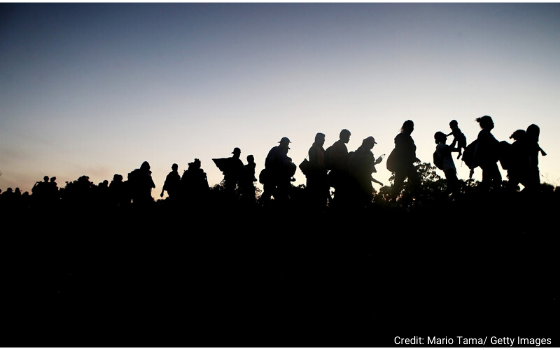 Join us to #SaveAsylum
Latin America Working Group
LAWG has partnered with numerous NGOs to raise our voices in a week of action to educate and mobilize the media, public, members of the U.S. Congress, and policymakers in Mexico and Central America to understand the negative impacts of MPP.

The Supreme Court May Criminalize Immigrant Advocacy
Lorelei Laird, Slate, November 18, 2019
“Writing for a three-judge majority, Judge A. Wallace Tashima said the provision could send a social media user to prison for encouraging undocumented people to stay until the law is changed, or a lawyer for telling her client that he has fewer due process rights outside the United States than inside.”

Trump is Sending Asylum-Seekers to Guatemala. His Administration Privately Admitted It Had No Idea What Would Happen to Them Next.
Hamed Aleaziz, Buzzfeed, November 18, 2019
“‘There is uncertainty as to who will provide orientation services for migrants as well as who will provide shelter, food, transportation, and other care,’ read the DHS brief…The implementation plan spelled out that Guatemala would provide the services but recently there had been ‘confusion’ as to whether that would happen.”

Trump admin readies rule to send asylum-seekers back to dangerous countries they passed through
Julia Ainsley, NBC News, November 18, 2019
“An official from U.S. Citizenship and Immigration Services, the part of the Department of Homeland Security responsible for providing benefits to those seeking asylum, said many inside the agency are quietly incredulous that the U.S will be removing asylum-seekers to countries like Guatemala.”

U.S. has world’s highest rate of children in detention: U.N. study
Stephanie Nebehay, Reuters, November 18, 2019
“He said the United States had ratified major international treaties such as those guaranteeing civil and political rights and banning torture, but was the only country not to hvae ratified the pact on the rights of children.”

The Trump administration’s immigration jails are packed, but deportations are lower than in Obama era
Abigail Hauslohner, The Washington Post, November 17, 2019
“ICE officials say that the detainee population has swelled — often cresting at 5,000 people more than ICE is budgeted to hold — as a direct result of the influxes of migrants along the southern border, and that when ICE is compelled to release people into the United States, it creates “an additional pull factor to draw more aliens to the U.S. and risk public safety,” said ICE spokesman Bryan Cox.”

Cubans in New Mexico say ICE put them in solitary for hunger strikes
Jens Gould, Santa Fe New Mexican, November 16, 2019
“Guards have also treated the Cubans poorly, including using insults and racist remarks, according to Peña Pavon and another Cuban detainee, Luis Miguel Valladares Oliva, who also said he was put in solitary confinement in both the Otero and Cibola facilities.”

Asylum officers rebel against Trump policies they say are immoral and illegal
Molly O’Toole, Los Angeles Times, November 15, 2019
“A spokesman for the union that represents some 13,000 Citizenship and Immigration Services employees said Stephens is believed to be the first asylum officer to formally refuse to conduct interviews under the program officially known as Migrant Protection Protocols. But across the country — according to asylum officers, including Stephens, as well as government officials — asylum officers are calling in sick, requesting transfers, retiring earlier than planned and quitting — all to resist Trump administration immigration policies.”

U.S. could send asylum seekers to remote jungle region under Guatemala plan
Nick Miroff and Kevin Sieff, The Washington Post, November 15, 2019
“The concerns would likely be amplified by a Guatemalan push to route asylum seekers to Petén. U.S. officials who described the Guatemalan government’s plan said the idea was met with dismay at U.S. Immigration and Customs Enforcement, which operates about 10 “repatriation” flights per week sending deportees to Guatemala City.”

USCIS Proposes Increased Fees for All Immigration-Related Applications
Aaron Richlin-Melnick, Immigration Impact, November 14, 2019
“The cost for becoming a citizen would rise above $1,000 for the first time in history. In another first, USCIS proposed a new fee for asylum seekers, which would make the United States only the fourth country in the world to charge for humanitarian protection. Advocates decried the fee increases as an attack on legal immigration.”

US Border Officials Pressured Asylum Officers To Deny Entry To Immigrants Seeking Protection, Report Finds
Hamed Aleaziz, BuzzFeed News, November 14, 2019
“According to the report, CBP officers have also placed Mexican nationals into the program, a group that is supposed to be explicitly excluded. CBP officers, the recommendations say, need to ‘address situations where families are placed in MPP and returned to Mexico despite having at least one immediate family member who is Mexican (e.g. the child was born in Mexico to a non-Mexican mother).’”

Tents, Stench, Smoke: Health risks are gripping migrant camp
Nomaan Merchant, Associated Press, November 14, 2019
“Safe drinking water is scarce. People regularly line up for a half-hour to fill milk jugs and buckets with water. Some people bathe and wash their clothes in the Rio Grande, known to be contaminated with E. coli and other bacteria. They rely on donors who bring meals, or they pull fish from the river and fry them over wood fires.”

New Facility for Unaccompanied Children at the Border to Be Built in El Paso
Sarah McConnell, The Texan, November 13, 2019
“Operated by the Office of Refugee Resettlement (ORR) within the U.S. Department of Health and Human Services (HHS), the 25-acre child migrant housing center will also include permanent structures with 512 beds and cottages that revolve around a recreational area complete with soccer fields and playgrounds for the children housed there. The new facility will be one of nearly 170 ORR shelters in 23 states across the nation aimed at caring for the approximately 5,000 unaccompanied children in HHS custody.”

For undocumented immigrants, our enforcement policies drive a public mental health crisis
Josue De Luna Navarro, USA Today, November 12, 2019
“Biologically speaking, the fight-or-flight response in your nervous system doesn’t distinguish a lion from an ICE agent — it will turn on regardless of who the perceived predator is. Living in constant fight-or-flight mode can lead to high blood pressure and contribute to anxiety, depression and addiction.”

White House to use webcams to create live feed of border wall construction
Nick Miroff, The Washington Post, November 12, 2019
“It is unclear how much the webcam initiative will cost, nor how the technology will be used. CBP has funds available for planning and mapping of the structure that could pay for the video feeds, according to one person involved in the discussions. The hunger for a real-time stream of wall construction underscores the Trump administration’s eagerness to show the president’s supporters and critics that the structure is being built, even as crews appear to be lagging behind the president’s construction timeline and smugglers already have been finding ways to get over and through the new barrier”

‘It feels like no one is listening’: Mexican asylum seekers battle cold as they wait turn
Lauren Villagran, El Paso Times, November 12, 2019
“CBP has prevented Mexicans, Central Americans, Cubans and others from crossing the international bridges to seek asylum in a practice immigrant advocates call ‘metering.’ Since early 2018, CBP officers stationed at the top of the bridges have turned back would-be asylum seekers, giving rise to unofficial lists that hold a migrant’s place in line.”

Supreme Court seems wary of allowing families of slain Mexican teens to sue U.S. border agents
Ann E. Marimow, The Washington Post, November 12, 2019
“‘We have a rogue officer acting in violation of the agency’s own instruction, using excessive force to kill a child at play,’ Justice Ruth Bader Ginsburg said. ‘How does that call into question any foreign policy or national security policy?’ Mesa’s lawyer, Randolph Ortega, said that allowing such a lawsuit to proceed would have a ‘chilling effect’ on the Border Patrol’s day-to-day operations and that Congress, not the courts, should decide who gets to sue federal officials. ‘The Border Patrol is the forefront of our national security,’ he said.”

A Trump administration strategy led to the child migrant backup crisis at the border
Neena Satija, Karoun Demirjian, Abigail Hauslohner and Josh Dawsey, The Washington Post, November 12, 2019
“According to current and former government officials, and emails and memos detailing the Trump administration’s strategy, it is clear they knew that without enough beds in government shelters, children would languish in Border Patrol stations not equipped to care for them, making the government a target of lawsuits and public criticism — both of which occurred.”

Government Doesn’t Want Trump or His Immigration Policies Mentioned in Retrial of Border and Worker Scott Warren
Ryan Devereaux, The Intercept, November 11, 2019
“With Warren’s retrial approaching, the prosecution and the defense have filed several motions in recent weeks, perhaps none so unusual as the one the government’s attorneys submitted on October 29. ‘For the first time, the United States learned the defense might mention the President of the United States, Donald Trump, his administration, or his administration’s policies,’ the motion read. Such references, the prosecutors argued, ‘would be irrelevant and unfairly prejudicial.’”

Guatemala congress cuts sentences for corruption convictions
Associated Press, November 12, 2019
“Guatemalan legislators have voted to reduce the possible jail terms for acts of corruption by as much as 50% for those who confess to their acts.”

“Mexico’s human rights chief draws fury for asking if journalists have been killed”
David Agren, The Guardian, November 14, 2019
“After being elected commissioner on Tuesday night, Rosario Piedra Ibarra blithely responded to reporters’ questions on the murder of reporters in the country by asking, “They’ve killed journalists?”She then insisted attacks on media members “happened in past administrations and it’s something terrible” – even though at least 11 journalists have been murdered in Mexico since President Andrés Manuel López Obrador took office almost a year ago.Mexican journalists responded with outrage to Piedra’s suggestion that attacks on the media had vanished with López Obrador’s arrival.”

Protect TPS Holders- Where They Live and Work: Actions at the State Level
Alianza Americas, November 2019
“These announcements have provided a much-needed respite for TPS holders, but do not address the longer-term challenge of moving them into a more stable and permanent status. That challenge is still up to Congress to address”

Indigenous People’s Rights to Exist, Self Determination, Language and Due Process in Migration
Indigenous Alliance Without Borders & International Maya League
“This report demonstrates the failure of the United States Government to recognize Indigenous peoples in forced migration and to respect their human rights within the immigration system.”

WOLA Report: Mexico’s Rule of Law Efforts 11 Years After Criminal Justice Reform: Challenges and Opportunities for the López Obrador Administration
Gina Hinojosa and Maureen Meyer, Washington Office on Latin America, November 13, 2019
“In this report, the Washington Office on Latin America (WOLA) examines Mexico’s progress in implementing the adversarial system, as well as the degree to which this transition has helped make Mexico’s justice institutions more transparent, efficient, fair, and rights-respecting. In addition, we take stock of the Mexican government’s approach to criminal justice reforms during the first year of President Andrés Manuel López Obrador’s presidency.”