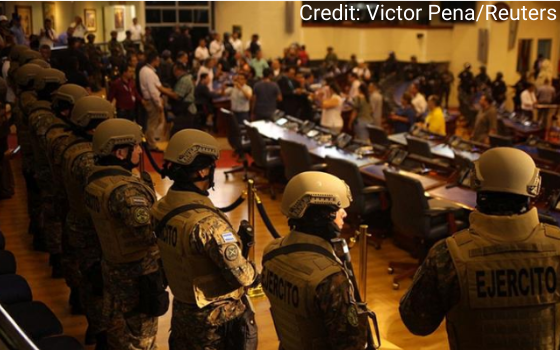 ICE Detainees Were Held Without Bond Hearings for Months. Attorneys Worry It Will Get Worse.
Adolfo Flores, Buzzfeed News, February 13, 2020
“Attorneys with clients held at an immigration detention center in New Mexico have found that at least 174 immigrants were  held for months without a bond hearing, in some cases despite repeated requests from lawyers.”

Trump administration puts pressure on completing deportation cases of migrant children
Priscilla Alvarez, CNN, February 12, 2020
“The message seems designed to apply pressure on immigration judges to wrap up such cases within a 60-day window that’s rarely met and falls in line with a broader effort by the administration to complete immigration cases at a faster speed.”

Trump is fulfilling his pledge to build fortress America — and running on it.
Nick Miroff, The Washington Post, February 11, 2020
“While his predecessors in the Republican Party often balanced calls for tighter border controls with a reaffirmation of the country’s immigrant identity, Trump has largely dispensed those phrases to depict newcomers as criminals, competitors and a welfare burden.”

The U.S. deported them, ignoring their please. Then they were killed.
Alison Parker, The Washington Post, February 10, 2020
“Those at risk are people like Santos Amaya, a Salvadoran police officer who had received death threats from gang members. He was deported from the United States in April 2018 and was shot dead, allegedly by gangs, that same month.”

A Group of Agents Rose Through the Ranks to Lead the Border Patrol. They’re Leaving It in Crisis.
Melissa del Bosque, ProPublica, February 10, 2020
“Some senior agents said they can’t help but blame the current state of the Border Patrol on the Douglas agents for fostering a culture that favored loyalty over competency…’It’s a group following each other on their coattails with the same ideas, because everyone thinks the same way. And a lot of people skipping rank based on who they know, not on their experience.’”

Two Gay Immigrants Left Everything for Safety in the US. Instead, They Were Sent to Guatemala.
Hamed Aleaziz, BuzzFeed News, February 10, 2020
“He said he tried to explain to the officer that he had not only already traveled through Guatemala on his way to the US but he had faced harassment there. He told the officer he didn’t want to go back.”

Trump to Propose $4.8 Trillion Budget With More Border Wall Funding
Jim Tankersley, Alan Rappeport, Zolan Kanno-Youngs & Margot Sanger-Katz, New York Times, February 9, 2020
“Congress, which is responsible for approving government spending, is under no requirement to adhere to White House requests. Lawmakers have previously rejected many of Mr. Trump’s attempts to gut domestic programs. But this year’s budget will serve as a blueprint for Mr. Trump’s priorities if he wins a second term. And some of the proposals can be achieved without the approval of Congress.”

As U.S. Congress Gave Liberian Path to Citizenship, Over 4,000 Now Applying for ‘Green Cards’
Cholo Brooks, GNN Liberia, February 8, 2020
“US Citizenship and Immigration Services announced Thursday that it started accepting green card applications for Liberians who have lived in the US since November 2014, as well as their spouses and unmarried children. After holding a green card for five years, eligible Liberians can apply for U.S. citizenship.”

Trump is Blowing Up a National Monument in Arizona to Make Way For the Border Wall
Ryan Deveraux, The Intercept, February 6, 2020
“The blasting is happening on the Organ Pipe Cactus National Monument, a tract of Sonoran Desert wilderness long celebrated as one of the nation’s great ecological treasures, that holds profound spiritual significance to multiple Native American groups.”

Long-term maintenance for Trump’s border wall could cost billions, but government isn’t saying
Nick Miroff, The Washington Post, February 5, 2020
“Repairs to the structure after vandalism and breaching attempts are another potential liability. The president and other senior officials have acknowledged in recent months that smugglers have sawed through the bollards in some locations, requiring welders and work crews to quickly patch the breaches. One former U.S. official with knowledge of the breaches said repairing the steel bollards costs between $5,000 and $10,000 per panel of fencing, depending on the location and terrain.”

Why You May Never Learn the Truth About ICE
Matthew Connelly, New York Times, February 4, 2020
“The National Archives made some changes to the plan, but last month it was announced that ICE could go ahead and start destroying records from Mr. Trump’s first year, including detainees’ complaints about civil rights violations and shoddy medical care.”

What Happens When Someone is Deported?
Lornet Turbull, Yes Magazine, February 4, 2020
“Crossing South is available online in both Spanish and English, and in a wallet-sized hard copy version people can easily carry with them. It explains what people can do if they have time to plan before they are removed, or what they can do if they are suddenly detained and then deported.”

Women and children make up majority of asylum-seekers sent to Guatemala under Trump deal
Camilo Montoya-Galvez, CBS News, February 4, 2020
“As of Tuesday, U.S. immigration officials have sent 378 asylum-seeking migrants from Honduras and El Salvador to Guatemala, denying them the opportunity to request refuge in the U.S. and forcing them to choose between returning home or seeking protection in Guatemala. Those deported under the deal include 144 children, 136 women and 98 men, according to the Guatemalan government.”

Conditions in Border Facilities Deny Asylum Seekers Meaningful Screening Interviews
Karolina Walters, Immigration Impact, February 4, 2020
“This evidence includes testimony from former detainees who described the impact of the conditions on their well-being during the detention. Being subject to PACR or HARP may cause asylum seekers to abandon the credible fear process. Sleep deprivation, inadequate food and water, and poor or nonexistent medical care have been shown to interfere with an individual’s reasoning.”

Trump Got His Wish. Mexico is Now the Wall.
Jorge Ramos, New York Times, February 7, 2020
“‘Their right to make a living, to not be abused, to be protected, helped, and supported should be safeguarded,’ Mr. López Obrador, then president-elect, said in October 2018 of the Central American migrants heading north. Unfortunately, he has since backtracked, pulling back on his promises to the migrants.”

Honduran National Police Chief Accused of Money Laundering
Associated Press, New York Times, February 11, 2020
“But according to investigators, there was no accounting for 13 bank accounts and 13.8 million million lempiras, or roughly $560,000, that Sauceda had in his name between 2006 and 2017. They say his wife also had 10 bank accounts with roughly 2.7 million lempiras, or $110,000, for which the origin couldn’t be traced. Authorities say they don’t know where the couple got the cash they used for some of the items that were seized.”

Concern in El Salvador After Militarized Standoff Over Funds
Associated Press, New York Times, February 10, 2020
“‘It is one of the most serious things we have seen in the last 27 years of post-conflict. … The lawmakers were practically being forced to pack the president,’ Aguilar said. Bukele defended his actions Monday in a string of Twitter posts, nothing that there was no violence at the congress even as four Salvadorans were murdered by gangs elsewhere the same day.”

Special Edition: Bukele Hijacks El Salvador’s Congress
El Faro, February 2020
“Those events were a stark reminder of a violent past we had hoped the country had left behind. We’re committed to continuing to bring you coverage and analysis as the standoff between the President and Congress continues to unfold. El Faro published this recap and editorial this morning.”

Heavily-armed police and soldiers enter El Salvador parliament
BBC News, February 10, 2020
“With no quorum in parliament, the president called on his supporters to descend on the parliament building, the BBC’s Central America correspondent Will Grant reports. About 50,000 pro-government demonstrators turned out. President Bukele told them to be back in the streets within a week if MPs did not debate the bill.”

Human Rights Groups Sound the Alarm as El Salvador President Deploys Military to Commandeer Legislature
CISPES, February 10, 2020
“The deployment of the Armed Forces for expressly political aims also appears to be gross violation of the 1992 Peace Accords that brought an end to El Salvador’s twelve-year civil war and drastically curbed the military’s role in society. Under the Peace Accords, the executive office has the power to deploy the military domestically only in the case of an exceptional public security crisis.”

Constitutional crisis in El Salvador over Bukele’s security plan
Anna-Cat Brigida, Al Jazeera, February 10, 2020
“‘I support him (the president),’ said Rosario, 36, who is currently unemployed, outside the legislative assembly Sunday after the president addressed the crowd. ‘We are just looking to improve the country in every way possible,’ she added, wishing only to give her first name. But human rights groups say the president’s actions are a ‘smokescreen’ that threatens the balance of separation of powers in the country.”

Drought and hunger: why thousands of Guatemalans are fleeing north
José García Escobar and Melisa Rabanales, The Guardian, February 7, 2020
“As a result, record numbers of subsistence farming families are going hungry: health officials registered more than 15,300 cases of acute malnutrition in children under five years last year – up nearly 24% from 2018. It’s the highest number of malnutrition cases since 2015, where a severe drought destroyed harvests across Central America.”

Latin America: The Need to Face the Dire Impact of Climate Change
Fernanda de Salles Cavedon-Capdeville & Erika Pires Ramos, AulaBlog, February 10, 2020
“Latin America – one of the most vulnerable regions to climate change worldwide – is already experiencing the dire consequences, including the displacement of millions of people, but the region has been slow to share the information needed for comprehensive strategies.”

Fear in Mexico as twin deaths expose threat to monarch butterflies and their defenders
David Agren and Oliver Milman, The Guardian, February 8, 2020
“The recent deaths of two butterfly conservationists in the region has, however, drawn attention to a troubling tangle of disputes, resentments and occasional bouts of harrowing violence that has lingered over the Monarch Butterfly Biosphere Reserve, a sprawling world heritage site situated 60 miles north-west of Mexico City.”

A Dispatch From the Caravan
Jeff Abbott, NACLA, February 6, 2020
“As long as the region suffers from unprecedented levels of structural and direct violence, the caravans and migration will continue in spite of whatever security measures the Trump administration and regional governments put into place.”

No Way Out: The Humanitarian Crisis for Migrants and Asylum Seekers Trapped Between the United States, Mexico and the Northern Triangle of Central America
Doctors Without Borders, February 2020
“With this report, MSF seeks to expose the devastating effects that the criminalization of migration is having on people fleeing violence and poverty in the NTCA…Over the course of seven years providing medical aid to people along the migration route, we have witnessed terrible suffering as well as extraordinary resilience among our patients.”