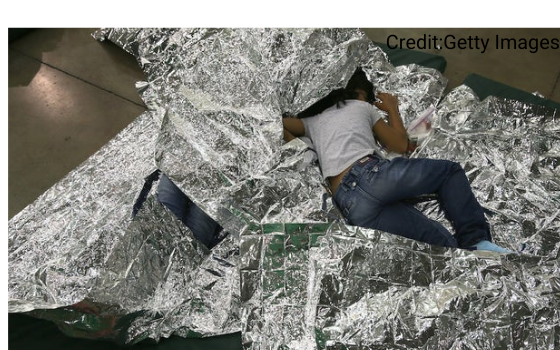 Kushner Seeks Investors to Help Curb Central America Migration
Justin Sink, Eric Martin, and Saleha Mohsin, Bloomberg, February 19, 2020
“The White House’s hope is that fresh investment and aid to the three countries would serve as both reward for their government’s cooperation with Trump’s push to stem the flow of migrants and incentive for citizens of the region to stay in their home countries. It’s also an attempt to reframe the provision of U.S. foreign aid, an expenditure Trump has dismissed as wasteful.”

Judge: Border Patrol’s Detention in AZ ‘Violate the Constitution’
Paul Ingram, Tucson Sentinel, February 19, 2020
“‘CBP has not changed the way it treats people in confinement, unless a court orders it,’ he said, adding that the case was ‘incredibly important’ because it will ‘improve drastically’ conditions at Border Patrol’s facilities.”

US border clampdown forces Venezuelan teen into Mexico alone
Nomaan Merchant, AP News, February 18, 2020
“A Venezuelan teenager has been forced back to Mexico by U.S. government authorities who denied her claims that she was fleeing political repression and violence, even after they accepted the same claims from her father.”

They were one of the first families separated at the border. Two and a half years later, they’re still apart.
Kevin Sieff, Washington Post, February 17, 2020
“She tries to avoid the word. What she says is that her mom is in Guatemala. Or that her mom has been deported and will try to come back soon. But when her teacher, or her social worker, or her best friend Ashley asks, Aleida sounds it out — one of the first words she learned in English. ‘They separated us’.”

Second round of migrant aid reimbursements hopes to broaden eligibility
Michael McDevitt, El Paso Times, February 16, 2020
“Local organizations that pitched to temporarily house, feed and care for migrants released into Las Cruces and other Borderland communities can soon apply for a second round of reimbursement from the federal government.”

Trust and Consequences
Hannah Dreier, Washington Post, February 15, 2020
“And in front of them all…was an old report from a shelter for immigrant children that was the reason the long-running matter of Kevin Euceda existed at all: ‘Youth reports history of physical abuse, neglect, and gang affiliation in country of origin. Unaccompanied child self-disclosed selling drugs. Unaccompanied child reports being part of witnessing torturing and killing, including dismemberment of body parts,’ the report said. The person who had signed it: A therapist at a government shelter for immigrant children who had assured Kevin that their sessions would be confidential.”

Border Patrol Will Deploy Elite Tactical Agents to Sanctuary Cities
Caitlin Dickerson and Zolan Kanno-Youngs, New York Times, February 14, 2020
“Among the agents being deployed to sanctuary cities are members of the elite tactical unit known as BORTAC, which acts essentially as the SWAT team of the Border Patrol. With additional gear such as stun grenades and enhanced Special Forces-type training, including sniper certification, the officers typically conduct high-risk operations targeting individuals who are known to be violent, many of them with extensive criminal records.”

Customs and Border Protection Officials are Allowed Full Anonymity Under FOIA—and That’s a Blow to Government Transparency
Emily Creighton, Immigration Impact, February 14, 2020
“Abuses perpetrated by CBP officials against adults and children have included the withholding of food and water as well as physical abuse. Vulnerable victims such as children face significant challenges in reporting abuses. Even when a complaint is made, a confusing and labyrinthine complaint system prevents transparency regarding investigations into allegations of abuse. The public has learned through reporting and FOIA requests that investigations generally are not conducted or are incomplete and, in many cases, no action is taken against individual officials.”

In the Midst of a Border Crisis, Cooking is About More Than Survival
Michelle García, Bon Appétit, February 13, 2020
“At the largest tent camp along the U.S.-Mexico border, cooking is a means of survival—not just for the body, but for the mind and soul. Cooking is caring for families, a means to earn money by selling meals to other migrants, an expression of human dignity to sustain spirits while living through a brutal humanitarian crisis that worsens by the day.”

Kushner Seeks to Revive Trump’s Overhaul for Immigration System
Franco Ordoñez, NPR, February 12, 2020
“The new plan would boost the number of legal immigrants by increasing visas for high-skilled works — something Trump has argued is needed for the tech industry and manufacturers to expand in America. It would recognize the Department of Homeland Security to streamline the leadership of its three immigration-related agencies, creating a new director position, or immigration czar who would be in charge of U.S. Citizenship and Immigration Services, U.S. Customs and Border Protection, and U.S. Immigration and Customs Enforcement.”

The Border’s After School Program
Slate, February 11, 2020
“Where teens on the border learn how to be CBP agents. In border towns across the country, high school students are participating in an after school program run by the U.S. Border Patrol. When journalist Morley Musick first encountered the Border Patrol Explorers, he saw it as another example of the contradictions of life on the border.”

This is how deportation fractures American families
Clarissa Donnelly-DeRoven, Chicago Reader, February 5, 2020
“Where are you taking them? They’ll be transferred between immigration detention centers, then deported to Mexico. Will they have a lawyer? Your parents will be allowed to fight their case, but they will not be provided with a public defender. Your parents will be given a list of low-cost attorneys but you must contact them on their own. Can I visit them? Yes during visiting hours.”

Killing of 7-year-old adds to anger in Mexico over femicides
Los Angeles Times, February 18, 2020
“Her body was found wrapped in a bag and abandoned in a rural area on Saturday and was identified by genetic testing. The cause of death has not yet been released. Five people have been questioned in the case, and there is video footage of her abduction.”

Salvadoran president sends more soldiers to fight crime after standoff with lawmakers
Nelson Renteria, Reuters, February 18, 2020
“‘Lawmakers are scandalized when they see a soldier, but they were not scandalized when gang members entered the Legislative Assembly to negotiate the lives of Salvadorans,’ Bukele said.”

As El Salvador’s president, I respect the separation of powers
Letters to the Editor, The Washington Post, February 16, 2020
“Our security plan enjoys more than 90 percent support from the people, crime is down, and forced migration is at a historic low. Separation of powers is not at risk in my country. The lives of hard-working Salvadoran families and our national security are.”

President Bukele, Brute Force Is Not the Way Forward for El Salvador
José Miguel Vivanco, New York Times, February 14, 2020
“It has been disappointing to see only mumbled remonstrance from foreign powers and international institutions that could curb Mr. Bukele’s authoritarian plunge. The delegation of the European Union to El Salvador, expressing ‘great concern’ rightly invoked the importance of the rule of law, respect for political pluralism and separation of powers in its response, but then posited a false equivalency, calling on both the president and the Legislative Assembly to respect institutional independence.”

‘It fills us with rage’: Mexican activists protest femicide at presidential palace
The Guardian, February 14, 2020
‘I’m not burying my head in the sand… The government I represent will always take care of ensuring the safety of women,’ he said, without detailing new plans. But early this week, he showed little patience for those who questioned him about the government’s commitment to fighting violence against women.”

Impunity Persists in Murder Cases of Mexico’s Indigenous Leaders
Parker Asmann, InSight Crime, February 14, 2020
“Despite increasingly coming under fire, authorities in Mexico are failing to hold those accountable for targeting Indigenous human rights leaders from armed groups and exploitation, underscoring the depth of impunity in such cases.”