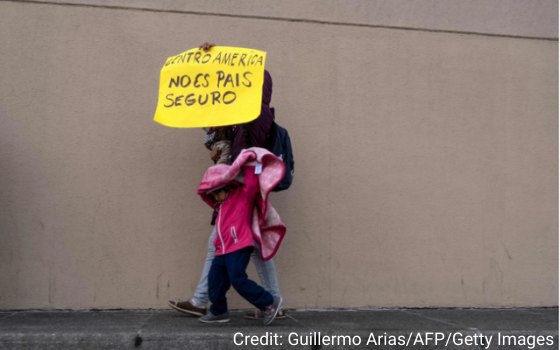 DHS expands programs that fast-track asylum process
Tanvi Misra and Camila DeChalus, Roll Call, February 26, 2020
“But the newly disclosed court documents show that if migrants express fear of return, Border Patrol agents have wide berth to place them directly into the PACR program, where they are rushed through the initial stages of the asylum process. It’s also where they would remain in CBP custody, with severe time restrictions for calling family or finding an attorney, instead of being placed with Immigration and Customs Enforcement.”

Supreme court blocks Mexican family’s legal bid over teen killed by border agent
Reuters in Washington, The Guardian, February 25, 2020
“The court, with the five conservative justices in the majority, refused to allow people who are not in the United States at the time of a cross-border incident to file civil rights lawsuits in federal court.”

The Supreme Court just held that a border guard who shot a child will face no consequences
Ian Millhiser, Vox, February 25, 2020
“Similarly, ‘the conduct of agents positioned at the border has a clear and strong connection to national security.’ These agents ‘detect, respond to, and interdict terrorists, drug smugglers and traffickers, human smugglers and traffickers, and other persons who may undermine the security of the United States.’ Allowing suits against these agents risks ‘undermining border security.’”

Justices find that parents of Mexican teen slain by Border Patrol agent cannot sue in U.S. courts
Robert Barnes, The Washington Post, February 25, 2020
“‘The gravity of this ruling could not be clearer given the Trump administration’s militarized rhetoric and policies targeting people at the border,’ Gelernt said in a statement. ‘Border agents should not have immunity to fatally shoot Mexican teenagers on the other side of the border fence. The Constitution does not stop at the border.’”

Ex-Guatemala Prosecutor Granted Asylum in U.S.
The Associated Press, New York Times, February 24, 2020
“Guatemala’s former chief prosecutor said Monday she has been granted asylum in the United States, in the face of charges filed in her home country that she claims are retaliation for her anti-corruption campaign.”

As Trump Barricades the Border, Legal Immigration Is Starting to Plunge
Zolan Kanno-Youngs, New York Times, February 24, 2020
“The expansion of Mr. Trump’s travel ban to six additional countries, including Africa’s most populous, Nigeria, began on Friday, and the wealth test, which effectively sets a wealth floor for would-be immigrants, started on Monday. Those will reshape immigration in the years to come, according to experts.”

Protecting the most vulnerable: What it takes to make a case under the US asylum system
Kate Morrissey, San Diego Union-Tribune, February 24, 2020
“At the port of entry in San Diego, she asked for asylum. She was handcuffed for the first time in her life. While in custody, she had an anxiety attack, a symptom of the lasting effects of what happened to her back home. She did not realize that she had been selected for Migrant Protection Protocols, a program known widely as ‘Remain in Mexico,’ until officials walked her back to Tijuana. She would have to wait across the border for her asylum case.”

‘Deportation With a Layover:’ US Sends Migrants to Guatemala
The Associated Press, New York Times, February 24, 2020
“About half of the people she spoke with had not known they were going to Guatemala when they were put on the plane in the U.S. Some thought they were being transferred to detention centers elsewhere in the United States. Only one of those she spoke with had decided to seek asylum in Guatemala, Schacher said.”

‘He Turned Purple’: U.S. Overlooks Ill Asylum Seekers
Zolan Kanno-Youngs, New York Times, February 22, 2020
“But before Remain in Mexico went into force, immigration officials were required to provide care for sick asylum seekers in their custody. That changed when the administration began returning migrants, many of them already ill, to areas with little access to treatment.”

How Steven Miller Manipulates Donald Trump to Further His Immigration Obsession
Jonathan Blitzer, The New Yorker, February 21, 2020
“‘The massive changes Miller engineered in border and immigration policy required that the policymaking process at D.H.S. be ignored,’ Alan Bersin, a former senior department official, told me. ‘Who do you think has filled the vacuum?’ Miller has cultivated lower-level officials in the department who answer directly to him, providing information, policy updates, and data, often behind the backs of their bosses.”

Trump’s ‘Remain in Mexico’ program dwindles as more immigrants are flown to Guatemala or are quickly deported
Arelis R. Hernández and Kevin Sieff, Washington Post, February 20, 2020
“Another administration program, the Asylum Cooperation Agreement, sends flights full of shackled Honduran and Salvadoran asylum seekers to Guatemala daily. So far, more than 600 people have been sent to the Central American country to seek asylum there under the agreement, but the vast majority end up abandoning their claims and going home to their countries of origin, according to Guatemalan immigration officials.”

Civil rights organizations file requests to preserve ICE records
Christina Carrega, ABC News, February 19, 2020
“According to the organizations, allowing ICE to discard complaints about civil rights violations and inadequate medical care after three years — unless pending litigation or a FOIA request — is against the law.”

‘What Part of Illegal Don’t You Understand?’
Sonia Nazario, New York Times, February 19, 2020
“Then, as now, many on both the right and the left have argued that the choice Americans face on immigration and asylum is between zero tolerance and opening the floodgates. But this is a false choice. We can have an immigration policy that is sane and humane.”

Mexico worried by US ruling over boy’s border killing
BBC News, February 26, 2020
“Mexico said it was worried the ruling would set a precedent for other incidents in which its nationals had been killed. The government expressed ‘deep concerns about the effects this decision will have on other similar cases, in which Mexican citizens have died from gunshots fired by US agents towards the Mexican side.’”

Feminist Collective Pushes Back Against Violence in Honduras
Vienna Herrera, El Faro, February 27, 2020
“Their work is directly linked to gender roles, given that they are conditioned to utilize their bodies in certain ways in order to ensure that the production and accumulation of narco activities continues to function. In more conservative terms: the narco uses women’s bodies to accumulate capital.”

Groping little girls is (not) a crime (in El Salvador)
Valeria Guzmán, El Faro, February 27, 2020
“Escalantte was then accused of sexually assaulting a minor, a crime that is punishable with eight to 12 years in jail. Nevertheless, the judicial court that handled the case, composed of two magistrates, concluded in November that the accused magistrate’s conduct was, at most, an offense that may be punished with a fine equal to the ten to thirty days worth of salary.”

Women in Mexico Are Urged to Disappear for a Day in Protest
Paulina Villegas and Kurt Semple, New York Times, February 26, 2020
“Instead of occupying public spaces, the traditional approach to protest, they decided to stage an action that symbolized women’s disappearance from them — ‘in order to send a message of anger and rejection of violence against women,’ she said.”

Costa Rican indigenous land activist killed by armed mob
Nina Lakhani, The Guardian, February 25, 2020
“Costa Rica, an eco-tourism hub with five million inhabitants, is widely considered the region’s most equitable and law abiding country. But in recent years, the Bribri and Brörán people have been subject to a string of violent attacks, racist harassment and trumped-up retaliatory lawsuits with almost total impunity.

Impunity Reigns In The Murder Of Indigenous Activist Samir Flores
Jose Benjamin Montaño, Latin America News Dispatch, February 21, 2020
“Samir’s death follows a disturbing trend of unsolved murders of environmental and human rights defenders, a majority of them Indigenous. A Global Witness report documents that in 2018, 14 land and environmental defenders were killed in Mexico. President Andrés Manuel López Obrador and his administration have vowed to address the problem. But one year after Samir’s murder, patience is running out.”

Americas Annual Report
Amnesty International, February 27, 2020
“Inequality, corruption, violence, environmental degradation, impunity and the weakening of institutions continued to be a common reality across the Americas, resulting in daily human rights violations for millions of people… Instead of establishing mechanisms to promote dialogue and address people´s concerns, the authorities resorted to violence in the policing of demonstrations and, in some instances, increased militarization of public order operations.”