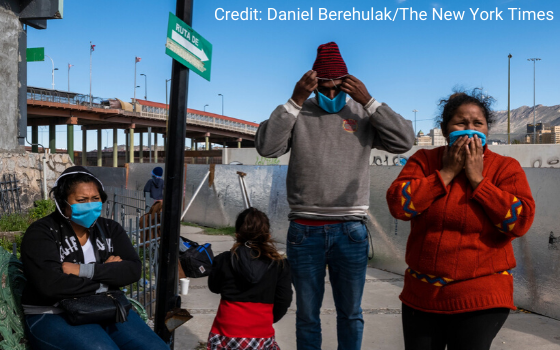 COVID-19: Stop the asylum ban & deportations!
Latin America Working Group, March 24, 2020
“Join us in calling on the administration to stop sending asylum seekers to danger, and instead screen and process them humanely. Deportations and the border shutdown will not make our communities healthier and safer. It is just another way to shut the door on people seeking safety. We should all be #SafeAndTogether, so let’s continue to advocate for those who are separated.”
Sign our petition here!

Central America Faces Coronavirus While Deportations Are in the Balance
Lisa Haugaard, Latin America Working Group, March 20, 2020
“As the COVID-19 pandemic affects the Americas, we need to keep a close watch on how governments serve and protect their people.  We also need to keep an eye on ways that governments take advantage of emergency measures for repression or corruption—or use it to further an anti-immigrant agenda.”

A Closed Border, Dashed Hopes and a Looming Disaster
Azam Ahmed, Miriam Jordan, and Kirk Semple, New York Times, March 21, 2020
“In practice, the United States will deport anyone caught crossing between official ports of entry, including those hoping to turn themselves in, denying them access to asylum and potentially sending them back into harm’s way… The Trump administration decision will also put an end, at least for now, to the hopes of asylum seekers who want to legally enter the United States at official border crossings. That includes thousands who have been waiting, some for months, for the chance to present themselves.”

Legal immigrants at risk of losing status during coronavirus pandemic
Rafael Bernal, The Hill, March 26, 2020
“A main concern for immigration attorneys are foreign nationals whose work permits are about to expire, whether they plan to request an extension or leave the country. USCIS, a largely paper-based organization, has suspended in-person service until at least April 1 to protect its staff, contractors and prospective applicants from contagion.”

Living with COVID — in an Immigration Jail
Naureen Shah and Andrea Flores, ACLU, March 25, 2020
“But people in government custody — including the 37,000 immigrants held in immigration jails and prisons throughout the country, and thousands more held near the border — don’t have these options.  They are being held in deadly conditions. That is why in addition to calling on public officials to downsize prisons and jails in the criminal legal system, the ACLU is calling on the government to utilize all available options to reduce the number of people in immigration detention.”

‘We live paycheck to paycheck’: Undocumented workers struggle as economy grinds to a halt
Jacqueline Garcia and Jackie Botts, Cal Matters, March 24, 2020
“More than 2 million undocumented workers, who do not quality for many state and federal benefits, are among the hardest hit Californians as the economy is battered by the coronavirus pandemic. Congress is working to provide an emergency relief fund that could benefit U.S. citizens and permanent legal residents. However, undocumented workers are not included.”

Deportations Are Making the Coronavirus Crisis Worse
Gaby del Valle and Jack Herrera, The Nation, March 23, 2020
“As cities across the world lock down and countries enact emergency travel bans, the United States has continued deporting immigrants at a steady rate. Though ICE released a statement explaining that it would cut back on some arrests and prioritize ‘public safety’ risks, the deportation machine is still up and running. Court hearings for non-detained immigrants have been put on emergency hold, but—despite an unprecedented outcry from immigration lawyers, judges, and even ICE personnel—removal proceedings for detained immigrants, like Héctor, continue daily.”

Rapes, murders … and coronavirus: the dangers US asylum seekers in Mexico must face
Alexandra Villarreal, The Guardian, March 23, 2020
“Like countless others across the world, the Guatemalan asylum seeker is wary of contracting the coronavirus. But he’s also worried about going outside after Mexican municipal police detained him illegally, then tortured and robbed him earlier this month, according to him and his attorney.”

U.S. postpones court hearings for asylum-seekers in Mexico over coronavirus
Camilo Montoya-Galvez, CBS News, March 23, 2020
“The Justice Department said hearings for migrants in the so-called “Remain in Mexico” program that were initially slated to take place before April 22 would be postponed. A spokesperson for the Executive Office for Immigration Review (EOIR), the Justice Department branch that oversees the nation’s immigration courts, said the decision will ensure asylum-seekers in the program can have their ‘day in court,’ while safeguarding the health of migrants, officials and U.S. citizens.”

Some Central Americans Awaiting U.S. Asylum to Be Allowed Legal Entry to Mexico
Reuters, New York Times, March 22, 2020
“‘We’re evaluating the regular admission of some nationals from El Salvador, Honduras and Guatemala who are presented to the Mexican immigration authorities, in order to minimize crowding at U.S. Border Patrol stations,’ the ministry said in a statement. Fewer than 100 people per day will be allowed into Mexico, it added.”

There is No Good News
Michael Seifert, Views from Alongside a Border, March 22, 2020
“Last week, however, Mexican immigration agents began intercepting the children who were crossing the bridge. The agents would take the children back into Matamoros, where they were turned over to the Mexican equivalent of Child Protective Services. This was a horrifying eventuality for the parents of the children, for the reclamation of their children required reams of documentation, much of which had not survived their journey across Central America and Mexico.”

A 42-Year-Old Mexican Man Has Died In ICE Custody
Hamed Aleaziz, BuzzFeed News, March 22, 2020
“The death is the 10th since October, when the 2020 fiscal year began. The agency had eight deaths in custody in the entire 2019 fiscal year.”

I Used to Run ICE. We Need to Release the Nonviolent Detainees.
John Sandweg, The Atlantic, March 22, 2020
“The large-scale release of detainees doesn’t mean that undocumented immigrants should get a free pass either. Those who are released can and should continue to go through the deportation process. ICE can employ electronic monitoring and other tools to ensure their appearance at mandated hearings and remove them from the country when appropriate.”

DHS: Pandemic Measures Cut Illegal Border Crossings by Half
Colleen Long and Maria Verza, Associated Press, March 22, 2020
“Meanwhile, there was growing concern on the Mexican side of the border that the number of migrants stranded there would only increase, with shelters already at capacity. ‘We have 300 people in the shelter and we can no longer take it. We have been a week without the United States asking for people and if they don’t ask, we are going to be overcrowded,’ said Héctor Joaquín Silva, director of the Senda de Reynosa shelter, which borders McAllen, Texas.”

ICE said it won’t deport people for seeking medical care. Immigrants won’t believe them.
Jaclyn Kelley-Widmer, Washington Post, March 21, 2020
“Nevertheless, undocumented immigrants fear stepping into a hospital, worrying that their status will be identified and tracked — if not now, then later. They are not likely to believe such reassurances, given the past several years of ever-increasing monitoring and enforcement even of sympathetic noncriminal immigrants.”

13 changes to the US immigration system during the coronavirus pandemic
Priscilla Álvarez, CNN, March 20, 2020
“Against the backdrop of the outbreak, the Trump administration is also trying to move forward with some of its most restrictionist policies that have struggled to be put into practice, including blocking entry to asylum seekers.”

U.S.-Mexico border humanitarians scramble to curb coronavirus
J.D. Long-García, America Magazine, March 20, 2020
“‘We’re really trying to do all we can to mitigate the risk as much as possible,’ Father Carroll said. ‘We count on a lot of volunteers, so we’ll have to do what we can and plan accordingly. But we’re going to continue to serve the migrants here.’”

Sprawling Mexican Border Camp Ill-Prepared for Coronavirus
Reuters, New York Times, March 22, 2020
“In the event of a suspected case, migrants will be instructed to stay in their tents as tests are sent to Mexico City for processing. Those who require hospitalization will be transferred about an hour away to the city of Reynosa, which has a similar supply of ventilators, Gonzalez De la Garza said. Migrants who test positive but do not need to be hospitalized will be instructed to remain in isolation. Health officials are exploring the possibility of designating a special shelter for them, he said.”

Push to curtail activism continues in Guatemala
Jeff Abbott, Toward Freedom, March 24, 2020
“While the Constitutional Court’s decision temporarily suspends the reform from being implemented, it now must go to a public hearing where supporters will present their arguments. A full decision will take time. In spite of the court’s decision, Guatemala’s conservative new President Alejandro Giammattei stated that the reform would become law, and that the court had made their decision too quickly.”

Honduras’s Deadly Water Wars
Jared Olson, The Nation, March 24, 2020
“Here, in the heart of Carlos Escaleras National Park, at the head of dozens of rivers, a deadly water conflict is playing out between the local oligarchy, intent on extracting as much value from this area as possible, and the residents of the valley’s small villages, who depend on the rivers for much of their sustenance and livelihood.”

Americas at a Crossroads in Response to Coronavirus
Amnesty International, March 24, 2020
“People all over the Americas are concerned and expect governments to react decisively. We in Amnesty International also believe that authorities across the region must show leadership and they must do so by prioritizing human rights and by refraining from abusing their power in the middle of this emergency.”

Responding to the COVID-19 Crisis While Protecting Asylum Seekers
Amnesty International USA, Doctors Without Borders/Médecins Sans Frontières USA, Human Rights First, Physicians for Human Rights, Refugees International, and Women’s Refugee Commission, March 25, 2020
“Decisions relating to the COVID-19 pandemic should be driven by science and public health expertise. We urge Congress and the administration to urgently take the steps we have outlined above. Our organizations are prepared to discuss these recommendations in greater depth to find solutions that respect the right to seek asylum.”

P.S. Do you know of someone who might be interested in receiving the Migrant News Brief? Tell them to email lalvarez@lawg.org