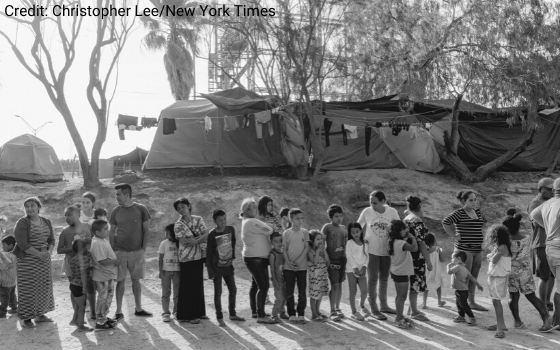 Stephen Miller’s hardline policies on refugee families make a comeback at HHS
Dan Diamond, Politico, April 16, 2020
“The office — which takes custody of thousands of migrant children — is now seeking to delay placing migrant children in shelters operated by the health department, which would instead leave those children in the custody of the border patrol for an extended length of time, according to an internal email sent last week and reviewed by POLITICO.”

Supplies for coronavirus field hospital held up at U.S.-Mexico border
Julia Love and Mica Rosenberg, Reuters, April 15, 2020
“Red tape and rules on exporting medical gear have delayed work on a field hospital for migrants in an asylum camp near Mexico’s border with Texas, undercutting efforts to prepare for the coronavirus pandemic, according to organizers of the project.”

75% of migrants deported to Guatemala on single flight tested positive for coronavirus: Health minister
Conor Finnegan, ABC News, April 15, 2020
“He also suggested that between 50% and 75% of all migrants deported from the U.S. recently have tested positive, without specifying what time frame he was talking about or providing a total number, but he later walked that back, saying he was referring to one flight. The country’s Ministry of Public Health and Social Assistance has reported 180 cases in total, with five deaths. If Monroy is correct, it could mean dozens of Guatemala’s cases are tied to U.S. deportations.”

Guatemala walks back claim that majority of deportees from U.S. are infected with covid-19
Kevin Sieff, Washington Post, April 15, 2020
“On Tuesday evening, Monroy said that 50 to 75 percent of all deportees who have been sent to Guatemala during the pandemic had tested positive for covid-19, the disease caused by the coronavirus. In an updated statement Wednesday, he did not explain how his initial error was made.”

US plans new aid to Central America, year after Trump cutoff
AFP, France24, April 14, 2020
“‘To support further progress, additional targeted Department of State and United States Agency for International Development funding will be made available,’ Pompeo said in a statement. ‘This funding will support programs to continue our joint efforts to deter illegal immigration to the United States.’ Pompeo said that money would also back security programs and assist economic development led by the private sector.

US-Mexico border: The ‘sidewalk school’ teaching migrant children
Dylan Baddour, Al Jazeera, April 13, 2020
“Once a housewife in Brownsville, Rangel-Samponaro had long volunteered to help the many migrants who passed through her city. But after new US migration rules last year known as ‘Remain in Mexico’ began blocking asylum seekers from entering her country, Rangel-Samponaro, saddened by what she saw, got fully involved. She founded a school. She moved to Mexico.”

The Impending Mass Grave Across the Border From Texas
Karla Cornejo Villavicencio, New York Times, April 12, 2020
“Under normal circumstances, if you can call any of this normal, doctors and nurses can’t do much aside from tending to a wound that requires stitches, and diagnosing strep throat or the flu. They aren’t able to get tests to diagnose Covid-19.”

This crisis requires political courage to respect our values. Trump isn’t doing that.
Editorial Board, Washington Post, April 12, 2020
“Mr. Trump had severely tightened asylum procedures before the pandemic but had not, and could not, expunge the possibility that migrants with reasonable asylum claims could apply and be heard in court. Respecting those asylum procedures, like respecting civil liberties, presents few challenges during prosperity and peacetime. It is more difficult, and requires political courage, when the country is reeling economically, and on what amounts to a war footing, as it is today.”

Trump Threatens to Deny Visas to Countries Refusing Deportees
Michelle Hackman, Wall Street Journal, April 10, 2020
“The memo, issued by President Trump on Friday night, gives the administration authority to suspend visa access to any country that ‘denies or unreasonably delays’ accepting citizens that the U.S. is seeking to deport, on grounds that the deported immigrants might be infected with  the new coronavirus.”

Migrant Children Still Face Speedy Deportation Hearings in COVID-19 Hotspots
Julia Preston, The Marshall Project, April 10, 2020
“They are children who were caught crossing the southwest border without papers and sent to migrant shelters in New York when the coronavirus was silently spreading… In two courthouses in the center of the besieged city, hearings for unaccompanied children—migrants who were apprehended without a parent—are speeding forward. The U.S. Department of Justice, which controls the immigration courts, has said it has no plan to suspend them.”

U.S. judge orders ICE to say how many detained migrants are being released under expanded coronavirus medical reviews
Spencer S. Hsu, Washington Post, April 9, 2020
“U.S. immigration officials must disclose the number of releases they have granted or denied from detention centers in five southern states to migrants considered at higher risk of dying from coronavirus. The order from U.S. District Judge James E. Boasberg came during a hearing Thursday — days after U.S. Immigration and Customs Enforcement expanded the categories of detainees who should be considered for release beyond pregnant women and those over age 70.”

Thousands of Migrants in Matamoros Set to be Moved to a New Encampment, Advocates Say
Acacia Coronado, Texas Observer, April 10, 2020
“Rudnik believes the move has little to do with the virus: Now 2,000 people will be in close quarters. Rather, she thinks it’s about having greater control over the migrants in the camp. She said Mexican officials have not provided a plan for how the migrants will be fed and what liberties they will have to move about and travel.”

How Migrant Shelters in Mexico Are Facing COVID-19
Mia Armstrong, Slate, April 13, 2020
“Given all this, migrant shelters face a difficult dilemma: Do they stay open and continue providing services to the people who need them now more than ever? Or do they close their doors in an effort to protect the people they already have inside? I spoke with officials from three migrant shelters—one each in north, central, and southern Mexico—about how they’ve responded to the pandemic and their concerns for the future.”

Bad News for Democracy in Central America
José Luiz Sanz, El Faro, April 15, 2020
“None of the four heads of state in northern Central America are currently facing unified, viable opposition parties. The tendency toward centralized pandemic responses could end up further normalizing the image of the political strongman and the wielding of patriotism as a cudgel against dissent and criticism. To ask the press to put off damage assessments as the panorama unfolds is to suggest that entire countries stick their heads in the sand for months to wait out the crisis.”

Coronavirus Affects Extortion Payments in Mexico and Central America
Maria Alejandra Navarette, InSight Crime, April 13, 2020
“According to the Global Initiative Against Transnational Organized Crime (GI), despite certain criminal organizations showing greater flexibility in collecting extortion payments, they will want to ensure money continues to flow as quickly as possible. Therefore, GI suggested there is a high likelihood that these groups will start to collect extortion fees retroactively once quarantine measures start to be lifted.”

Covid-19 in El Salvador: safeguarding public health or restricting human rights?
Amaral Arévalo and Clare Wenham, LSE, April 13, 2020
“In this way, initial health measures have morphed into a regime of restrictive measures far harsher than those introduced elsewhere in the Americas. To implement such measures, the government has deployed an ambiguous communication strategy, allowing the revival of military action under the pretext of combating the virus. Anyone carrying the disease has become a new ‘enemy within.’”

Will President Bukele Lift El Salvador Out of Its Economic Slump?
Peter Schechter, Brink News, April 13, 2020
“But President Bukele is also trying to lift the country up by its economic bootstraps and give Salvadorans a reason to stay. If President Bukele succeeds — while respecting the nation’s democratic institutions (and this last item is not so obvious) — he could provide a new blueprint for migration policy around the world.”

The Latest Brick In The Wall: How The Trump Administration Unlawfully ‘Expels’ Asylum Seekers & Unaccompanied Children In The Name Of Public Health
Azadeh Efrani, National Immigrant Justice Center, April 15, 2020
“On March 20, 2020, the Trump administration took the unprecedented step of sealing the U.S. border under the guise of curbing the COVID-19 pandemic. This sweeping executive action has raised many questions related to the intersection between public health and immigration law, particularly as countless asylum seekers and children have been “expelled” at the U.S. border.”

A Demographic Profile of TPS Holders Providing Essential Services During the Coronavirus Crisis
Nicole Prchal Svajlenka and Tom Jawetz, Center for American Progress, April 14, 2020
“While Americans continue to grapple with the coronavirus crisis, an estimated 131,300 Temporary Protected Status (TPS) holders from El Salvador, Honduras, and Haiti are helping to support the nation by serving as essential workers. These individuals, who, due to their jobs, do not have the option to shelter in place or work from home, are exposing themselves to the risk of infection by continuing to report for duty as home health aides, repair workers, food processors, and more.”

Immigrant Workers in Low-Wage Frontline Jobs Need COVID-19 Workplace Protections Now
Holly Straut-Eppsteiner, National Immigration Law Center, April 10, 2020
“The federal response to COVID-19 should include reforms that recognize immigrants’ contributions during an unprecedented crisis. All workers deserve to be treated with dignity and have safe and sanitary working conditions so they can go to work each day without fear of risking their lives.”

Metering and COVID-19
Stephanie Leutert, Savitri Arvey, Ellie Ezzell, and Marianne Richardson, Strauss Center for International Security and Law, University of Texas at Austin, April 2020
“This report by the Robert Strauss Center at The University of Texas at Austin and the Center for U.S.-Mexican Studies (USMEX) at the University of California San Diego aims to provide an update on how metering’s suspension has affected asylum seekers and metering lists along the border. It also looks at how migrant shelters are preparing for COVID-19 cases among asylum seekers.”

Crisis within a Crisis: Immigration in the United States in a Time of COVID-19
Muzaffar Chishti and Sarah Pierce, Migration Policy Institute, March 26, 2020
“The anxiety triggered by the pandemic for long-term residents and recently arrived immigrants alike, legal and unauthorized, is exacerbated by fear of immigration enforcement, suspension of immigration benefit processing, and the high number of asylum seekers and other migrants in immigration detention.”