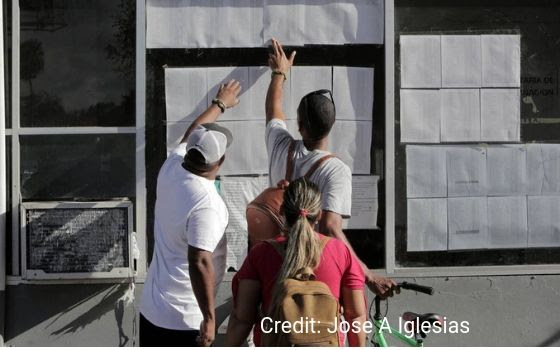 U.S. seeks deal to send asylum seekers from Africa and Asia to Panama
Nick Miroff, The Washington Post, August 21, 2019
“The acting secretary said he is seeking similar deals in Panama, Brazil and El Salvador, part of what he described as a multilateral effort to alight asylum policies across the region among ‘source, transit and destination countries.’ The goal, according to McAleenan, is for those fleeing persecution to find safety in the closest possible to their home countries.”

Top Immigration Officials Gave Asylum Officers The Wrong Instructions on Trump’s New Restrictive Policy
Hamed Aleaziz, Buzzfeed News, August 20, 2019
“That email critically didn’t mention when the person entered the US. Asylum applications can legally be filed within one year of a person entering the country, and hundreds of thousands of people do this every year.”

Thousands of Cubans try to enter the U.S. at a border now practically closed off to them.
Mario J. Pentón, Miami Herald, August 20, 2019
“She could hardly believe what she had gone through…while trying to reach the border: two journeys across Central American jungles; a repatriation to Cuba; persecution by the island’s political police; a kidnapping and ransom in the Mexican border town of Reynosa; an illegal crossing of the rio Grande; and finally her deportation from the United States back to Mexico.”

Trump is Taking More Money for Raids and Detention. Congress Should Stop Him.
Madhuri Grewal & Yesenia Chavez, ACLU, August 19, 2019
“We expect DHS to keep exploiting budget loopholes to get more funding than it received the previous fiscal year. In fact, the agency has been consistently manipulating the budget process – and will continue to do so unless Congress explicitly puts a stop to it.”

How Trump’s Policies Are Leaving Thousands of Asylum Seekers Waiting in Mexico
Jason Kao & Denise Lu, The New York Times, August 18, 2019
“With an average of 34 people allowed to cross each day under a Border Patrol policy known as metering, the waiting time is now estimated to be six to nine months.”

White House moving forward with plan to cancel foreign aid, teeing up fighting with Congress
Jennifer Hansler and Manu Raju, CNN politics, August 18, 2019
“Not only do these cuts have the potential to undermine significant national security and anti-terrorism efforts of our diplomats and international partners overseas, but we fear such a recission package could complicate the ability of the Administration and Congress to work constructively on future approproations deals”.

Asylum Officers Are Being Used As An Immigration Deterrent, Tjersland says
Charles Tjersland & Steve Inskeep, NPR, August 16, 2019
“We’ve had colleagues that have quit. We’re driving away some of the brightest minds, most motivated hearts. Many still remain. Don’t get me wrong. But it’s really a shame.”

ICE Doctor Defends Force-Feeding Detainees on Hunger Strike as ‘Uncomfortable’ But Necessary
Robert Moore, Texas Monthly, August 16, 2019
“At the hearing, attorneys for ICE sought permission to force-feed two men from India who have gone without food for 39 days in a bid to be released on bond while courts decide on their immigration cases. The men have said they will die in jail rather than be returned to certain political persecution in India.”

“Dirtbag,” “Savages,” “Subhuman”: A Border Agent’s Hateful Career and the Crime That Finally Ended It
A.C. Thompson, Pro Publica, August 16, 2019
“Bowen’s arrest and a variety of his ugly texts concerning migrants and others crossing the border illegally have been widely reported in recent months. But court documents and interviews suggest that his checkered career speaks to a much broader problem in the Border Patrol: its inability or unwillingness to identify and discipline problem agents.”

Trump wants border-bound asylum seekers to find refuge in Guatemala instead. Guatemala isn’t ready.
Kevin Sieff, The Washington Post, August 16, 2019
“In the past year, Guatemala has received 226 aylum claims. Of those, not a single one has been processed, according to the government. The country’s asylum agency has eight employees.”

Panel rules soap, sleep essential to migrant kids’ safety
Amy Taxin, ABC News, August 15, 2019
“It should shock the conscience of all Americans to know that our government argued that children do not need these bare essentials.”

Support for Allowing Border Refugees Into U.S. Edges Up
Justin McCarthy, Gallup, August 13, 2019
“Americans are slightly more likely now (57%) than in December of last year (51%) to support allowing refugees from Central America into the US… The largest increase in support has been among Republicans, from 14% in December to 24% now.”

“Leave me in a cell”: The desperate pleas of asylum seekers inside El Paso’s immigration court
Camilo Montoya-Galvez, CBS News, August 11, 2019
“But advocates, attorneys and even some of the asylum officers conducting these non-refoulement interviews say it is almost impossible to satisfy the stringent requirements for the government to allow fearful migrants to stay in the U.S.”

Mexico: The ‘waiting room’ for thousands of migrants trying to get into the US
Monica Cambell, PRI, August 12, 2019
“Thousands of people are on the informal, numbered waiting list. It moves slowly, some days not at all. US government officials say that they have limited capacity to process the number of migrants at the border”.

Mexico’s Crackdown Is Making the Migrant Crisis Worse
John Washington, The Nation, August 9, 2019
“Both shootings came on the heels of the Trump administration’s pressuring Mexico to crackdown on northward US-bound migration. Given the track record of Mexican security forces-the disappearance of 43 students in Ayotzinapa in 2014, the execution-style killing of 22 other people the same year… the thousands of migrants that have gone missing.. It’s hard not to expect anything but more violence.”

Migrants Assess Options as Mexico Buses Them From US Border
Victoria Macchi & Ramon Taylor,  VOA, August 9, 2019
“More than 350 migrants boarded eight buses to Tapachula, Chiapas…Some felt their choice was either to leave or face possible kidnapping or extortion on Nuevo Laredo’s streets”.

Women Are Fleeing Death at Home. The U.S. Wants to Keep Them Out.
Azam Ahmed, New York Times, August 18, 2019
“Latin America and the Carribbean are home to 14 of the 25 deadliest nations in the world for women, according to the available data collected by the Small Arms Survey, which tracks violence globally…In Guatemala the homicide rate for women is three times the global average. In El Salvador, it is nearly six times In Honduras…almost 12 times the global average.”

President Hernandez must end repression of protests in Honduras
Erika Guevara-Rosas, Al Jazeera, August 17, 2019
“The authorities’ excessive use of force violated international law but remains unpunished. This means there is little to deter them from committing more crimes as protests continue to gather pace following a court filing in the United States alleging that Hernandez’s 2013 presidential campaign was funded by drug traffickers.”

The Current Migrant Crisis Was Created by US Foreign Policy, Not Trump
Rebecca Gordon, The Nation, August 16, 2019
“It is absolutely a manufactured crisis, one that should be stamped with the label ‘made in the USA,’ thanks to decades of Washington’s interventions in Central American affairs. Its origins go back to 1954 when the CIA overthrew the elected Guatemalan government of Jacobo Arbenz. In the 1960s, dictatorships would flourish in that country (and elsewhere in the region) with US economic and military backing.”

Guatemala’s New President Won’t Stop Citizens Leaving
Anna-Catherine Brigida, Foreign Policy, August 12, 2019
“‘I wouldn’t think twice if I had the chance to migrate’ said Pineda outside the voting center… He voted for Giammattei but said that he wanted to leave even if his pick won. ‘It’s difficult to even consider [not migrating],’ Pineda said. ‘This country does not let us improve our lives’”.

Tracing the Migrant Journey
KJZZ Fronteras, August 2019
“KJZZ’s Fronteras reporting team is joining migrants as they travel thousands of miles to reach the U.S. This multi-part series puts reporters on the ground from Honduras to Portland,Maine, to document the challenges migrants face on their trek through Central America, Mexico, and the U.S.”

Internal Displacement in the Northern Triangle of Public Policy Guidelines
IACHR, August 20, 2019
“One innovative aspect of the report is that it includes guidelines for public policymaking with a human rights approach to address the issue of internal displacement.”

WRC files complaint with DHS, OIG, AND CRCL regarding ‘Remain in Mexico
Women’s Refugee Commission, August 20, 2019
“The complaint- which includes details of all 20 cases in question- also called for the OIG and CRCL to report on steps taken by U.S. Customs and Border Protection (CBP) and DHS – if any- to track those families separated under RIM.”

IACHR annonces dates and scope of visit to the southern border of the United States of America
OAS, August 16, 2019
“The objective of the visit is to monitor the human rights situation in relation to reception conditions at the border, access to asylum and international protection procedures, conditions of immigration detention and the practices associated with it, asylum and immigration proceedings, as well as procedural guarantees and judicial protection, with a special emphasis on the principles of family unity and the best interest of the child.”

UN Rights expert in first visit to Honduras to assess independence of justice system
OHCHR, August 14, 2019
“The UN expert will consider various forms of threats and issues faced by judges, prosecutors, and lawyers in the exercise of their duties, as well as measures adopted by the State to mitigate the risks to which legal professionals and members of their family are exposed.”