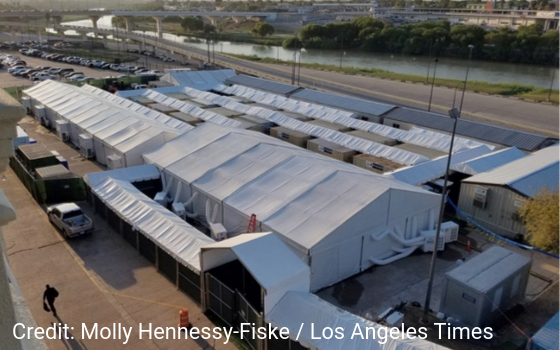 Trapped in Juarez: Life in the Migrant Limbo
J. Weston Phippen, The Atlantic, September 16, 2019
“Juarez is still one of the most violent cities in the world. And for a migrant or asylum seeker, it is arguably worse. Four people in MPP have been murdered since the program began in March. Kidnappings in the city have since doubled. Asylum seekers are particularly vulnerable because they carry large amounts of cash, or have access to family in the U.S. who can wire them money, and criminals know this.”

Salvadorans, Washington’s Builders, Face Explosion Under Trump
Nelson D. Schwartz, New York Times, September 13, 2019
“Roughly a fifth of the capital’s construction workers are in the United States because of the program, known as temporary protected status. Already facing labor shortages, contractors warn that projects will face delays and that costs could rise if the workers are sent home or end up staying illegally.”

Border Courts Swamped with New Cases
Andrew R. Calderon, The Marshall Project, September 13, 2019
“These new cases are being assigned to judges under pressure to complete cases quickly, in places where migrants have little hope of finding lawyers. On average, migrants wait nearly three years for their cases to be completed, due to an unprecedented backlog; and this fiscal year, the denial rate for asylum claims reached 48%.”

An Asylum Officer Speaks Out Against the Trump Administration’s “Super Villain” Attackson Immigrants
Debbie Nathan, The Intercept, September 13, 2019
“The officer suspects malfeasance, however, because ‘CBP officers routinely fake paperwork. Several times a week I would speak to someone whose interview notes with CBP were widely inaccurate, either intentionally or unintentionally’.”

Trump’s New Asylum Ban Will Have an ‘Enormous’ Human Impact
Lelia Ettachfini, Vice, September 12, 2019
The new asylum ban targeting Central Americans, however, has the potential to become even more harmful than the Muslim ban, which is already in place. “The ban turns the border into a virtually asylum-free zone. In that way, its scope and impact could be even more largely felt than the Muslim ban,” said Krishnaswami.

Hasty rollout of Trump immigration policy has ‘broken’ border courts
Mica Rosenberg, Kristina Cooke & Reade Levinson, Reuters, September 10, 2019
“Rather than being released into the United States to coordinate their own transportation and legal appearances, migrants in MPP must come and go across the border strictly under U.S. custody. Some migrants have turned up in court only to find that their cases are not in the system or that the information on them is wrong, several attorneys told Reuters”

Tent courthouses for migrants to open along Texas border, as questions abound
Molly Hennessy-Fiske, Los Angeles Times, September 9, 2019
“Months after construction began, much about Homeland Security’s $25-million tent courts in South Texas remains a mystery, even to lawyers who expect to represent their migrant clients as soon as this week. What day the hearings will begin, where lawyers should file paperwork and even whether attorneys can meet their clients beforehand — all remain unanswered questions in this border town.”

Border arrests continued to drop in August amid Trump crackdown
Ted Hesson, Politico, September 4, 2019
“Border Patrol arrested roughly 51,000 migrants in August, a 30 percent drop from the previous month.The latest figures signal that counter-migration measures instituted by the Trump administration may be reducing the number of border crossers. Border arrests rose from July to August in eight of the last 10 years, which suggests the current drop is not related to recent historical patterns.”

2019 Among Deadliest Years for Migrants Trekking to US
Victoria Macchi, Voa, September 4, 2019
“…this year, with an unprecedented number of families with young children crossing into the U.S. without authorization, Border Patrol agents in Eagle Pass say they are conducting more than four times as many rescues as last year — 476 so far in the current fiscal year compared to 111 during the same period a year earlier.”

Mexico says it disagrees with US Supreme Court order
Christopher Sherman, Associated Press, September 12, 2019
“…the ruling is likely to drive more Central American migrants to try to illegally enter the U.S. with the help of smugglers or move them to apply for asylum in Mexico, which is already swamped with applications.”

Migrants taking free U.S.-government funded trips home may not be able to re-enter Mexico
Wendy Fry, Los Angeles Times, September 10, 2019
“…there’s no guarantee the migrants will be able to return through Mexico. “No mechanism has been put into place to guarantee when they leave southern Mexico and hand back over their humanitarian visa that they would have another migratory form given to them at a later date,” said Gascon, who said his agency makes that clear to people.”

More Cubans seek asylum in Mexico amid clampdown on legal path to US
Nina Lakhani, The Guardian, September 3, 2019
“In the first seven months of this year, 4,604 Cubans applied for asylum in Mexico, representing 10% of all applicants. In 2018, 218 Cubans sought asylum, representing 1% of total applicants. Historically, US-bound Cubans encountered far fewer obstacles on the migration passage due to unique legal protections and economic and educational advantages compared with Central Americans.”

Criminals Target Migrants In Mexico Seeking U.S. Asylum
John Burnett, National Public Radio, August 27, 2019
“The Mexican government has been cooperating with Trump’s immigration agenda after the president threatened that country with steep tariffs in June. In addition to accepting migrants returned under MPP, Mexico has deployed security forces to its own borders to block migrants from going north.”

African migrants trapped in Mexico protest for right to travel to USA
Chloe Lauvergnier, The Observers, August 27, 2019
“Hundreds of African migrants have taken part in a series of protests in Tapachula, a Mexican town near the border with Guatemala, since August 18. The protesters, who have been trapped in the town for weeks, are demanding documents so they can travel north to the United States and Canada. Due to pressure from the United States, Mexico has been cracking down on migrants.”

United Nations to aid El Salvador anti-corruption body
Nelson Renteria, Reuters, September 12, 2019
“Bukele said the new body, which also has the backing of the Organization of American States (OAS), will begin by investigating 105 government offices before seeking additional agreements with the country’s attorney general, the Supreme Court and Congress to expand its powers.”

El Salvador sends hundreds of police to border to thwart migrants
Reuters, September 11, 2019
“The police will be backed up by another 350 immigration officials who will review identification and travel documents of migrants seeking to cross, according to a Salvadoran government official.”

Guatemala declares state of emergency after soldiers killed
Associated Press, Washington Post, September 4, 2019
“The government of Guatemala has declared a state of emergency that temporarily suspends some rights in parts of the country’s north after suspected drug traffickers killed three members of a military patrol.”

Honduras – Women’s rights in a country marked by violence
Edna Ortega, The Koff Peacebuilding Magazine, September 2019
“In Honduras, there is a patriarchal society. Those are hate crimes. This patriarchism is nourished by the Church and the media and manifests itself in the form of machismo. We hear for example a lot about women who work in big companies, whose labor rights are violated and who get abused. They cannot get any help, because the institution that is supposed to help them will not support them and even worse, they may abuse the women as well! It is a structural problem.”

The World Isn’t Ready For Climate Refugees
Maggie Koerth- Baker, FiveThirtyEight, September 12, 2019
“But unlike victims of war for whom the causes and effects of the threats are clear and codified, there are no protections for environmental migrants. That’s despite World Bank estimates that tens of millions of people could be climate refugees by 2050, research showing asylum seeking already increases in response to climate-related issues like rising temperatures, and the fact that researchers have been talking about the plight of people who must escape not-entirely-natural disasters since at least 1988.”

100 Days of Nayib Bukele in El Salvador: Social Movement Perspectives (Interview)
NACLA, September 9, 2019
“On matters of immigration and security, Bukele has openly signaled concession to the United States. When the lives of Oscar Alberto Martinez Ramírez and his 23-month-old daughter, Valeria, were taken crossing the Rio Grande River, instead of denouncing U.S. migration policies that criminalize refugees and routinely subject them to violence, Bukele put the blame on Salvadorans, calling the deaths “our fault.”

More Than a Wall: Corporate Profiteering and the Militarization of US borders
Todd Miller, TNI, September 16, 2019
“This report examines the role of the world’s largest arms (as well as a number of other security and IT) firms in shaping and profiting from the militarization of US borders. Through their campaign contributions,  lobbying, constant engagement with government officials, and the revolving door between industry and government, these border security corporations and their government allies have formed powerful border–industrial complex that is a major impediment  to a humane response to migration.”

Refugees Returned to Mexico Face Physical & Psychological Torture in US, Danger in Mexico
Laura Carlsen, The Real News Network, September 1, 2019
“Laura Carlsen spoke to asylum seekers in Tijuana, Mexico, who were turned back at the US-Mexico border. They tell about harrowing experiences with US border patrol and the dangers they face in Mexico.”

Saliendo Adelante – Why migrants risk it all; Brief on Creative Associates International’s research study into the differentiating factors of migration from the Northern Triangle
Creative Associates International, September 2019
“If the global development community is to respond to the ongoing but constantly shifting migration crisis, it requires nuanced and in-depth data that go beyond common knowledge of the region’s economics and security situation.”

Fact Sheet: the CICIG’s Legacy in Fighting Corruption in Guatemala
Washington Office on Latin America, August 27, 2019
“The following Q&A provides facts and context essential for understanding the CICIG’s role and successes in the fight against corruption and organized criminal networks in Guatemala—and what the future holds for anti-corruption efforts in the country after the CICIG expires.”

Violence, Corruption & Impunity in the Honduran Energy Industry: A Profile of Roberto David Castillo Mejia
School of the Americas Watch, August 2019
“This report gathers information about Castillo’s business activities and related legal cases, including indictments for murder and corruption. This information suggests that Castillo has engaged in a pattern of criminal activities, including significant acts of corruption while he served as a government employee, and grave human rights violations.”