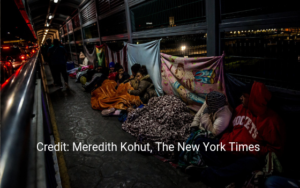 In a border detention center, art helps migrant kids remember home
Tanvi Misra, Citylab, April 19, 2019
“The models are particularly intricate, and infused with nostalgia: […] The kids may have been escaping poverty and violence, but the art they made at Tornillo was reflected the good memories they had of home.”

Militia in New Mexico detains asylum seekers at gunpoint
Simon Romero, The New York Times, April 18, 2019
“Members of the group, which calls itself the United Constitutional Patriots, filmed several of their actions in recent days, including the detention this week of a group of about 200 migrants who had recently crossed the border near Sunland Park, N.M., with the intention of seeking asylum.”

The real border crisis is occurring in medical and emergency clinics
Claire Lamneck, Stat News, April 10, 2019
“The real border crisis is what hospitals near the southern border see every day. It manifests as broken bones, lost appendages, and severe dehydration. It is the thousands of people marooned in ICE detention centers. It is the families seeking asylum who are met with violence. It is the people who have vanished on both sides of the border. It is the thousands who have died on their journeys to seek better lives in the United States.”

These immigrants contribute $4.6 billion in taxes. Trump’s trying to strip their legal status.
Alexia Fernandez Campbell, Vox, April 17, 2019
“About 9,000 janitors and maintenance workers from El Salvador — many of whom have TPS — have been sweeping, scrubbing, and vacuuming government buildings in Washington, DC, for decades. They have cleaned places like the US Department of Justice, the US Department of Agriculture, Ronald Reagan National Airport, and Walter Reed National Medical Center, where members of Congress and presidents are treated.”

Honduran transgender woman freed after a year in US detention
Nina Lakhani, The Guardian, April 19, 2019
“She was detained in America’s only specialized unit for transgender people, in the privately operated Ice facility in Cibola County, and was granted asylum by an immigration judge on 9 October last year. Ice appealed, and García was transferred to the facility’s male unit. After a couple of weeks there she was sent to solitary confinement where she spent nearly three months.”

Barr’s decision to eliminate bonds for certain asylum-seekers, explained
Alexandra d’Elia, PBS News, April 17, 2019
“Under Barr’s policy, the Department of Homeland Security could still release immigrants on parole, but it takes away the authority of immigration court judges to make that decision, something they’ve been allowed to do up until now.”

Government Will Help 2,700 Central American Children Reunite With Their Families After Court Settlement
Erica Cruz, Immigration Impact, April 16, 2019
“Forcing the administration to process these applications is a major victory for families. It shows the government can take proactive measures to help those fleeing violence. But the scope of this victory is limited as the CAM program will not be processing any new applications.”

Attorney General Barr just handed ICE more power to keep asylum seekers in detention
Dara Lind, Vox, April 17, 2019
“People who come without papers to ports of entry are explicitly excluded from that regulation. People who arrive between ports of entry, crossing illegally, are not. So the question is whether asylum seekers who arrive illegally but pass their screening interviews are eligible for a bond hearing as well as parole, or just for parole at the discretion of ICE officials.”

US wants to build more tents at border to detain migrants
Nomaan Merchant and Cedar Attanasio, ABC News, April 16, 2019
“Each facility would consist of one large tent that could be divided into sections by gender and between families and children traveling alone, according to the notice. Detainees would sleep on mats. There would also be laundry facilities, showers, and an additional fenced-in area for outside exercise/recreation.”

Press Release: Government and Central American Families Reach Historic Settlement, Paving the Way for Children to Reunite With Parents in the U.S.
Henrike Dessaules and Nicole Houston, International Refugee Assistance Project, April 12, 2019
“The government and plaintiffs in S.A. v. Trump, the lawsuit challenging the Trump Administration’s termination of the Central American Minors Parole program, agreed on a historic settlement that may allow approximately 2,700 children living in dangerous conditions in Central America to safely reunite with their parents in the U.S.”

Rule Keeping Asylum Seekers in Mexico Can Temporarily Proceed, Court Says
Mihir Zaveri, The New York Times, April 12, 2019
“Judge Seeborg said in his ruling that the protocols did not include “sufficient safeguards” to comply with the Department of Homeland Security’s obligation against returning migrants to places where their “life or freedom would be threatened.”

Trump’s policy forcing asylum-seekers to wait in Mexico has been temporarily allowed by a federal court
Hamed Aleaziz, BuzzFeed News, April 12, 2019
“The ACLU’s lawsuit was focused Migrant Protection Protocols, the most recent attempt by the Trump administration to discourage migrants, including asylum-seekers, from trying to enter the US.”

Border Patrol holds hundreds of migrants in growing tent city away from prying eyes
Justin Glawe and Justin Hamel, Daily Beast, April 15, 2019
“Five U.S. Army tents meant for battlefield hospitals have been repurposed to hold men, women, and children, including infants. Two of the tents were erected over the past week, expanding the facility’s capacity by several hundred people. The tents are tightly surrounded by fences topped with barbed wire, leaving virtually no space for people to roam outside.”

Federal Court Blocks Trump’s Termination of Humanitarian Status for Haitians
Paromita Shah, National Immigration Project, April 12, 2019
“Judge Kuntz’s findings indicate that the White House pressured federal agencies to change their longstanding practices to reach a decision sought by the Administration for its own purposes, and that these same federal agencies manipulated facts and processes to justify a predetermined decision to end Haiti’s TPS status”

“He actually prefers the chaos”: Stephen Miller, immigration warlord, emerges from the shadows
Abigail Tracy, Vanity Fair, April 14, 2019
“In many cases, it seems, the dividing line in the Trump administration is not necessarily between moderates and hardliners, but between immigration officials who respect the spirit of the law and those who are willing to break it.”

A Honduran asylum-seeker was brutally murdered after being deported – from Mexico
Eileen Grench, The Intercept, April 13, 2019
“According to a Migration Policy Institute analysis of both U.S. and Mexican deportations, from 2015 to 2017, Mexico had already deported roughly 409,000 Central American migrants, nearly double the number of its northern neighbor.”

Frustration grows among migrants in Mexico as support fades
Sonia Perez, AP News, April 21, 2019
“Members of the caravan in October received food and shelter from town governments, churches and passers-by. Drivers of trucks stopped to give them a lift. Little of that is happening this time. And local officials who once gave them temporary permits to work in Mexico, now seem to snare them in red tape. Truckers and drivers have been told they will be fined if caught transporting migrants without proper documentation.”

In Honduras, young people are surviving day to day
Alianza Americas
“In primary education, the coverage is 94% of children but, in middle and high school, it is only 31%. Sixty-nine percent of teenagers do not finish their schooling. Most of them have to work. There is a high dropout rate.”

Rehabilitating El Salvador gang members have message for Trump
France 24, April 16, 2019
“We’re people like everyone else: human beings. We’ve changed and we’re showing that those gang members deprived of liberty can contribute something positive to society.”

Central American Farmers Head to the U.S., Fleeing Climate Change
Kirk Semple, The New York Times, April 13, 2019
“Gradually rising temperatures, more extreme weather events and increasingly unpredictable patterns — like rain not falling when it should, or pouring when it shouldn’t — have disrupted growing cycles and promoted the relentless spread of pests.”

The Aid Paradox
Laura Weiss, North American Congress on Latin America, April 1, 2019
“The distinction between security and development aid is not insignificant—there’s no doubt that these countries would benefit from judicial reform, and the U.S. also helps fund a number of NGOs in the region doing good work.”

Record number of people murdered in Mexico this year
Aljazeera, April 22, 2019
“Mexico has recorded nearly 250,000 murders since deploying the army, including last year’s record as the newly fragmented cartels battle the military and each other, with widespread collateral damage.”

Guatemalan presidential candidate held over ‘drug plot’
BBC News, April 18, 2019
“Estrada and Gonzalez conspired to solicit Sinaloa Cartel money to finance a corrupt scheme to elect Estrada president of Guatemala. In return, the two allegedly promised to assist the cartel in using Guatemalan ports and airports to export tons of cocaine into the US.”

Gov. Gavin Newsom pledges to help build up El Salvador to reduce migration
Taryn Luna, Los Angeles Times, April 15, 2019
“Gangs extort small businesses and kill those who dare to cross boundary lines in some El Salvador neighborhoods. Police and military have been accused of brutalizing their communities. Women have been imprisoned for having miscarriages, and the Central American country’s LGBTQ citizens face discrimination. Nearly one-third of Salvadorans live in poverty.”

KIND Statement on Homeland Security Advisory Council’s Recommendations for Children in Government Care
Kids in Need of Defense, April 17, 2019
“Far from protecting children and preventing them from undertaking dangerous journeys to the U.S., as the report asserts, these recommendations risk further harm and trauma, and the return of thousands of children to harm, danger, and death.”

Cities and Counties Stand to Benefit From the American Dream and Promise Act
Nicole Prchal Svajlenka, Center for American Progress, April 17, 2019
“Recognizing immigrants’ importance to their communities, more than 175 local elected officials, representing cities and counties of all sizes, have joined the Cities for Action coalition. In its work, the coalition advocates for the federal government to adopt policies supporting immigrants and their families at the national level.”

Promising Returns: How Embracing Immigrants with Temporary Protected Status can Contribute to Family Stability, Economic Growth, and Fiscal Health
Dalia Gonzales, Thai Le, Manuel Pastor, and Nicole Svajlenka, USC Dornsife, April 15, 2019
“Many of these individuals with TPS or DED have been in the United States for quite some time, as some of the requirements for these statuses necessitate individuals to have been present in the United States as early as the 1990s. As a result, many individuals with TPS have long records of working hard, purchasing homes, and even establishing businesses.”

Barred at the Border: Wait “Lists” Leave Asylum Seekers in Peril at Texas Ports of Entry
Human Rights First, April 2019
“Customs and Border Protection (CBP) agents have physically blocked access to ports of entry and refused to refer people seeking asylum to a protection screening interview or immigration court proceedings where they can request asylum.”