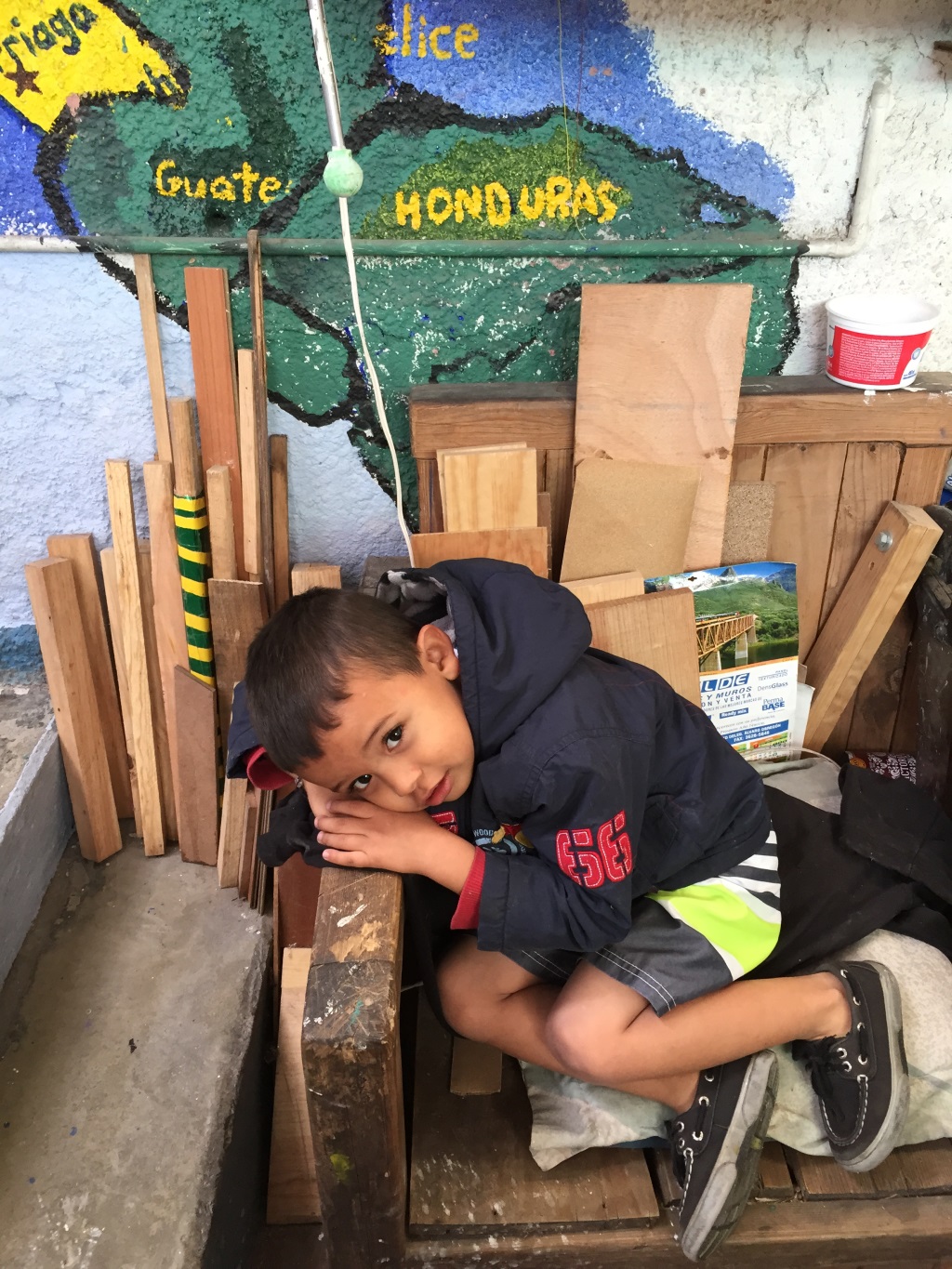 Carlitos, 4-year-old from Honduras, poses by his native Honduras on the map painted on the wall of Casa Tochan, Mexico City. Photo credit: Emma Buckhout.In January, I had the opportunity to visit two migrant shelters in Mexico City. While cosmopolitan Mexico City draws immigrants and expats from all over the world, it has not traditionally been a prime destination, or even a way station, for Central American migrants. Traditional migrant routes north took them outside the city. Yet, as the cases of these two shelters illustrate, corresponding with increases in violence in the Northern Triangle of Central America and increased migration enforcement operations in Mexico, Mexico City is receiving a growing number of migrants, including children, women, and family units who are increasingly hurt and in need of protection.

Compared to other shelters along the migrant route through Mexico, the two shelters—Casa Tochan (which means “our house” in the native language of Nahuatl) and CAFEMIN, or Casa de Acogida, Formación y Empoderamiento de la Mujer y Internacional y Nacional (House for Shelter, Training and Empowerment of International and National Women)—are relatively small. However, they are among only a handful of shelters in Mexico City, and provide a variety of services for migrants in the dearth of government aid available to them, even in the capital city. A shelter worker in Tochan told me that the government has hardened its stance toward migrants as more have arrived in the city—for example, while migrants used to be able to get access to a homeless shelter that opens during the winter, now it’s nearly impossible. 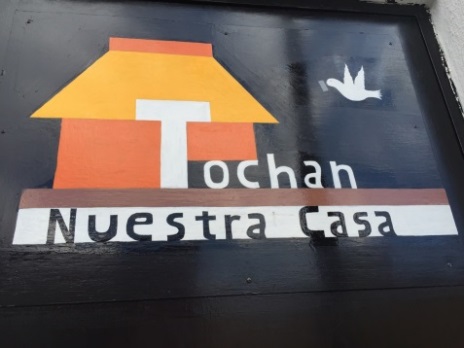 Door of Casa Tochan, Mexico City. Photo credit: Emma Buckhout.Casa Tochan was founded four years ago by several civil society organizations in seeking to provide a safe house for the increasing number of migrants arriving with no place to stay. It has 18 beds, mostly for men, with two in available for women as well. The volunteer director, Gabriela, recounted how that flow of migrants, primarily from the Northern Triangle, but occasionally from South America and Africa as well, has continued to increase since around August 2014 to the point that the shelter is routinely over capacity and people sleep on mattresses on the floor. Over the Christmas holidays, traditionally a time of less migration, in 2012 and 2013 Tochan had only two and then five migrants staying there; but the last two years the shelter was full to capacity. While many migrants arrive “de paso” (in passing) for just a few days to rest and recuperate, many are there for up to three months, as Gabriela and other volunteers assist those who have been victims of kidnapping or assault to apply for a humanitarian visa or perhaps asylum. They also help the migrants find employment—there is a small woodworking space for those who wish to learn a craft while in the house—and migrants often sell artisan crafts or food to support themselves during their time in Mexico.

CAFEMIN’s logo painted on the wall of its patio, Mexico City. Photo credit: Emma Buckhout.Across the city, CAFEMIN was founded over three years ago in an abandoned high school building which the seven nuns and various volunteers who run the shelter have adapted to serve as housing, kitchen, library, and workshops as possible. CAFEMIN is designed to house women and family units, as well as some single men, and as the largest shelter in the city, it coordinates with Tochan and other civil society organizations to make sure migrant families have a place to stay. It faces the same challenges of increased migrant flows in the last two years; in its first year it received 10 or 15 migrants at most at a time, in 2015 it housed 40 to 50 daily, with whole families sometimes having to sleep on the floor. Like Tochan, some are only there for a few days, but the migrant profile in Mexico City, especially among family units, increasingly includes those seeking asylum or pursuing other legal processes. 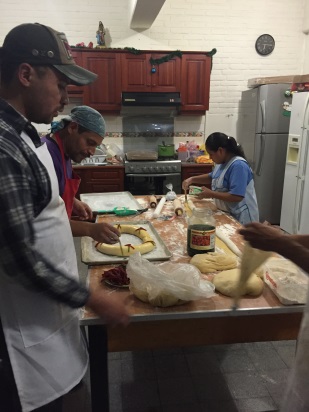 Expert bakers, volunteers, sisters, and migrants make artisanal “Roscas de Reyes” in CAFEMIN, Mexico City. Photo credit: Emma Buckhout.In addition to accompanying migrants during a variety of visa, asylum, or refugee legal processes, CAFEMIN coordinates a series of workshops and courses for migrants to help provide them with work training as well as psycho-social accompaniment. I was there on Three Kings Day and their kitchen was a bustle with sisters, volunteers, and migrants staying in the shelter, making the Mexican artisan bread that is customary for the holiday.

Sister Magda, one of the founders of CAFEMIN, reflected that while migration from Central America through Mexico used to be for economic reasons, now it´s forced from violence. She shared the case of a mother, Paula, and her 17-year-old son, Mauricio, who had come to CAFEMIN earlier that year after the Paula’s brothers had been killed in El Salvador. Thanks to the assistance of CAFEMIN, the mother and son were granted refugee status in Mexico. However, with no other family or prospects to make a living in Mexico, they chose to continue the journey to the United States where they were apprehended by Border Patrol. Paula, who was later diagnosed with a tumor in her throat remains in the United States awaiting medical treatment, but Mauricio was deported after his eighteenth birthday. CAFEMIN fought to have him deported back to Mexico, where he has refugee status, rather than be deported back to his death in El Salvador. (Mauricio is currently staying at CAFEMIN while its staff and U.S. advocates are fighting to reunite him with his mother, but we don’t yet know if it will be possible.)

Cases of family units seeking asylum in Mexico are all too common given the current context in the Northern Triangle, where levels of violence have been steadily climbing. In 2015, El Salvador surpassed Honduras as the country with the highest homicide rate not at war, though Honduras and Guatemala follow closely behind. Violence from gangs and organized crime, corruption and abuse by security forces, particularly in El Salvador and Honduras, leave people without any safe havens and few options but to flee north.

Unlike this case of the Paula and Mauricio who received support from CAFEMIN, most asylum seekers from Central America do not have access to legal counsel to help them obtain refugee status in Mexico or even know that they can seek protection. The Mexican refugee agency, Comisión Mexicana de Ayuda a Refugiados (COMAR), remains understaffed, and with only three offices it lacks presence in the majority of the country. While the numbers of refugee applications is steadily increasing in Mexico, it is still estimated to fall far short of the number of migrants who could potentially qualify. Of the cases that are opened, many are abandoned by migrants who have been discouraged by authorities, or don’t wish to wait out a several month process in Mexico, especially if they are in a government detention center instead of a shelter. According to COMAR’s official statistics, of the 2745 asylum cases registered in the first ten months of 2015, only 70% were concluded, and of those, only 36% were granted.

As more asylum seekers arrive in Mexico from Central America, Mexican migration enforcement has also been strengthened with U.S. support, putting already vulnerable migrants at even greater risk. As Gabriela from Tochan said, “More migrants are coming, and they’re arriving more hurt.” My meeting at CAFEMIN was interrupted by Edwin, a twenty-one year-old from Honduras, coming to get a bag of prescriptions from Sister Magda. He, his twin sister, and her two-year-old child, had been violently attacked while riding the train outside the city in the neighboring state of Mexico. Edwin was badly beaten and left tied to a pole. Fortunately he was rescued by the Red Cross of Mexico, who brought him to CAFEMIN instead of allowing him to be taken to a migrant detention center by authorities from the Mexican immigration agency (Instituto Nacional de Migración, INM). Sister Magda helped him get medical attention, but he was still traumatized with no idea where his sister and her baby were. Sister Magda, while checking her phone for news if any other nearby shelters had seen her, said they would report the crime to the government in the next day if they didn’t hear anything.

Mural of “La Bestia” painted by a migrant from El Salvador, CAFEMIN, Mexico City. Photo credit: Emma Buckhout.In 2014, Mexico’s President Enrique Peña Nieto announced the implementation of a new Southern Border Plan, which was supposed to “implement actions for the respect of human rights and the safe transit of migrant flows.” However, both shelters and other migrant rights advocates in Mexico report it has done anything but. Before, migrants passed through Mexico City on the train known as “La Bestia” without stopping. Now, that train route has become more dangerous because are being violently attacked at greater rates. While Edwin could not identify who attacked him, his case coincides with reports from migrant shelters and civil society advocates of migrants being shot at by private security guards in other states in the center of the country, near Mexico City. The perpetrators of these crimes are unclear and frequently remain in impunity, but are well known to involve law enforcement agents acting in collusion with organized crime. Additionally, migrant are finding other, potentially more dangerous and exposed routes. Many migrants are walking farther to avoid attacks on the train or at check points. Casa Tochan reported more migrants are arriving alone, instead of in groups.

While there is confusion as to whether or not migrants are taking the train, I was able to confirm that at least many who make it to Mexico City are still using that route. However, there are rumors that the train companies will increase the speed soon, making it even more dangerous. Sister Magda was also monitoring her phone for updates on another man who had been brought to CAFEMIN the day before my visit. However, his body was so badly mangled from falling off the train that she was desperately trying to get him into a hospital. And yet despite these dangerous conditions and human rights violations in Mexico, men, women, and children, continue to risk their life to escape the violence in their home countries and seek asylum. 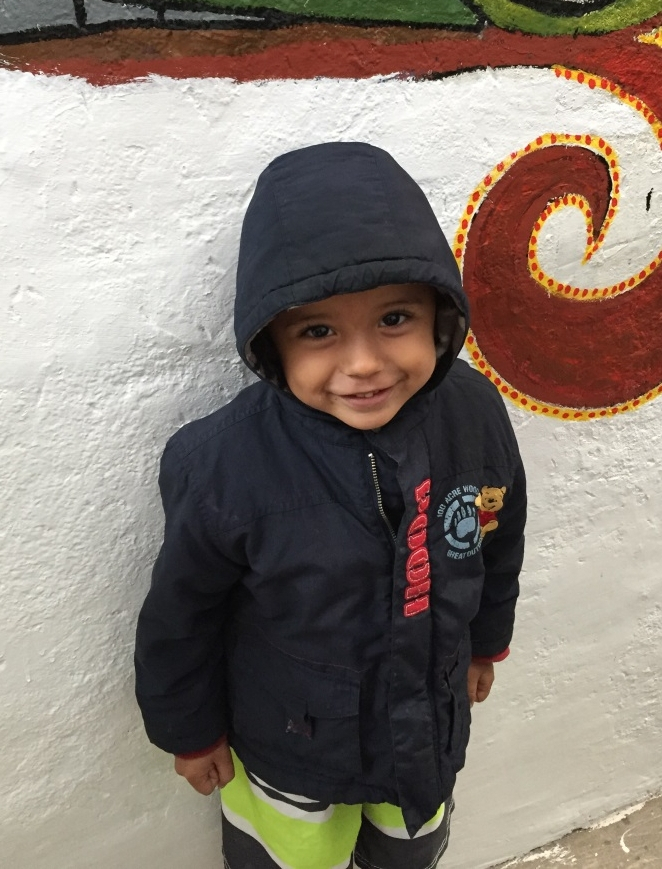 Carlitos is all smiles when coaxing volunteers to play with him at Casa Tochan, Mexico City. Photo credit: Emma Buckhout.

Were it not for Casa Tochan and CAFEMIN and the brave volunteers like Gabriela and Sister Magda, these migrants would not have access to the services and support they so desperately need on their journey to seek protection and safety. As my conversation with Sister Magda spiraled farther into the depths of the horrific challenges forcing children, women, and men from their homes in the Northern Triangle, and then awaiting them on the journey through Mexico, Sister Magda echoed my thoughts by asking, “How do you give them hope?” Yet the images of a young woman from Honduras joking with the baking team in the kitchen, a young boy excitedly rushing out to help sell the homemade bread on the street, a four year-old zooming around the patio on a scooter, young men, including Edwin, bidding me farewell with smiles on tired faces, and neighbors bringing by food donations, confirmed to me that she and so many other migrant rights defenders are doing just that for the migrants that somehow arrive at their door.