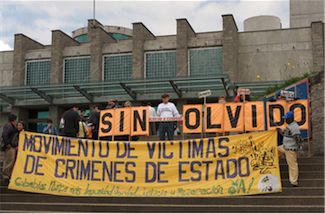 Our Colombian partners need our help!

This Tuesday, March 6th, the National Movement of Victims of State Crimes (MOVICE) will lead rallies across Colombia demanding protection, respect, and complete return of lands to those who have had to flee their homes due to paramilitary, guerrilla and army violence in Colombia.

Will you add your name to our letter supporting their march and calling for their protection? (Para leer y firmar la petición en español, haga clic aquí.)

Our friends at MOVICE are putting themselves at a huge risk to do this public mobilization. Past marches like this have resulted in violence against participants, and this year’s organizers have already started receiving threats from paramilitary groups. But they feel that they have no other choice if they want the voices of Colombia’s victims of violence to be heard.

As members of the international community, we can play an important role in ensuring their safety by showing that we are watching and we stand with these brave activists in their quest for truth, justice, and reparations. In the next few days, we need to gather thousands of signatures on a letter to President Juan Manuel Santos asking him to protect them as they march and respond to their demands for human rights and meaningful land return. This letter will be presented at a press conference before the march, so we have no time to waste in getting signers!

Will you sign on today and gather signatures from your community too?

This past year, the Colombian government has passed a “Victim’s Law” that is supposed to return lands to Colombia’s massive internally displaced population.  While this a is step in the right direction, MOVICE claims that victims have not had a voice at the negotiating table. They fear that without major attention to the protection and needs of the victims, this legislation will not solve the displacement crisis and will maintain impunity for those responsible for mass land theft in Colombia.

Families and communities cannot return to their land only to face new threats and be displaced again; over 20 land rights leaders have already been killed since August 2010.   During this march, victims of violence will demand real progress in prosecutions of those responsible for forced displacement, as well as effective measures to protect the victims who have been threatened for demanding their rights.

Will you ask the Colombian government to protect those who speak out on Tuesday?

We’ll keep you updated on what happens as we get more news from the ground.