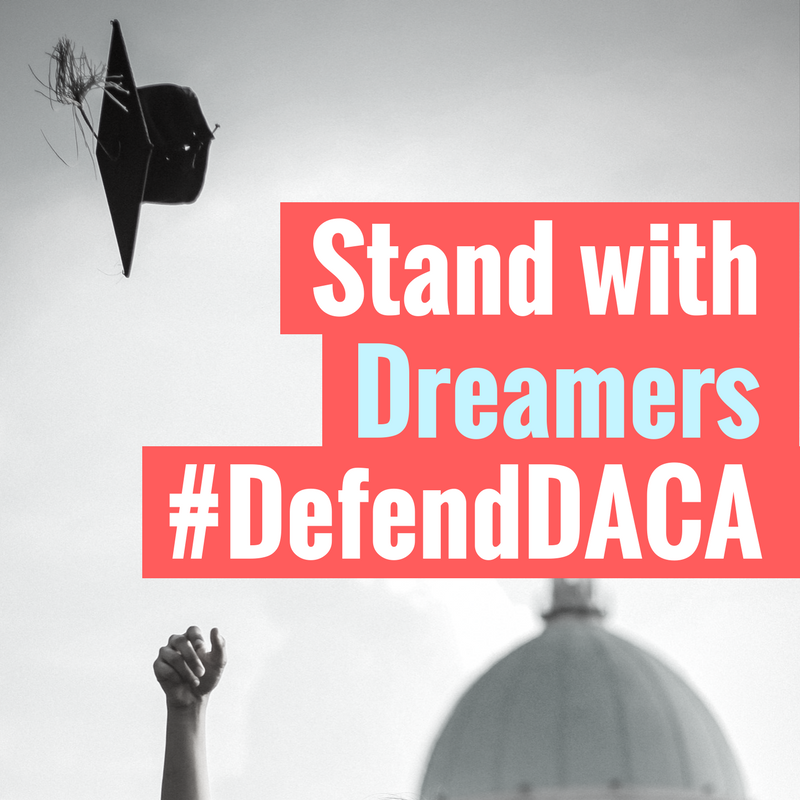 Our nation was built on the idea of the American dream. Yet some leaders don’t think it applies to everyone. Nine* anti-immigrant Attorney Generals are threatening to sue if President Trump doesn’t end Deferred Action for Childhood Arrivals (DACA) by September 5th. And news sources say he may soon bend to their demands. But we can’t let that happen.

Nearly 800,000 youth living and working in the United States could lose everything. If Trump moves to end DACA,  these driven and valued members of our community will be immediately at risk of deportation.

This may be your last chance to act. Join us TODAY (Thursday, August 31st) for a national call-in day to tell our elected leaders to #DefendDACA!

*On Friday (September 1st), the Tennessee Attorney General released a statement indicating that he would not sue, lowering the number from ten to nine.

*Please call your 1 Representative and then your 2 Senators

Sample Script to Representative/Senators:
“Hi, my name is X and I’m calling from City, State and my zip code is X. I’m deeply concerned about the reports that President Trump could end the Deferred Action for Childhood Arrivals (DACA) this week. I support the program and strongly oppose any attempt to terminate or alter it. I urge the Senator/Representative to do everything in his/her power to protect 800,000 DACA-recipients from deportation and support their right to work and study in this country. There are three things I’m hoping your office will do right now. Can the Senator/Representative (1) appeal directly to the President to keep this program in place, (2) issue a public statement of support for DACA recipients, and (3) support a clean passage of S.1615/H.R.3440, the Dream Act of 2017?”

Sample Script for President Trump:
“Hi, my name is X, and I’m from [City, State]. I support the Deferred Action for Childhood Arrivals (DACA) program, and strongly oppose any attempt to terminate it or phase it out. DACA has provided nearly 800,000 young people the opportunity to pursue their dreams. I urge you to defend the DACA program well beyond September 5, protect DACA recipients from deportation and detention, and work with Congress toward a permanent solution.”

Both President Trump and Members of Congress must hear from you. Join us in demanding that DACA remain in place until The Dream Act 2017 passes! No matter what, we must support these members of our communities.

This action is in coordination with the national call-in day organized by our partners at the Interfaith Immigration Coalition. Find more details on how to act through their announcement.