Nelson Arambú, of Honduras: “We Do Not Want to Come Back Here Next Year to Report More Murders of the LGBT Community”

Nelson: When Pepe Palacios was here in the U.S. last year he reported 115 murders in the LGBT community from the coup in June 2009 until the time of his visit in February 2013. I am now reporting that that figure has increased by 61 murders to 176.

Something that I have noticed when addressing LGBT audiences here in the U.S. is the fact that they are often shocked by these statistics. Because they enjoy relatively more rights than their counterparts in other countries, it is often very difficult for American LGBT people to understand what it means to be LGBT in Honduras and the reason why we come back to the U.S. every year to highlight what is happening on the ground. In Honduras, instead of fighting for marriage equality, as our LGBT counterparts here in the U.S. are doing, we are fighting for the basic right to not be murdered. It is a far cry from fighting for marriage equality, which is why it is so important for us to come back every year to update congressmen and the American public on the wellbeing of the Honduran LGBT community. 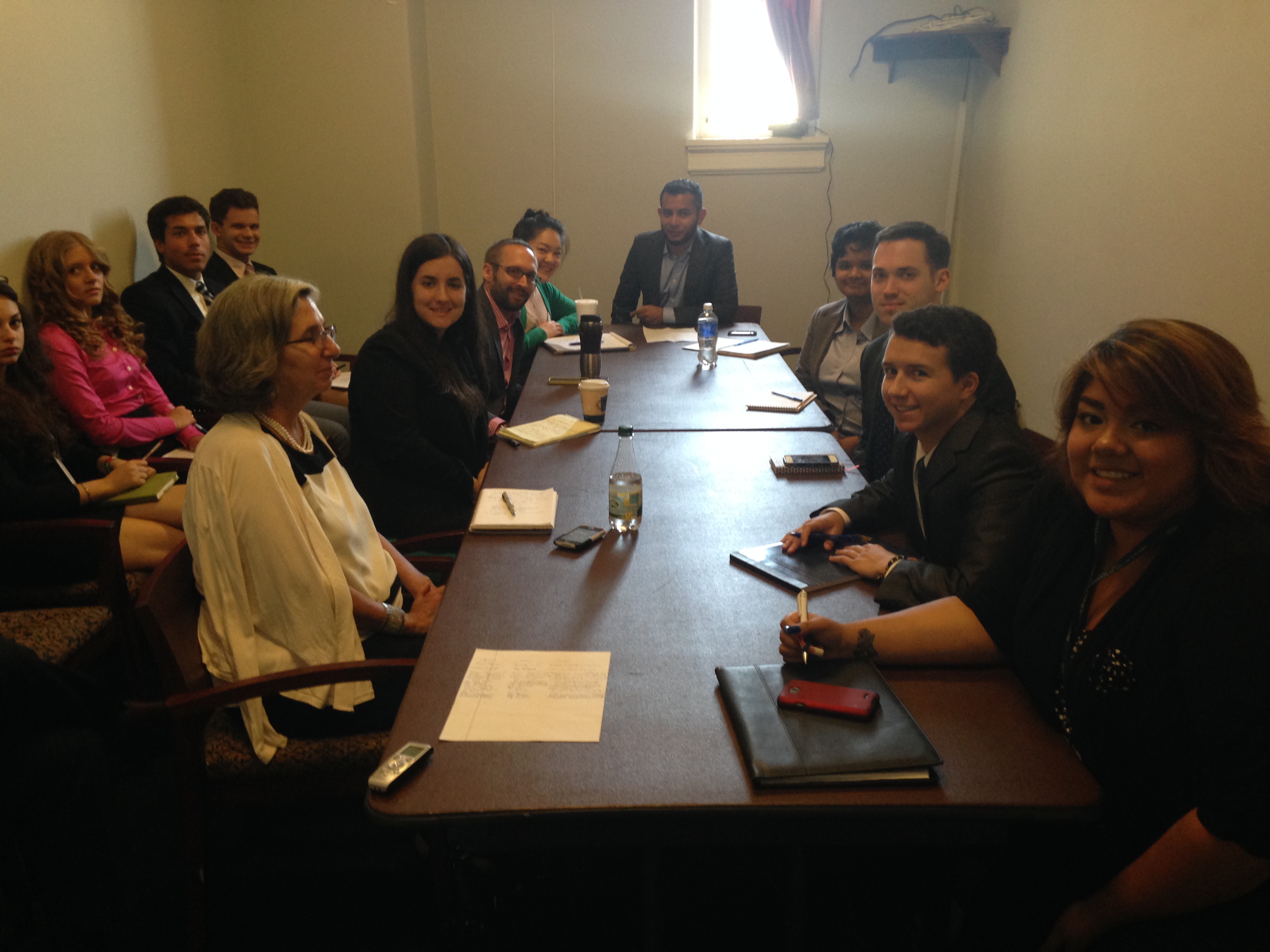 CREDIT: Sergio Moncada.Partly from pressure from the U.S., a special victims’ unit was created within the Honduran Public Ministry which is charged with investigating crimes against the LGBT community. This unit has had assistance from the FBI; however, in the 2.5 years since the unit was created, not one single murder has been resolved. There has been very little accountability on what the unit is doing. The only degree of pressure has come from the U.S. embassy in Honduras.

The efforts by the Honduran state to limit human rights have been demonstrated by the dismantlement of any institutionalized protection of human rights by mostly shutting down government institutions charged with promoting and protecting the human rights of vulnerable sectors of the population –such as women, children, indigenous communities, and Afro-Hondurans.

We hope is to increase international pressure for three things: the first is to keep the issue of human rights in Honduras alive. The result of this issue falling through the cracks has been that 25,000 people have been murdered in the last 5 years. Take just the example of the LGBT community: when Erick Martinez came to two years ago, he reported the murder of 75 LGBT people. When Pepe Palacios was here last year, he reported 115 murders and now I am here reporting a figure of 176 murders. Obviously this figure is increasing every year and we cannot let this fall through the cracks. We urgently need a UN High Commissioner on Human Rights office to be opened in Honduras. In light of the government dismantling entities previously charged with protecting and promoting human rights for vulnerable groups, there is an urgent need for an international government body that can promote and protect our rights.

One of the things we ask is for the U.S. Embassy to make more consistent statements regarding human rights. In the opinion of many, the statements by the U.S. Embassy have been very ambiguous: Lisa Kubiske, the outgoing U.S. ambassador to Honduras, has on one hand highlighted the dire state of human rights in the country. But just two months ago, she made a public statement applauding the progress being made by the Honduran government on human rights.

We also ask that the special unit that was created to investigate LGBT crimes in the country –which was created with U.S. funding- be pressured to report on what it has been doing and to find out what the result has been in the 2.5 years since its creation. We want to know which cases are close to being solved and which require additional resources.

One last point is the issue of the militarization of Honduras. The country receives a large amount of financial aid, much of which is going to the police and the military; institutions which are documented to have links with organized crime. In addition to that, there are documented cases of the police and the military targeting campesinos and LGBT people specifically. If you take into account that the country does not manufacture any weapons, then you must ask yourselves how it is that American-made weapons are reaching the hands of members of organized crime. When you have corrupt police and military forces like we do, there is no one to protect the general public. That is why we ask the U.S. government that if there is any aid they continue to provide to the Honduran police and military, it has to be increasingly conditioned on human rights.

We hear about how sometimes there is a change of culture, where people are more openly LGBT or more willing to report a crime that was committed based on orientation or gender identity. Are more people taking about LGBT crimes or are there just more people being open about whom they are?

The other thing we cannot be too conclusive and say that this violence is exclusively rooted in homophobia because it is not just the LGBT community who are the victims of the violence in Honduras. As many of you know, Honduras now has the highest murder rate in the world with 25,000 murders having occurred in the last 5 years. This means that the population as a whole, not just LGBT people, are subject to a higher degree of violence. As a result of this violence, in Honduras we are beginning to see a surge in internal displacement; in the past five years alone 36,000 have been internally displaced in Honduras. Over the past five years, the number of gay men fleeing the country has increased dramatically. However, as I mentioned before, LGBT people are not the only ones being affected. As many of you have seen on the news, many children are leaving Honduras to come to the U.S.; when asked many have said that they are simply fleeing the violence in their home country.

Nelson: Of course; within the judicial system the treatment has been drastically different. You need not go any further than the case of Walter Tróchez, a well-known human rights LGBT activist who was murdered in 2009. Despite the fact that this is one of the most emblematic cases that this unit has been charged with investigating, nothing has been done to solve the murder. Surely that is a sign that LGBT cases are not being treated equally in the judicial system. The media also treats violence against LGBT people in a similar manner; very little is reported in the Honduran media regarding violence against the LGBT community vis-à-vis violence against other vulnerable groups.

Have you noticed any overlap in violence against LGBT people and political dissidents or activists?

Nelson: There is some conjecture due to the fact that a number of the murdered LGBT leaders were also known members of the opposition that arose after the military dictatorship.

Are there any groups which target LGBT people specifically or are the attacks on LGBT people committed by random individuals?

Nelson: The police, the army as institutions. There are cases that have an easy solution where there are witnesses to the crimes and enough evidence to convict the perpetrators, but many are unsolved.

In February 2013 there was international pressure to amend Article 321 of the country’s penal code so that it would also include discrimination on the basis of sexual orientation and gender as a crime. Six months later, Catholic Church and evangelical church leaders pressured the Honduran Congress to create a commission to look into dismantling this amendment.

Could you talk a little bit more about the murders of trans women?

Do you think it would be helpful to get more embassies interested in putting pressure on the Honduran government to do more to protect the LGBT community?

Nelson: Of course, the more people from people from the international community that are involved the better. However, the international community needs to be aware of one very important fact: some countries simply do not care about how they are perceived internationally in terms of human rights. This is the case with the current government of Honduras; it is common knowledge that the country cares very little about human rights. In fact, its track record has gone from bad to worse as the government continues to close down more and more human rights ministries, lets crimes go unresolved and limits freedom of speech. A law was recently passed which allows the government to withhold government secrets from the public and allows it curtail the freedom of the press and to spy on its own people. Due to the government’s reputation as a known human rights violator it is very important that we pressure the international community into opening an office of the UN High Commissioner on Human Rights in Honduras; they are the only ones who can and will protect the rights of the LGBT people and the Honduran people as a whole because the Honduran government is certainly not going to do it.