Notes from the Evidence Project: Guatemalan Government to Dismantle its “Archives of Peace”

In a surprise move, the Guatemalan government has announced the effective closing of the “Peace Archives,” one of the most active and important institutions created in the wake of the 1996 peace accords to promote peace, truth and reconciliation. According to Guatemalan press accounts, the Secretary of Peace Antonio Arenales Forno stated that by June 29 the government would “cancel [labor] contracts for which I see no justification and end the functions of an office that I find makes no sense.” 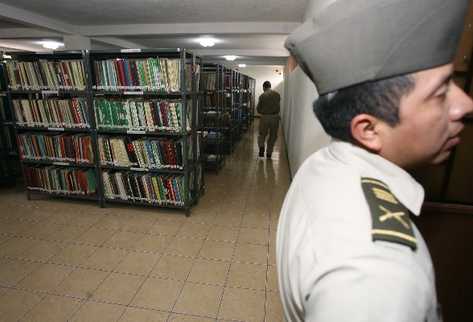 Peace Archives – courtesy of Prensa LibreThe dismantling of the Peace Archives is a blow against ongoing efforts in the country to recover historical memory and support judicial proceedings against human rights violators. Though the archives wasn’t founded until 2008 (under President Álvaro Colom), in the course of its brief life it managed to digitalize some two million government documents related to the internal armed conflict.

The Peace Archives also published nine important reports on issues such as forced disappearance, child trafficking, the notorious Presidential General Staff (Estado Mayor Presidencial—EMP), and the National Police archives. Its staff provided expert testimony for the Public Ministry in several key human rights cases, including the current indictment against ex-chief of state Efraín Ríos Montt for genocide, related to massacres carried out in the Ixil in 1982-83.

But Arenales Forno told reporters that these functions belonged elsewhere: digitalizing and analyzing military archives for human rights violations, for example, “corresponds to the human rights community, and criminal investigations correspond to the Public Prosecutor.” The Secretary of Peace said he was unsure what the government would do with the institution’s extensive digital archives, suggesting they may be transferred to the General Archives of Central America.

The closing of the Peace Archives ends an important source of support to human rights prosecutions in Guatemala, and may in part reflect the current government’s particular distaste for the genocide cases. Although President Otto Pérez Molina has not directly impeded any human rights investigation, he has been sharply opposed to the charge of genocide in trials of former Guatemalan army officers. His Secretary of Peace, Arenales Forno, has been equally outspoken, telling elPeriódico newspaper last February that “I am outraged that anyone would assert there was genocide in Guatemala.”

Pérez Molina’s decision also represents a reversion to the Guatemalan government’s longstanding practice to cede truth and reconciliation initiatives to non-governmental actors rather than providing its own leadership, relying on experts from local or international civil society groups in forensic anthropology, human rights, or archives, for example, to collect and analyze evidence of state violence. The Peace Archives was one of the few state institutions dedicated full-time to advancing society’s understanding of what happened during the bloody 36-year conflict.

The dismantling of the Peace Archives is a loss to human rights and justice initiatives around the world as well, given growing international interest in “archives of repression” such as Paraguay’s Archives of Terror, the Stasi files of former East Germany, and the Cambodia genocide archives, among others.

In an effort to dispel growing public anger about the decision, the President’s office issued a communiqué yesterday that challenges the characterization of its action as a “closing” of the archive. The statement asserts that the government only intends to “rescind contracts of personnel that no longer have functions to carry out within the Secretariat of Peace (Sepaz),” and that “the Archive of Peace will be redistributed among various government institutions, including the National Periodicals Library, the National Civil Police, the General Archives of Central America, and the Secretariat of Social Well-being of the Presidency, among others.” The communiqué states that the changes will be made in the context of a broad restructuring of government reparations programs, including the Secretariat of Peace.