Fifty-one years ago, the foundation for U.S. policy towards Cuba was made. On February 7th, 1962, the trade restrictions that we recognize today as the Cuban embargo were announced by President John F. Kennedy. President Bill Clinton later furthered the reach of the economic sanctions by signing the Cuban Democracy Act (Torricelli Act) of 1992 and the Cuban Liberty and Solidarity Act (Helms-Burton Act) of 1996 into law.

If the Obama Administration wants to see progress in our relationship with Cuba over the next four years, as the President said in a Telemundo interview last week, he 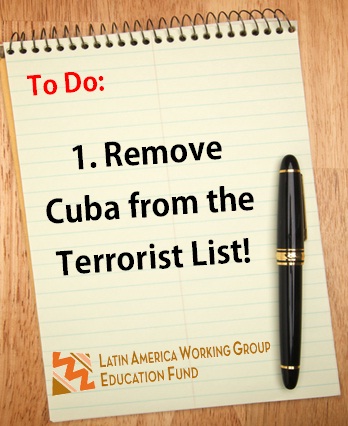 There is still much more that the President could do without congressional approval. We want to focus on one important action that would open the door to other advances. Through his executive authority, the President has the power to remove Cuba from the State Department’s list of State Sponsors of Terrorism. On March 1st, 1982, Cuba was added to this list because “at the time, numerous U.S. government reports and statements under the Reagan Administration alleged Cuba’s ties to international terrorism and its support for terrorist groups in Latin America,” says a 2005 Congressional Research Services report. If you visit the State Department’s website, the few paragraphs that detail Cuba’s designation on the list actually read like reasons to now remove Cuba from the list. Now is the time for the United States to show its sincerity in pursuing a path toward improved relations with Cuba. It’s long overdue that we join the rest of the world in recognizing that Cuba is not a threat, rather a potential partner in the western hemisphere. And if not a partner, then at least not an adversary. Taking Cuba off this progress-stifling list would also send a “Johnny come lately” signal to our Latin American neighbors, who are challenging the United States on Cuba policy, both publically and privately. If the United States wants to improve relationships with Western Hemisphere countries in one big move, this is the way to do it.

Cuba says it is ready and willing to move in that direction. Are we? You can help make this a priority for the President. Here’s how:

Tell President Obama to take Cuba off of the Terrorist List by signing the petition today!