Oct 29th the UN will Condemn the Embargo on Cuba, What Will YOU Do? 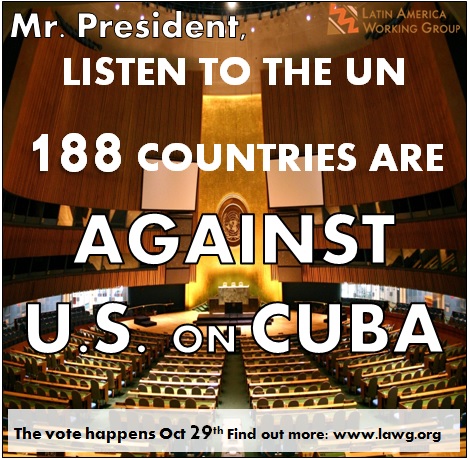 Tell the President today that the U.S. needs to join the 188 countries of the world that want to end the U.S. embargo on Cuba!

The U.S. economic embargo on Cuba has been a topic at the United Nations General Assembly meeting for the past twenty-one years. Every year an overwhelming majority of nations vote to condemn the U.S. embargo policy. Last year, 188 countries voted against us with three countries in favor of maintaining the embargo. Those countries? The United States of course, Israel and Palau (a tiny island in the Pacific). The numbers say it all; the rest of the world is against us, the United States, for our out-dated policy towards Cuba. This year won’t be any different, except that we want to make a big deal about it so that the media can’t ignore it again. This October 29th, for the twenty-second year in a row, the Cuban government will ask the United Nations to condemn the basis of our current policy towards Cuba, the U.S. economic embargo.

Today is United Nations Day, and we want to recognize the important role that the UN has taken to promote peace, development and human rights throughout the world, everything that the U.S. embargo on Cuba goes against. As UN Secretary General Ban Ki-Moon said, “In a world that is more connected, we must be more united. On United Nations Day, let us pledge to live up to our founding ideals and work together.” Together and with persistence we can change our Cuba policy.

Let’s flood the White House Comment Line and Switchboard today with messages; make your call now. Get the phone numbers and call scripts for your messages here.

While President Obama has taken small steps to improve relations, such as liberalizing travel regulations and resuming direct talks with the Cuban government over direct mail and migration issues, there is still much that the administration can do by executive authority. One of the first steps that we can take to re-direct the President’s attention to Cuba policy would be to let him know that the majority of the U.S. population stands with the 188 countries of the United Nations that condemn the embargo yearly, and which unfortunately doesn’t include our own UN representative.

The Cuban government calculates that on an annual basis the embargo costs Cuba about $685 million. The U.S. Chamber of Commerce, that supports the end of the embargo, claims that the embargo costs the United States more than Cuba, at a whopping loss of $1.2 billion per year. As it is, our Cuba policy is not only costing us more money, but also negatively affecting our standing in the international community, a community that clearly disagrees with our obsolete and failed policy.