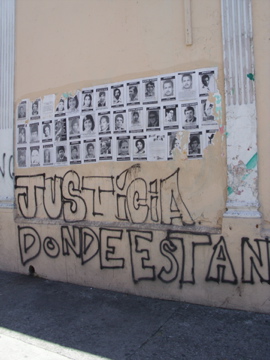 Graffiti in Guatemala asks for justice and answers about the disappeared.Someone who should have known better recently said to me, “Why does it matter so much that the Guatemalan military declassify files? Human rights groups will never be satisfied. Shouldn’t we focus on something else?”

In 2008, Guatemalan President Álvaro Colom promised to set up a commission to declassify top-secret military documents on the war. Two hundred thousand people, most of Mayan descent, died during Guatemala’s brutal internal armed conflict.  According to the United Nations-led Truth Commission, the Guatemalan military or groups associated with them were responsible for 93 percent of human rights violations during the conflict—abuses that the Commission determined constituted “acts of genocide.”

Fifteen years after the war, justice is still out of grasp and much remains secret. Guatemalan police archives, which were discovered accidentally in 2005, have proven to be a treasure trove of information about the methodical bureaucracy of repression and killing. The new military archive could be a crucial part of advancing justice for cases from the war. However, when the archive opened last year, human rights groups found that it revealed far less than it should. Located on a military base, it is not welcoming to the human rights groups and victims who will make greatest use of its documents. And what’s more, many documents that should be there, such as operational military plans, are not included.

I recently saw a film called The Mexican Suitcase about a suitcase filled with 4,000 photo negatives from the Spanish Civil War that surfaced in Mexico in 2007.

The Franco regime bottled up the past, jailed the past. People were not allowed to even mourn their dead. There were no monuments to those who fought and died for a more just Spain.

But Franco could not bottle up the genie of the brutal past forever. The grandchildren of those who had fought and died or gone into exile have now come forward. They are exhuming the bones, they are creating new histories, they are telling the tales of their brave grandparents.

As one woman now living in exile in Mexico, her face deeply lined, said, “My memories are so strong—people say forget it. But I will not forget.”

Similarly, thousands of people in Guatemala will never forget what happened to their loved ones and will not stop searching for answers until they have found justice. Last week’s historic opening of a trial of former dictator Efrain Rios Montt for genocide and crimes against humanity was an important step. Yet, much information is still concealed that would allow some of the emblematic genocide cases to move forward.

The U.S. government should press the Guatemalan military to fulfill its promise to fully declassify documents and make the archive completely accessible to the public. A just society can only be built on a foundation of truth.

As the Spanish exile in the film put it, “You cannot forget the past, and you should not want to.”

The suitcase will not stay shut forever. You might as well open it now.