The recently-released 2014 Florida International University (FIU) Cuba Poll shows major changes in the attitudes of the Cuban-American population in Miami-Dade County, Florida on issues surrounding U.S. policy toward Cuba. Researchers at FIU have been polling this community for over 20 years, beginning in 1991. This year, the findings prove that the loudest voices in the Cuban-American community do not necessarily reflect the views of the entire community and that a majority of the community would be open to a change in U.S. policy.

This year’s poll was conducted between February and May of 2014. 1,000 residents of the Miami-Dade community over age 18 were polled. Responders were given the option of taking the poll in English or Spanish. Results of each question asked were recorded in total, then broken down and analyzed by participants’ age range, and year they left Cuba.

When asked about the embargo, 71 percent of Cuban-Americans surveyed agreed that the U.S. embargo has “not worked at all” or “not worked very well.” 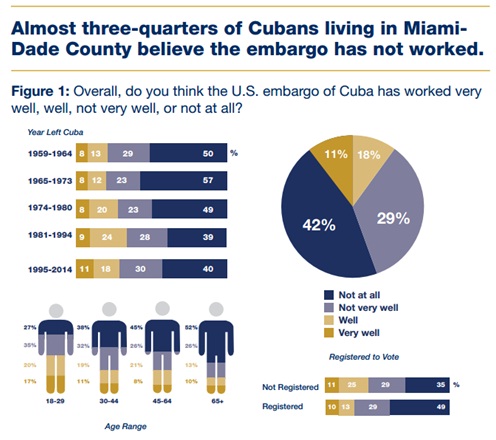 An overwhelming majority of those polled- 69 percent – agreed that travel restrictions should be lifted allowing all U.S. citizens to travel to Cuba. 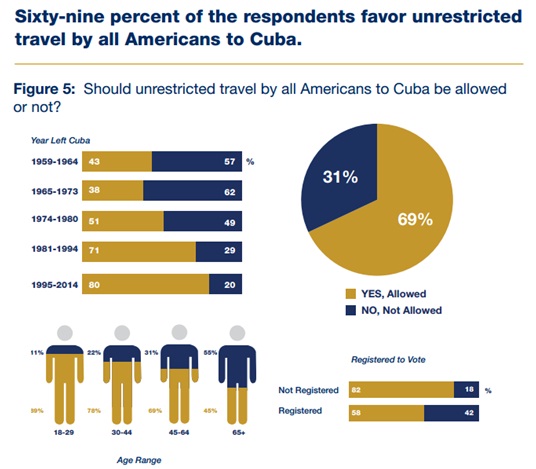 An incredible 71 percent of those polled favor the continuation of people-to-people travel opportunities. 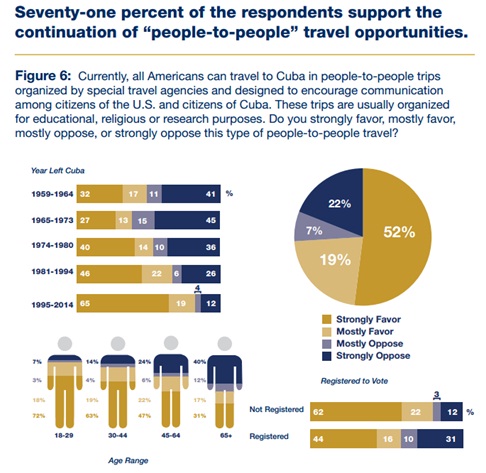 When asked if they supported or opposed the United States re-establishing diplomatic relations with Cuba, 68 percent of those polled support relations. Among the youngest age range polled (18-22 yrs), 88 percent support a change in policy to re-establish relations. 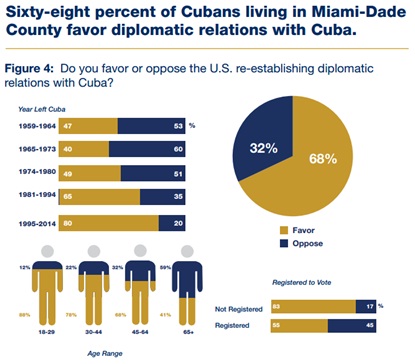 The FIU Cuba poll has been used throughout the past two decades as a resource for politicians, scholars, and policy makers. Findings of the poll have changed over the years, reflecting changing dynamics within the Cuban-American population. The most significant trends overtime have been the decline of support for continuing the embargo, which has fallen from 87 percent of those polled supporting continuation in 1991, to 48 percent of those polled supporting continuation in 2014. 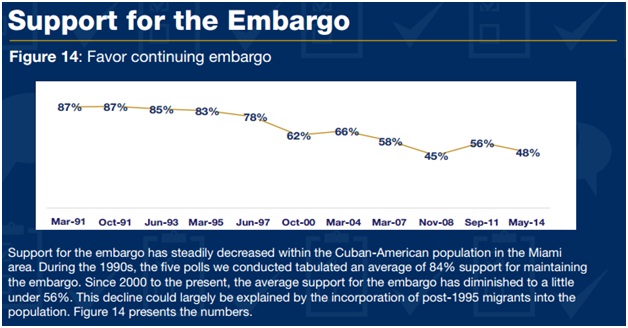 The poll results can most likely be explained by the changing dynamics in the population of the Cuban-American community in the Miami area. Guillermo Grenier, an FIU professor who has been conducting the poll since 1991, stated, “The engine driving change is demographics, we are moving into a period of re-Cubanization of Miami.”As the older generation of Cuban-Americans is replaced by a younger generation, the community stance on many issues is evolving to become more moderate and favorable to change in U.S. policy. Over 20,000 new migrants come to the United States from Cuba every year, so this trend does not show signs of weakening. The newer generation of Cuban-Americans has been able to keep contact with family still in Cuba, and unfavorable U.S. policies will negatively affect newer arrivals to the United States from visiting family in Cuba or sending remittances back to the island.

With the backing of a majority of the Cuban-American community, the time is certainly right to change U.S. policy toward Cuba.