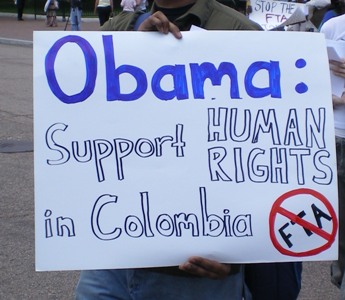 The Latin America Working Group (LAWG), Washington Office on Latin America (WOLA), U.S. Office on Colombia (USOC), Center for International Policy (CIP), and the U.S. Labor Education in the Americas Project (USLEAP) urge President Obama to refrain from declaring that key elements of the Labor Action Plan (LAP) linked to the Free Trade Agreement have been effectively implemented at this week’s Summit of the Americas in Cartagena, Colombia or in his subsequent meeting with Colombian President Juan Manuel Santos. The labor and human rights situation in Colombia has not improved sufficiently to implement the Free Trade Agreement.

On April 7, 2011, the U.S. and Colombian governments announced the signing of the U.S.-Colombia Labor Action Plan (LAP). In it, both governments expressed their commitment to provide a level playing field of economic opportunities for U.S. sectors as well as guarantees that Colombian workers would “have acceptable working conditions and respect for fundamental labor rights.” The Colombian government confirmed its obligation to protect internationally recognized labor rights, prevent violence against labor leaders, and prosecute the perpetrators of such violence. The LAP spells out critical changes needed to protect trade unionists, guard against labor rights abuses, eliminate the abusive associative labor cooperative (CTA) model, and advance prosecutions of perpetrators of anti-labor violence. The U.S. government announced that it was committed to reforming the security environment for all Colombians, addressing the needs of victims, and enhancing rule of law. Implementation of the key elements of the LAP is a precondition for the U.S.-Colombia Free Trade Agreement to enter into effect.

It is premature for the United States to declare sufficient progress under the terms of the LAP. In doing so, the U.S. government would lose a tremendous political opportunity to significantly improve labor rights in Colombia. While a number of laws and regulations have been issued, key elements of the LAP remain unfulfilled as evidenced in Colombia’s failure to fully ban problematic associative labor cooperatives and other forms of labor intermediation that bust unions. Furthermore, in priority sectors of the LAP including sugar and ports, businesses are turning to CTA-like models with different names to employ workers and deny them their rights. The Colombian government is not acting effectively to prevent this, as conditioned by the LAP. It remains a common practice to fire workers who wish to affiliate with trade unions and then to stigmatize these workers so that they cannot find employment elsewhere, driving them into poverty.

Union activists remain in grave danger in Colombia. Thirty trade unionists were murdered in 2011, and 4 unionists were killed so far in 2012. The security situation for human rights defenders significantly deteriorated in 2011 with attacks increasing by 36% compared to 2010. Of the 49 human rights defenders killed in 2010, 19 were indigenous leaders. Colombia needs to enforce the rule of law in order to send the signal to perpetrators that it will not tolerate further attacks against trade unionists, human rights, and community activists or other human rights violations.

Instead of making progress, Colombian government is taking steps backwards on human rights crimes. Military justice legislation under consideration by the Colombian Congress could lead to the prosecution of many kinds of human rights crimes committed by the military to return to military courts, thus rolling back historic advances in Colombian justice. The “legal framework for peace” bill would allow the judiciary to suspend existing sentences for any crimes committed by actors in the armed conflict. Not only do such provisions constitute a major boost towards guaranteeing impunity for human rights abuses, they also constitute a breach of the human rights conditions tied to U.S. military assistance towards Colombia.

While the Santos administration has improved its public rhetoric regarding human rights, the steps it has taken have failed to adequately improve protections for human rights defenders. President Santos’ flagship victims and land restitution law, an initiative we support in essence, is severely lacking in protection for victims. Even before the law has been fully applied, 26 land rights activists were killed during the Santos administration. Furthermore, new victims continue to be created in Colombia due to ongoing forced displacement linked to the conflict and abuses committed by the armed groups. For effective protection of communities, land rights activists, trade unionists, and human rights defenders to take place, the U.S. must express its grave concern for the expansion of paramilitary groups and encourage bold efforts to dismantle their operations. The Colombian government also needs to develop a well-financed and coordinated civilian agency plan to protect land rights activists and communities through careful consultation with affected parties.

Rather than making premature judgments about progress in labor and human rights—judgments that are not supported by facts—the United States should use the opportunity of the meeting in Cartagena to encourage its ally to make further reforms. Finally, the U.S. government should respond to a historic opportunity presented by the release of hostages—and the announcement by the FARC guerrillas that they are abandoning kidnapping for profit—to encourage a negotiated solution to the protracted conflict that has undermined security and human rights in Colombia for many decades.