Prosperity and Security for Whom? Advocating for Rights-Based Policies Toward Central America under a Trump Administration

This article was originally published as a guest post in The Rochester Committee on Latin America’s (ROCLA) Update on the Americas, summer 2017.

Additionally, Daniella Burgi-Palomino, LAWG’s Senior Associate for Mexico, Border and Migration Issues, will participate in a discussion hosted by ROCLA and entitiled “Human Rights in Mexico, Immigration and Two Borders.” The event will take place on November 1 at 7 pm at Downtown United Presbyterian Church, 121 North Fitzhugh Street, Rochester, New York. All are welcome to attend.

ROCLA is privileged to print an original article written by two staff-members of the Latin American Working Group (LAWG) in Washington, D.C. Daniella Burgi-Palomino serves as Senior Associate for Mexico, Border and Migration Issues, coordinating LAWG’s campaign to promote justice for Mexico and the borderlands. Lily Folkerts also works on Border and Migration Issues and serves as LAWG’s Fundraising Coordinator. LAWG co-hosted a civil society briefing, at which Ms. Burgi-Palomino spoke, in parallel to the recent Conference on Prosperity and Security in Central America, in Miami, FL. The authors discuss the Conference and U.S. Policy on Mexico and the Central American Northern Triangle countries below. [Ed.] 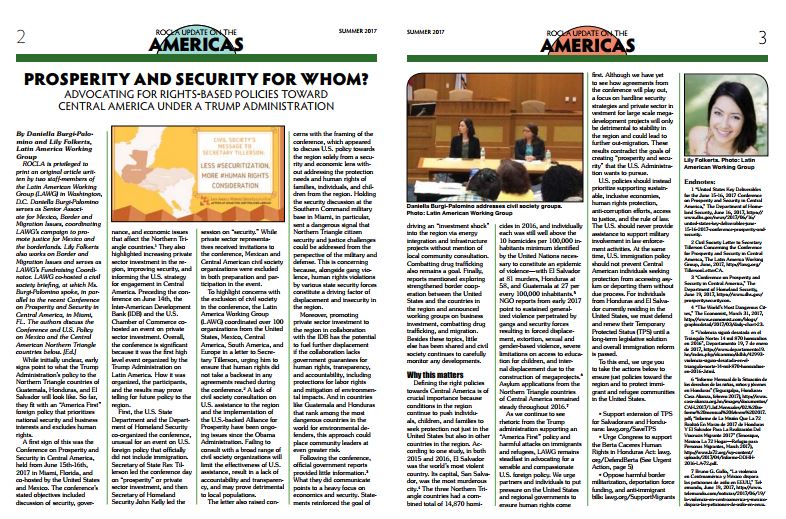 While initially unclear, early signs point to what the Trump Administration’s policy to the Northern Triangle countries of Guatemala, Honduras, and El Salvador will look like. So far, they fit with an “America First” foreign policy that prioritizes national security and business interests and excludes human rights.

A first sign of this was the Conference on Prosperity and Security in Central America, held from June 15th-16th, 2017 in Miami, Florida, and co-hosted by the United States and Mexico. The conference’s stated objectives included discussion of security, governance, and economic issues that affect the Northern Triangle countries.1 They also highlighted increasing private sector investment in the region, improving security, and informing the U.S. strategy for engagement in Central America. Preceding the conference on June 14th, the Inter-American Development Bank (IDB) and the U.S. Chamber of Commerce cohosted an event on private sector investment. Overall, the conference is significant because it was the first high level event organized by the Trump Administration on Latin America. How it was organized, the participants, and the results may prove telling for future policy to the region.
First, the U.S. State Department and the Department of Homeland Security co-organized the conference, unusual for an event on U.S. foreign policy that officially did not include immigration. Secretary of State Rex Tillerson led the conference day on “prosperity” or private sector investment, and then Secretary of Homeland Security John Kelly led the session on “security.” While private sector representatives received invitations to the conference, Mexican and Central American civil society organizations were excluded in both preparation and participation in the event.

To highlight concerns with the exclusion of civil society in the conference, the Latin America Working Group (LAWG) coordinated over 100 organizations from the United States, Mexico, Central America, South America, and Europe in a letter to Secretary Tillerson, urging him to ensure that human rights did not take a backseat in any agreements reached during the conference.2 A lack of civil society consultation on U.S. assistance to the region and the implementation of the U.S.-backed Alliance for Prosperity have been ongoing issues since the Obama Administration. Failing to consult with a broad range of civil society organizations will limit the effectiveness of U.S. assistance, result in a lack of accountability and transparency, and may prove detrimental to local populations.

The letter also raised concerns with the framing of the conference, which appeared to discuss U.S. policy towards the region solely from a security and economic lens without addressing the protection needs and human rights of families, individuals, and children from the region. Holding the security discussion at the Southern Command military base in Miami, in particular, sent a dangerous signal that Northern Triangle citizen security and justice challenges could be addressed from the perspective of the military and defense. This is concerning because, alongside gang violence, human rights violations by various state security forces constitute a driving factor of displacement and insecurity in the region.

Moreover, promoting private sector investment to the region in collaboration with the IDB has the potential to fuel further displacement if the collaboration lacks government guarantees for human rights, transparency, and accountability, including protections for labor rights and mitigation of environmental impacts. And in countries like Guatemala and Honduras that rank among the most dangerous countries in the world for environmental defenders, this approach could place community leaders at even greater risk.

Following the conference, official government reports provided little information.3 What they did communicate points to a heavy focus on economics and security. Statements reinforced the goal of driving an “investment shock” into the region via energy integration and infrastructure projects without mention of local community consultation. Combatting drug trafficking also remains a goal. Finally, reports mentioned exploring strengthened border cooperation between the United States and the countries in the region and announced working groups on business investment, combatting drug trafficking, and migration. Besides these topics, little else has been shared and civil society continues to carefully monitor any developments.

Why this matters:
Defining the right policies towards Central America is of crucial importance becauseconditions in the region continue to push individuals, children, and families to seek protection not just in the United States but also in other countries in the region. According to one study, in both 2015 and 2016, El Salvador was the world’s most violent country. Its capital, San Salvador, was the most murderous city.4 The three Northern Triangle countries had a combined total of 14,870 homicides in 2016, and individually each was still well above the 10 homicides per 100,000 inhabitants minimum identified by the United Nations necessary to constitute an epidemic of violence—with El Salvador at 81 murders, Honduras at 58, and Guatemala at 27 per every 100,000 inhabitants.5 NGO reports from early 2017 point to sustained generalized violence perpetrated by gangs and security forces resulting in forced displacement, extortion, sexual and gender-based violence, severe limitations on access to education for children, and internal displacement due to the construction of megaprojects.6 Asylum applications from the Northern Triangle countries of Central America remained steady throughout 2016.7

As we continue to see rhetoric from the Trump administration supporting an “America First” policy and harmful attacks on immigrants and refugees, LAWG remains steadfast in advocating for a sensible and compassionate U.S. foreign policy. We urge partners and individuals to put pressure on the United States and regional governments to ensure human rights come first. Although we have yet to see how agreements from the conference will play out, a focus on hardline security strategies and private sector investment for large scale megadevelopment projects will only be detrimental to stability in the region and could lead to further out-migration. These results contradict the goals of creating “prosperity and security”
that the U.S. Administration wants to pursue.

U.S. policies should instead prioritize supporting sustainable, inclusive economies, human rights protection, anti-corruption efforts, access to justice, and the rule of law. The U.S. should never provide assistance to support military involvement in law enforcement activities. At the same time, U.S. immigration policy should not prevent Central American individuals seeking protection from accessing asylum or deporting them without due process. For individuals from Honduras and El Salvador currently residing in the United States, we must defend and renew their Temporary Protected Status (TPS) until a long-term legislative solution and overall immigration reform is passed.

To this end, we urge you to take the actions below to ensure just policies toward the region and to protect immigrant and refugee communities in the United States.
• Support extension of TPS for Salvadorans and Hondurans: lawg.org/SaveTPS
• Urge Congress to support the Berta Caceres Human Rights in Honduras Act: lawg.org/DefendBerta (See Urgent Action, page 5)
• Oppose harmful border militarization, deportation force funding, and anti-immigrant bills: lawg.org/SupportMigrants