A lot has happened since the beginning of the year. Unfortunately, not a lot of it is good. On top of the Trump Administration’s ongoing harsh policies turning away asylum seekers at the U.S.-Mexico border, it has now weaponized the COVID-19 public health crisis to close the border to asylum seekers and expel vulnerable individuals, families, and children to Mexico or deport them to their home countries. Here is a recap of what has happened with the policies at the border, what this latest asylum ban means for asylum seekers and migrants, and how we’re pushing back with you.

Before COVID-19: Ongoing anti-asylum policies at our border 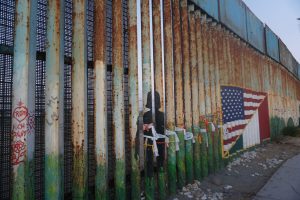 This January 2020 marked the one-year anniversary of the Migrant Persecution Protocols (MPP) or “Remain in Mexico” policy. We co-led a Week of Action to highlight the negative impacts of this policy–over 60,000 families, men, women, and children, forced to wait in danger in Mexico and 1,001 publicly reported cases of murder, rape, torture, and kidnapping that asylum seekers suffered.

Thanks to our efforts over the last year, Congress is listening. The Congressional Hispanic Caucus led a delegation to the southern border to experience firsthand the horrors of Remain in Mexico. This trip, along with our advocacy, inspired Representative Joaquin Castro (D-TX) and 110 members of Congress to send a letter to Acting Secretary of DHS, Chad Wolf calling for the termination of this illegal policy. We also mobilized support for “The Asylum Seeker Protection Act” (H.R. 2662) sponsored by Representative Veronica Escobar (D-TX)  to defund MPP, and worked with you to make sure it got 67 co-sponsors. Now because of the pandemic, the administration has postponed MPP hearings for asylum seekers waiting in Mexico until May 1st, leaving them in limbo until the policy restarts. We must continue to advocate for these migrants left in danger, without resources, and end this policy for good.

The Trump Administration has also been using metering and the Asylum Cooperation Agreements (ACAs) to slam the door to asylum seekers. There are currently 14,400 asylum seekers on illegal waitlists in addition to those stranded due to Remain in Mexico. Shelters have had to shut down to protect asylum seekers and staff inside from the virus, leaving migrants with nowhere to turn. Meanwhile we’ve also been coordinating with our allies to monitor the ACAs or “safe third country” agreements that were signed with Guatemala, Honduras, and El Salvador, shipping migrants to apply for asylum in these countries instead of in the United States.

Before the pandemic, one of these three ACAs was being implemented and under it, over 1,000 men, women, and children had been returned to Guatemala. The Guatemala ACA has temporarily been halted though it’s unclear for how long and it’s still uncertain when and if the ACAs will begin in Honduras and El Salvador. We will continue educating members of Congress on the illegality of these agreements and calling for an end to their implementation.

Remain in Mexico and the ACAs were already sham processes that failed to provide asylum seekers with any sort of meaningful chance at receiving protection from the United States and that returned them to danger. But on March 20th, 2020, the Trump Administration went a step further and used the coronavirus global pandemic to implement a total asylum ban and border shutdown. Under a new Centers for Disease Control and Prevention (CDC) order, the administration used the public health emergency to justify barring all “non-essential” traffic at the U.S.-Mexico border–which basically means all migrants.

We’ve now learned that Customs and Border Protection (CBP) has been expelling all migrants at the border in an average of 96 minutes without any sort of screening for protection concerns, and just dumping individuals, families, and children in Mexico or placing them directly on planes to be deported to their home countries. This violates U.S. and international law. It is illegal to expel unaccompanied children under the U.S. Trafficking Victims Protection Reauthorization Act (TVRPA) and even during a global pandemic, states can’t just totally block entry to asylum seekers and refugees without evidence of a health risk according to the United Nations. So far, over 6,000 migrants have already been expelled under this new order either to Mexico or to their home countries, including close to 400 children. We spoke out about this outrageous order and joined letters to DHS to denounce it. Together, we must continue calling on the Trump Administration to rescind the total asylum ban, screen and process all asylum seekers and allow them to enter and stay with their families or organizations, instead of waiting in Mexico. Let’s also make sure our members of Congress are raising these demands in letters to the administration and public statements..

Deportations during a pandemic: exporting COVID-19

As if that wasn’t enough, the Trump Administration has also been forcibly flying adults and unaccompanied children back to their home countries at a time when travel is restricted worldwide. This is inhumane and dangerous because migrants do not receive any sort of access to medical care within Immigration and Customs Enforcement (ICE) detention facilities, where they could have already been exposed to the virus, or before boarding the deportation flights. In fact, ICE has only been taking migrants’ temperatures before deporting them, which is a wholly insufficient way of testing for COVID-19. And then upon arriving in countries like Guatemala, Honduras, and El Salvador, migrants face inadequate quarantine measures and fragile healthcare systems, deepening poverty, severe food insecurity, repressive policing of public health measures, and restrictions on public transportation, impacting the ability of families from meeting their relatives upon arrival, as well the ability to move to their communities before curfew.  There are also ongoing deportations to Haiti which is desperately unprepared to handle another catastrophe. This is a deeply unsafe situation especially for children who are deported back.

And the U.S. government is exporting the virus.  There have already been dozens of Guatemalan migrants deported from the United States who tested positive for COVID-19, and the Guatemalan president recently announced a suspension of flights because of concerns that deportations from the United States were spreading the virus. Several migrants deported to Haiti have tested positive upon arriving in the country but deportations are continuing which is outrageous.

You’ve raised your voices in a petition LAWG launched to halt deportations to the region. We’ve led seventy of our partners in an organizational statement calling on the administration to halt the deportations of men, women, and children immediately and we are putting up a united front by joining statements with other organizations to call for a stop to all of these deportations across the region including to Haiti.

But our work together is not over. President Trump is also pressuring countries to accept deported migrants by threatening visa sanctions. We must continue to call on the administration to immediately halt deportations during the pandemic and make sure our members of Congress are also calling for a halt to immigration enforcement and releasing immigrants from detention. Doing otherwise would mean our country is sending migrants to unstable situations and exporting the virus to countries that are not prepared to respond.

The reality is that there’s a lot of uncertainty for all of us and for our communities. But now is not the time for fear mongering. This is a public health crisis that requires public health responses, not the extreme anti-asylum policies and deportations we’re seeing at the border. We must speak out against the harsh measures that the administration has implemented during the pandemic.