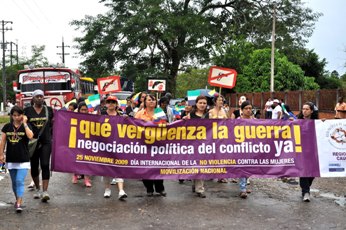 Last year’s historic march in honor of the women victims of violence in Putumayo.
“The women marched, they yelled slogans, they painted footsteps on the sidewalks and roads, they organized theater performances that demonstrated the pain of searching for disappeared family members. This protest was for all the mothers and women victims who became, because of the violence, political leaders, moved by love for their children, this love that forced them to search, to insist on knowing the truth of what happened to them, to demand justice, to demand rights, as a form of transforming pain into strength, and resistance to adversity.”

Happy International Women’s Day from all of us at LAWG! In honor of this holiday, we are publishing the second half of an interview about the Putumayo Women’s Alliance, a network of women’s organizations and activists working together for peace and justice in the middle of a conflict zone. To read the first half of the interview, click here.

Tell me more about the first project of the Putumayo Women’s Alliance.

The project was designed through workshops to analyze women’s reality, but also to teach them about laws, and rights. We also conducted open-ended interviews, and conversations, and more than 1,200 surveys that we administered to women during the workshops. We could demonstrate, despite the silences, the dramatic levels of generalized violence suffered by women. Violence from armed groups, and from family members, intensified by the drug economy in the region—drug trafficking and coca cultivation—and a strong patriarchal culture.

We also observed how women responded to this violence. The strategies used to empower women. The results of this research are used to increase the visibility of women’s situations, to pressure the state and the local government to act. It is also useful as a pedagogical strategy for the social and political empowerment of women.

What challenges did you face?

Although it seems incredible, one of the biggest problems in getting women to come to the workshops was getting permission from their husbands or partners. Local teachers were critical for inviting women to participate, because they were able to pressure the husbands and ensure they allowed their wives to attend.

Another difficulty was women bringing their children to the workshops, because many women have many children. We had to hire a teacher to conduct a parallel children’s workshop.

There is still a lot of violence, but the women resist. There is one leader who says, “If we stayed quiet they killed us, and if we spoke they killed us. Well, they can kill us for speaking, but here we are still fighting.”

Working together, bringing attention to this situation is a protection strategy for the women. We have a network of women that is built through the workshops, sharing experiences. Peasant women from one region meet the women fighting against the oil companies, or the indigenous women learn about the struggles of the women’s organizations. This enriches and empowers the women.

Tell me about the recent protests organized by the Alliance.

We use this project to mobilize protests, marches and symbolic acts that denounce violence but also reclaim rights. In practice, these are human rights training workshops, where women can critically analyze their reality, where the women can identify the kinds of violence they suffer. This is important because for women who have experienced such violence for so long, violence is naturalized. These projects become an exercise in building self-esteem, self-worth, and of course in women’s rights.  At the same time, we carry out work, planning, reflecting and developing strategies to change the discrimination and violence.

This past year we gathered one hundred seventy names and engraved them on a wall of truth, in the largest park in the capital city.

Finally, the Alliance promotes mobilization, and symbolic acts, as a strategy to increase the profile of women in the region, and as a means to demonstrate women’s force through unity, so their needs and priorities are heard, and their rights are recognized. 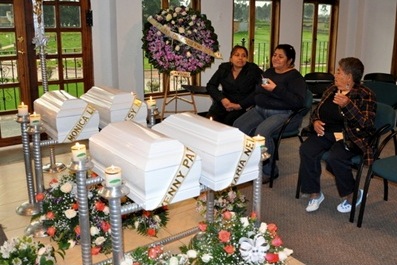 Blanca Nieves, mother of the Galarraga sisters, mourns her murdered children.Last year, the Alliance organized a historic protest, with more than three thousand women from four departments in southern Colombia united, and traveled to Putumayo, in honor of the Galarraga sisters. Four young girls, two of them twins, who were tortured, raped, dismembered alive and then disappeared paramilitaries in La Dorada, a small town on the Ecuadoran border. Why did the paramilitaries do this to them? They accused one of the girls of having a relationship with a guerrilla. Only after their mother and sister’s tireless searching, for more than ten years, were their bodies finally found, exhumed by state officials and returned to their family.

Women, outraged, came together and organized this protest and symbolic acts to honor these girls, and in honor of various leaders who suffered the same fate in different sites throughout Putumayo. The women marched, they yelled slogans, they painted footsteps on the sidewalks and roads, they organized theater performances that demonstrated the pain of searching for disappeared family members. In a final tribute to woman who had been assassinated, who had been disappeared, women cried out their names, and recovered their dignity.

This protest was also a special recognition for all the mothers and women victims who became, because of the violence, political leaders, moved by love for their children, this love that forced them to search, to insist on knowing the truth of what happened to them, to demand justice, to demand rights, as a form of transforming pain into strength, and resistance to adversity.

What are some of the Alliance’s future plans?

We are working on a project with a Colombian university, a certificate in gender and social development, women’s rights and an emphasis on projects and development, so that the women learn about rights but also have a chance to improve their daily life, their survival in this difficult context.