Raising Our Voices for Immigrant Families 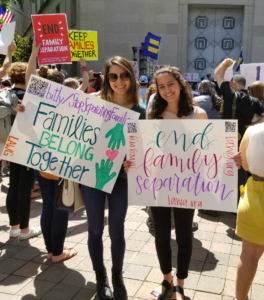 Lily and former LAWG intern Anna at rally against family separation at the Department of Justice. Photo by Lily Folkerts.

Let’s be honest. It’s been a tough year. From relentless attacks on families, unaccompanied children, and individuals arriving at our southern border to long-standing members of our communities like TPS beneficiaries and Dreamers. Trump officials in the Department of Homeland Security (DHS) and the Department of Justice (DOJ) have pushed policy change after policy change, all of which have had and will continue to have devastating effects on immigrant families and those arriving at our border.

Together, we’ve fiercely opposed these measures and highlighted their negative impacts on migrants and refugees from Mexico and Central America. We’re so thankful to have had your support in this fight, but we still have a lot of work to do. Here are a few of the ways we’ve worked together to raise our voices against these policies and ways you can act to resist what’s next on this administration’s heartless agenda.

This past March, the administration ended Temporary Protected Status (TPS) for around 57,000 Hondurans. This was the latest in a string of decisions, which phased out protections for Nicaraguans, Salvadorans, and Haitians. The result—from 2019 to 2020 around 300,000 TPS beneficiaries’ protections will expire, upending their lives and prohibiting them from living and working in the communities they have called home for years, for some, decades. And officials made this senseless decision despite numerous congressional letters, some bipartisan, that we organized and rallied behind together. Now, we’ve kept busy knocking on the doors of Congress, asking them to support bills that would provide long-term protection for TPS beneficiaries, like a pathway to citizenship. Despite our efforts so far, no bills have advanced in the House or Senate. What’s more, our Dreamer brothers and sisters face the same fate. No clean Dream Act, one that wouldn’t trade the lives of Dreamers and use them as bargaining chips for increased border militarization, has passed yet.

Thanks to multiple lawsuits, some hope has come in the form of federal district courts standing up to the Trump Administration’s termination of protections for Dreamers and TPS beneficiaries. Dreamers, for example, can still apply to renew their status. And recently, a California judge halted termination of TPS for Nicaraguans, Salvadorans, and Haitians, stating that the decision was unconstitutional and politically motivated. Now, lawyers are working to have Hondurans covered by this preliminary injunction. And, we remain hopeful that other lawsuits, many of which include Honduras, will also yield favorable outcomes.

But while positive, these court rulings for Dreamers and TPS beneficiaries are only temporary blocks on the administration’s plans, ones that they are likely to appeal until they end up on the docket of the Supreme Court. We must continue to push for longer-term, permanent protections for these members of our communities.

One of the more difficult moments that we faced this summer was the administration’s egregious “zero tolerance” family separation policy. We are proud to have organized in opposition with you—all 130,000 of you who signed our petition and all the activists and members of Congress that rallied with us in D.C. over the summer. Thanks to our joint efforts, we forced the administration to backtrack on this heartless initiative. These realities still haven’t ended though, as hundreds of children remain separated from their families and recent findings show that many more were separated than the roughly 2,600 that was initially reported. We must continue holding DHS accountable for these actions and call on the administration to reunify every family immediately.

But now, they have already moved on to their next cruel plan to attack migrant children and families. The administration is working to overturn a long-standing court decision, known as the Flores Settlement Agreement, which defines minimum protections for migrant children, including access to basic human rights and a limit of 20 days in detention. And news is spreading that, until the administration successfully does away with Flores, they will force parents to make an unconscionable choice—keep your children detained with you indefinitely or consent to be deported back without your child. Immigration and Customs Enforcement (ICE) is also going after some of the undocumented family members who could receive these unaccompanied children in the United States, arresting and deporting them.

The administration wants to make sure no one feels safe. We’re here to tell them they’re wrong. That’s why, together, we joined forces and submitted public comments against changes to the Flores Settlement Agreement. And we’ll continue to push for community-based alternatives to detention, which are far more humane and cost-effective. 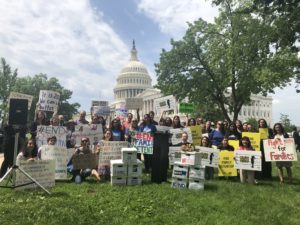 LAWG staff and members of partner organizations at a rally to deliver
petitions against family separation to Congress. Photo by Amnesty International.

Administration officials are attacking on all fronts. Alongside TPS and DACA terminations and locking up children, Attorney General Jeff Sessions is set on restricting access to asylum for families and children arriving at our borders and in urgent need of protection.

The Attorney General has the power to cherry pick cases to review. But the ones he’s chosen are telling. Most recently, his review of a case of a Salvadoran woman who for years suffered violence from her husband wiped out legal precedent and decided that victims of domestic and gang violence are no longer eligible for asylum. We know this decision will likely inhibit the ability of Central American women and individuals from passing their first test to receiving asylum at the border, chances that were already slim without any legal support. So, with your help, we mobilized over 100 members of Congress to denounce the attorney general’s decision and demand he reverses it. But we know we are only going to start seeing more of the impacts of this decision in the future. And since individuals will keep seeking protection from gangs and other kinds of violence in Central America, we must do more to encourage our members of Congress to speak out and denounce these policies.

Besides wreaking havoc on immigrant families and communities here in the United States, the administration wants Mexico to carry out its dirty work south of our border. For one, the U.S. and Mexican governments are at the negotiating table, discussing a “safe third country” agreement that would return non-Mexican asylum seekers arriving at the U.S.-Mexico border to Mexico, forcing them to apply for safety in Mexico even though it is every individual’s right under international law to seek asylum in whichever country they feel safe. The administration has even tried to pay the Mexican government directly to deport more Central Americans from Mexico, though the Mexican government has already said it won’t accept this money. We know that if implemented, these proposals would only put migrants and asylum seekers in more danger in Mexico and overwhelm an already weak asylum system in the country. That’s why we’ve played a key role in opposing these proposals by working with our Mexican partners to denounce these plans and releasing statements that encourage members of Congress to speak out against this border externalization, waste of resources, and potential infringement on migrant and refugee rights.

To fund all its anti-immigrant policies, the administration has been trying to inflate the already bloated DHS budget for deportation forces, like ICE and CBP to carry out their work to detain and separate families and children. It even went as far as taking money from FEMA for ICE and continues to shift around funds from other agencies to DHS. And this is in addition to the billions it pays private corporations to run immigrant jails. That’s why we’ve also taken a stand against funding for the border wall, deportation forces, and implementation of restrictions to access asylum. Not only are these a complete waste of taxpayer dollars, but they will do nothing to keep us safer. These dollars would be better spent on accountability mechanisms for ICE and CBP, like body-worn cameras, legal assistance programs for recently arrived migrants, and cost-effective, community-based alternatives to immigration detention. The end of the fiscal year rolled around and only short-term continuing resolution passed to keep DHS funding at current levels until the beginning of December. This means we’ll have to ramp up the pressure again in the coming weeks, as Congress votes on funding for the next fiscal year.

What Can We Do?

The Trump Administration may have an anti-immigrant agenda, but we have one of our own—protect the rights of migrants and refugees. CALL your representative and senators and tell them to: