What This Company Did to Us: Rape and Displacement in Guatemala 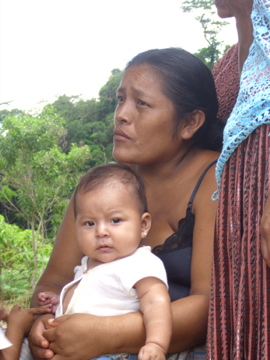 Irma Yolanda recounted the terror of the rape and eviction she faced in 2007.“It was like out of a movie. Planes, helicopters, flying in over our houses. No one knew they were coming.” Irma Yolanda told us. “The women were in our houses with our children. I was cooking the little bit of beans I had to give to my children and making tortillas… Then the [armed] men came in. They ate all the food they found in every home. After they ate, they threw gasoline over all the houses and set them on fire. We tried to find refuge in the mountains. But it was raining. My children shivering with cold. So there was nothing we could do but return.”

Two weeks later, these private security, police, and national armed forces returned to evict Irma Yolanda’s poor, Maya Q’eqchi community once and for all to make way for the nickel mining company that wanted their lands. The men were out working in the fields, so the women had to answer to the security forces.

“They asked, ‘Is your husband here? Who is the leader? Who is a member of the committee?’ I said, ‘I don’t know about any committee. I’m just here, living. I need land. I’m living here to take care of my children. And you all? Who are you? Where are you from? Who sent you?’ They said, ‘Don’t ask that.’ And that’s when they grabbed me. I tried to run. They grabbed my skirt. Then in front of my children, they did what they did with me.” 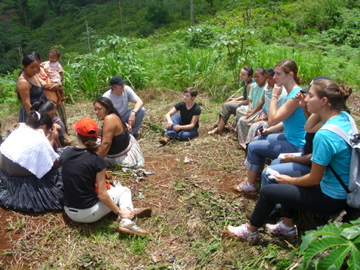 One by one the women told us their stories and asked us to support their struggle for justice. That day Irma Yolanda and ten other women from the community were gang raped by these security forces, a brutal tactic used to convince the community to abandon their homes and surrender their land to the mining company.

If I told you this story happened in Guatemala, you might believe me. A lot of horrifying truths have come to light about what happened during the country’s internal armed conflict and the genocide that resulted in the deaths of more than 200,000 mostly indigenous people in the rural areas of Guatemala. But what if I told you that this displacement, destruction, and rape, happened in 2007, long after the end of the civil war?

This summer, I participated in a delegation with the Guatemala Human Rights Commission USA to investigate the shockingly high rates of violence against women and femicide in Guatemala. Our visit to Irma Yolanda’s village, Lote 8, a small Q’eqchi community of 100 families living in the remote mountains in Alta Verapaz, illuminated a trend that is concerning many Guatemalan human rights groups. 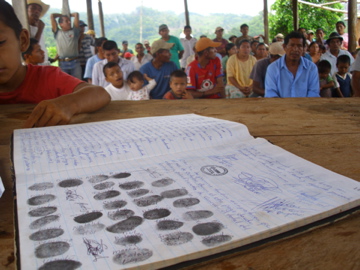 The people of Lote 8 gathered in their new community center to tell us about the eviction and show us documentation of the nickel company’s unfulfilled promises.During the internal armed conflict, soldiers were trained to use sexual violence as a tactic to tear apart the fabric of communities and force them to cooperate with the state. As we can tell from the story of the women of Lote 8, that practice still persists fifteen years after the peace accords were signed. Only now, instead of political control, the objective is often to clear lands to make way for economic projects like mining or agriculture. Despite the fact that they are violating Guatemalan and international human rights laws, the government officials and the companies responsible for these abuses are never held accountable. So they keep doing it.

Beginning in March of this year, communities in the Polochic Valley faced similarly violent evictions by the national police, members of the military, and the private security forces of a sugar cane company. Homes were burned and subsistence crops were destroyed. Left without shelter, land, or any means to survive, these 700 families have been facing increasing starvation, sickness, and ongoing violence from the security forces that originally displaced them. 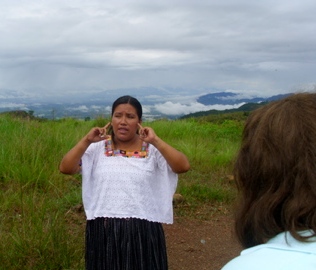 Human rights defender Maria Choc, who is working on both the Lote 8 and Polochic cases, accompanied us to the site of the eviction. Guatemalan and international human rights organizations have denounced these abuses and successfully called on the Inter-American Commission on Human Rights (IACHR) to intervene in this humanitarian crisis. In June, the IACHR ordered the Guatemalan government take steps to assure the health, safety and physical well being of these evicted indigenous farming communities. But six months later, the Guatemalan government has done very little to protect these communities or provide them land and basic goods they need to survive. To sign our petition calling on the Guatemalan government to provide adequate aid and protection to these communities, click here.

Meanwhile, the women of Lote 8 have now filed a lawsuit against HudBay Minerals, the Canadian mining company they claim is responsible for the abuses committed against them. Despite the knowledge that speaking out may put their safety at risk, they are seeking reparations, respect, and land titles for their community. They also hope that by bringing this case to the courts, it will raise awareness about these abuses so that others will not share their fate.

Rosa Elvira, pregnant with her first child, suffered a miscarriage as a result of the gang rape. She is now a leading plantiff in the case.“I will never be able to erase the memory of what they did to me,” said Rosa Elvira, another woman from Lote 8. “But all I can do is hope that one day the company that did this to me will pay. Maybe it’s not possible with the law here. But we know who is responsible, who was the intellectual author of this crime. We just ask for justice. We ask that people know what this company did to us.”

These photos were taken by delegation participant Chris Morales. To see all his photos from our trip, click here.