Editor’s Note: This is the fifth part of a series by Latin America Working Group Education Fund on the intersection of human rights, migration, corruption, and public security in Honduras and El Salvador. You can find the full series here.

Nineteen-year-old Kimberly Dayana Fonseca was shot and killed in Tegucigalpa as members of the Military Police opened fire on unarmed protestors rallying against fraud in Honduras’s November 26th elections. The teenager is one of eight people killed during protests that erupted across the country around the disputed elections.

The government declared a ten-day state of siege December 2, suspending constitutional rights. The decree set a 6 PM curfew banning citizens from public spaces and ordering security forces to remove protestors from streets and public spaces. Military are patrolling the streets and can detain anyone violating curfew. At least 500 people were detained in the first two nights.

Hondurans banged pots and pans from their homes to protest during the curfew. Many protests have been peaceful, although there has also been property damage and looting. Security forces are shooting and throwing tear gas at protestors and observers, including journalists and human rights activists.

As of December 4, 2017, Hernández is leading by a narrow margin with almost all votes counted (but not recounted): 42.98 percent to Nasralla’s 41.39 percent. Legislative and municipal electoral results are also in dispute.

Criticism of the elections is not limited to the vote count. The European Union observation team highlighted the use of public resources for the Nationalist Party campaign and the huge disparity in media coverage between the Nationalist Party and all other candidates. The government’s refusal to renew the license of a more critical television station, TV Globo, contributed to this skewed coverage. Lack of opposition party participation in the TSE weakens its legitimacy.

The presidential elections from the start were controversial. President Hernández managed to overturn the constitutional ban on presidential reelection when a Constitutional Court stacked with his nominees issued a publicly disputed ruling permitting reelection without going through the legal steps for reforming the Constitution. Reelection is deeply controversial in Honduras because the rationale for the 2009 coup, which fractured Honduran democracy and respect for rights, was that deposed President Manuel Zelaya had proposed a referendum to consider changing the ban on presidential reelection.

The Opposition Alliance brings together sectors of the left and center—the Liberty and Refoundation Party, members of the former Anti-Corruption Party, and the Innovation and Unity Social Democratic Party (PINU-SD).

Deep-seated corruption—symbolized by the sacking of $300 million from the nation’s health care agency, $5 million of which was allegedly channeled into Nationalist Party campaign funds—simmering anger over the coup, lack of attention to poverty and jobs, and systematic violation of rights are some of the reasons for President Hernández’s falling levels of support. Supporters credit his tough security measures for reducing Honduras’s stratospheric homicide rate.

Now What? Recounting the Vote

The Opposition Alliance is demanding a recount of disputed vote tallies with full participation of parties and international observers. Demands for a recount are coming from many sectors, including the business council COHEP. Civil society organizations are asking that the United Nations oversee the recount.

As of the morning of December 4, the TSE has refused to recount all of the vote tallies (the reports from each polling place) demanded by the Alliance. The OAS mission called the Alliance’s demand “understandable,” and underscored that the scrutiny needed does not end with the limited recount to which the TSE has agreed.

Honduran civil society organizations demand an end to the state of siege and respect for their rights to protest. The UN and OAS human rights agencies call for respect for Hondurans’ right to protest, for all actors to abstain from violence, and for “dialogue and genuine political participation for the search for a solution that is respectful of human rights.” The Latin America Working Group and other U.S. civil society organizations urge a suspension of U.S. military and police aid and for the State Department to hold up all aid subject to human rights conditions in U.S. law. 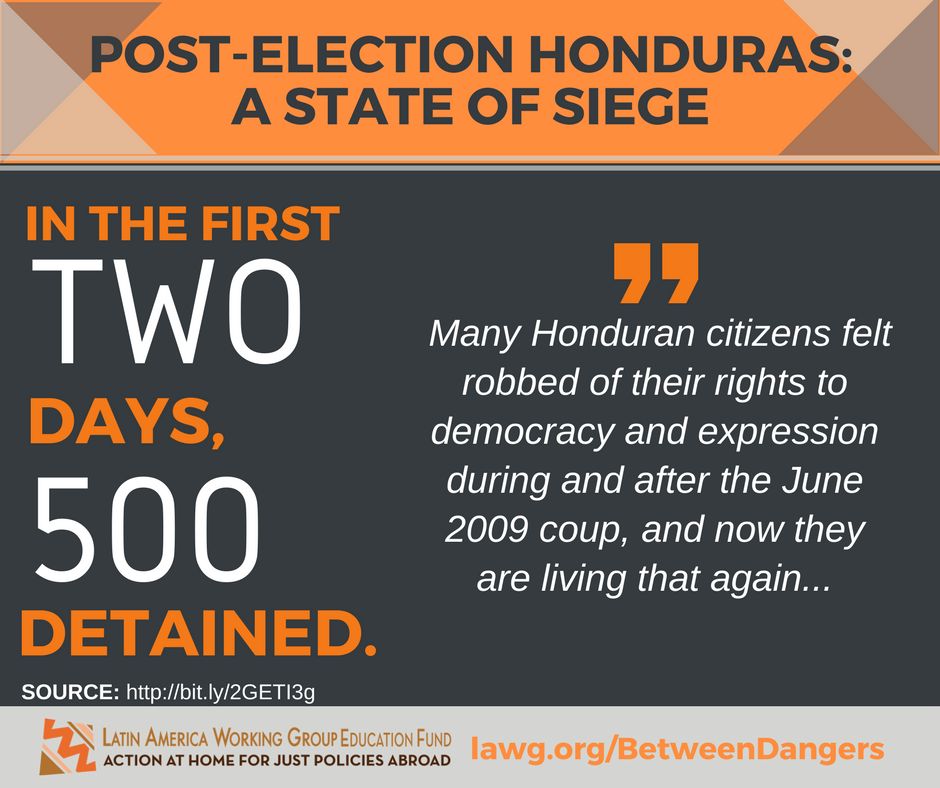 The U.S. Embassy has issued tweets calling for transparency and a recount with observation but so far has failed to back the full recount demanded by the Opposition Alliance—far short of a vigorous diplomacy in support of Honduran democracy.

Many Honduran citizens felt robbed of their rights to democracy and expression during and after the June 2009 coup, and now they are living that again as they face disputed elections—and once again, a state of siege. The international community must not stand idly by but demand an immediate end to the state of siege, respect for Hondurans’ right to protest, freedom of assembly and expression and a full and transparent vote recount with political party, international community, and Honduran civil society observation. Honduras’s 2009 nightmare must not be repeated.

Note: A shortened version was published in The Huffington Post.