Rev. Raúl Suárez: “Cuba is not the Kingdom of God but We Have Had Many Achievements” 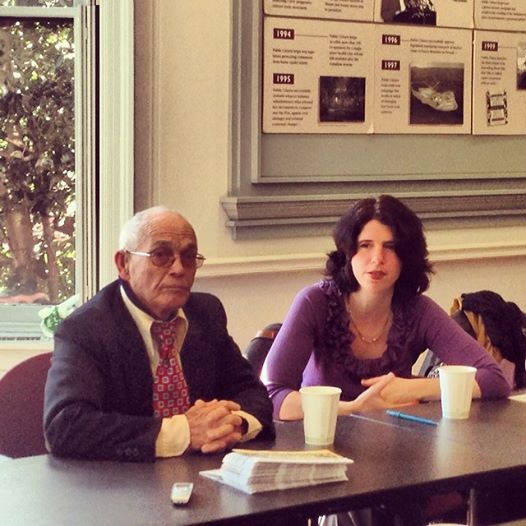 Reverend Raúl Suárez, the founder and director of the Martin Luther King, Jr. Center in Havana, Cuba, visited the United States this past week as part of a delegation of religious leaders speaking about religious life and freedom in Cuba. Rev. Suárez was the pastor of the Ebenezer Baptist Church in Cuba from 1971 to 2005 and was the president of the Council of Churches. On February 28, 2014 Rev. Suárez spoke on a panel organized by Witness for Peace, to talk about his trip, religious freedom in Cuba as well as the future of U.S.-Cuba relations. This is what he had to say:

The principal, historic churches of the U.S. understand that now is a historic moment. If the President [Obama] is pressured by the churches, Congressmen and other institutions in civil society then the President might change what he can change. The blockade is a combination of several laws enacted by Congress that the President cannot change but there are some things the President can change. Our work here has been a pastoral work. We are interested in politics but we are not politicians. We are interested in the economy but we are not economists, but we understand that there is a biblical and theological base that drives [these entities] and that is what we wanted to communicate to these politicians in Congress.

I’ve been a pastor for 60 years and I don’t like to read sermons, I like to look at people when I talk and look them in the eyes. You are witness that the news in this country [U.S.] is biased toward Cuba, saying that it is hell. Cuba has many problems but Cuba isn’t hell either. We have many good things that have been achieved in our country [Cuba]…Cuba is not the Kingdom of God but we have had many achievements. Well, I end here because I am more interested in your questions.

Question 1: How has your trip been and do you have any hope that there will be some/ any changes soon?

It’s a mixture. Life has taught me that change isn’t up and down. I don’t have much hope in politicians, or in Congress, or in President Obama. My hope lies in the North American people and that is why Witness for Peace is such as important partner. If I’m not mistaken 95% of people who travel to Cuba come back with a better view of Cuba and many come back very unhappy with their government. They are unhappy because their government lied to them! They [the public] have been told things that are not really Cuba’s problem. We do have real problems but politicians do not know about them, they live in their world. They don’t know what poverty, hunger, not having doctors is like. When they talk about these things they talk from a distance but the people live a different situation.

When we met with Congress they took notes and we had in our favor Senators that had gone to Cuba recently. For example, Senator Tester went to Cuba and when he returned he spoke in the Senate about Cuba’s healthcare. The Cuban-Americans in Congress were insulted by this but this is where hope lies. Other voices are also being heard. But, in the Department of State it wasn’t that way. It was very bureaucratic but it gives us hope that they had to listen to another point of view. We leave with hope. We did what made our conscience happy.

Question 2: What do you think of the economic changes in Cuba and how will that affect the Cuban people and the Cuban society?

In 1991 Cuba entered an economic crisis that made it extremely hard for the Cuban government to maintain the achievements of the Revolution. At the same time there was this notion that socialism meant that the government had complete control over the government and civil society. This wasn’t working anymore so we had to reorient the economy, decentralize the state, and allow for the creativity of the Cuban people. 70% of the population is employed by the state and that is unproductive, it doesn’t produce food. It was pure bureaucracy. The state was like a big monster, unproductive. The Ministry of Agriculture had almost a million people but they weren’t people working the land. The government then decided to give 13 hectares of land to anyone who wished to work the land for 10 years. The government has given out more than a million hectares of land to the people. Another reform is “cuenta propismo” where people are allowed to build a small business in their home. Right now there are 400,000 small businesses.

But what is the difficulty with all this? And I’ll be frank. The concern is that a capitalist spirit may start to develop within the Cuban society. Capitalism is individualist, based on consumerism, and egotistical. The goal is to always want more and we do not want that for Cuba. We want these small business to help their families ameliorate their own life but not on the idea of getting rich because that creates inequality. On the other hand, the families that live abroad are helping families in Cuba to start their small businesses. So then the Cuban landscape starts changing. For example, all those American cars that were languishing in peoples’ front yards and needed to be repaired are now repaired. They serve as taxis and rentals. You can see cars from the 30s, 40s, 50s and 60s. Accidents have increased in Havana because there are more cars on the road. All these changes have two sides.

The Cuban government has also had some ideas that we haven’t liked or agreed with. For example, they are constructing two golf courses in Cuba. This means an extraordinary use of water, it transforms the environment and they are also making houses and hotels for rich tourists when we have housing problems in Cuba. People don’t understand that. The MLK center did not agree with the new projects and we protested and spoke out against it. Golf in the U.S. and Canada is a sport that is for the politicians and the rich. In Cuba no one plays golf! We play baseball! In general we think what needs to be done is being done. We have to make improvements to our own economy. But we also want the economy and ethics to walk hand in hand, but with the current changes that is not happening. We have faith and hope but we also have worries and fears.

To end I would like to say what I say to all the delegations that visit me in Cuba. Between you and me there are a lot of differences. It’s a different language, political system, 90 miles of water separate us, it’s a different culture, and many things are different. For the last 54 years our governments have not had the guts to look each other in the face but Obama did shake Raul Castro’s hand. Instead of talking about Mandela he talked about Cuba and he didn’t speak well of us. He said that it was a diplomatic handshake, that it didn’t mean anything. But for me this does mean something. I feel the warmth in this room and right now we are human beings not North Americans or Cubans. In this gesture is the presence of God, he wants us to live like brothers and sisters. God bless you.