Over 60,000 families, men, women, and children who have been returned to Remain in Mexico are waiting in danger throughout their asylum proceedings. And the numbers keep growing. The administration calls this the “Migrant Protection Protocols.” We call it the #MigrantPersecutionProtocols. This needs to end. We can’t let more people be turned away, waiting without shelter and in danger.

Sham virtual courtrooms costing $20 million were created in tent facilities to hear 400-700 asylum cases per day. Apart from violating asylum seekers’ rights to due process, the public is also barred from entry. This is outrageous. The administration is trying to rush through these cases,  denying asylum seekers their fair day in court to try to deport them more quickly.

To add insult to injury, a transit asylum ban was implemented to deny protection to those who traveled through other countries first before arriving at our border, denying access to asylum to everyone but Mexicans.  “Safe Third Country” agreements were signed with Central American countries that are not safe. This means that migrants from other countries will be sent back to the very conditions that they were fleeing in the first place.

These are not the principles under which this country was founded. We don’t turn our backs on people when they need us most. The actions of our government undermine what it means to be an American. Join us in speaking out. 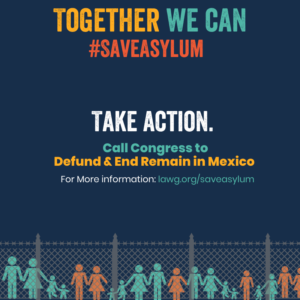 in a Week of Action to #SaveAsylum THIS week!

Here’s what you can do to get involved:

Together, let’s make their phones ring:

Together, let’s get trending:

Join us in this Week of Action to raise our voices and tell the administration that we will not let them shut the door on asylum. Your action is vital.

All about the ‘Remain in Mexico’ page

“Opposing Efforts to Shut the Door on Asylum Seekers” blog