Editor’s Note: This blog was first published on Medium. 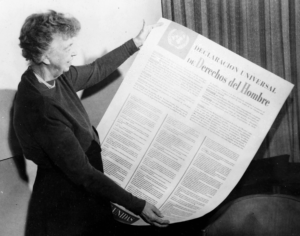 Eleanor Roosevelt and the UN Universal Declaration of Human Rights in Spanish.

“The Unalienable Rights Commission” — it really does sound like Secretary of State Mike Pompeo is looking for rights he can deny, ignore, or alienate. The Commission was launched on July 8 to sort through which rights the State Department should uphold in foreign policy — and which can be tossed.

Commentators fearing that this commission’s findings will affect the treatment of same-sex marriage and reproductive rights are on target. But there’s more to fear.

A look at what Secretary State Pompeo did to the State Department human rights reports last year gives us a clue. These reports are published every year, and they are the official position of the U.S. government on human rights practices in nearly 200 countries and territories around the globe. In 2018, the reports were about to be rolled out when State Department leadership stopped their release. For nearly two months, the publication was held up while they slashed out sections of the reports that State Department staff around the globe had labored to prepare.

Reading through the Western Hemisphere reports, I could see they also decimated entire sections on women’s rights. Discussions of discrimination against women in employment were gutted. In this “Me Too” moment, the subsections on sexual harassment, already minimal, were trimmed to barebones. Even the sections on violence against women, on domestic abuse and rape, were cut down to size. Guess the rights of more than half the world don’t matter.

LGBTQI rights also got short shrift. It isn’t just a question of the treatment of same-sex marriage. It’s also about coverage of violence against transgender people and of severe discrimination.

Sections on the rights of ethnic minorities were chopped in half. Coverage of discrimination against Afro-descendant and indigenous communities — a significant rights violation in many countries in Latin America — was slashed.

Economic rights and labor rights may also be on the chopping block this time. And no doubt, the right to a healthy environment won’t make the cut.

A PBS analysis of the commission’s members also suggests some are unduly deferential to different governments’ views of human rights and soft-pedaled violations by regimes such as Saudi Arabia and Turkey.

Why does this matter? If the State Department narrows its vision of what rights are fundamental, it will stop defending those rights abroad. We’ve already seen embassies told to stop flying the rainbow flag. If U.S. embassy staff are told to care less about the rights of women, LGBTQ persons, racial minorities, and about the right to protest and the right to strike, not to mention the right to food, water, and a healthy environment… Well, they will care less. Or be forced to. A powerful voice defending vulnerable populations will fall silent.

Corrupt or authoritarian governments will feel they have more leeway to discriminate. And Pompeo launched this reexamination to affect international organizations like the United Nations — with the intent of muting not just the United States’ voice, but the international community’s voice, on rights Pompeo feels are unnecessary. Indeed, he hopes this will be “one of the most profound reexaminations of the unalienable rights in the world since the 1948 Universal Declaration.”

This narrowing of rights championed abroad will come back to haunt us in the United States, too.