Today marks six months since 43 students from a rural teachers college in Ayotzinapa, Guerrero were forcibly disappeared.   The students were attacked by local police, who allegedly turned them over to a local criminal group to be killed.  To date, the remains of only one student have been identified.  Although six months have passed, many questions about the case remain unanswered, and the victims’ families have been left without justice.

Stand in solidarity with the families of the Ayotzinapa–Can you take 5 minutes to share this image on Facebook, Twitter, or email it to a friend today? 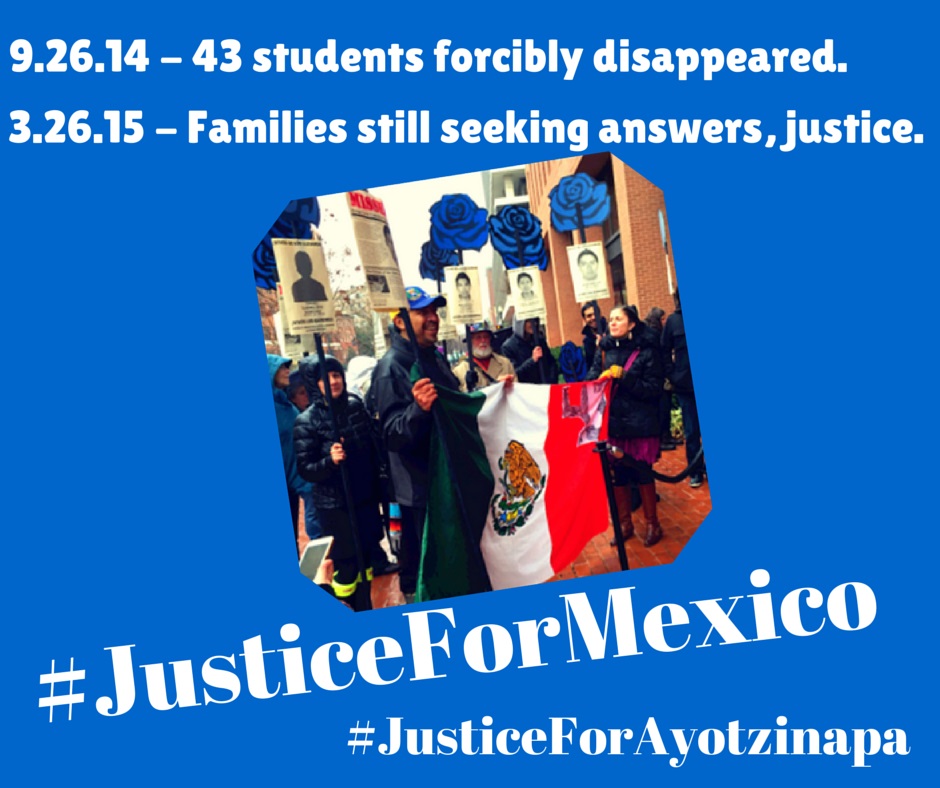 Although authorities tout that 90 people have been detained in connection with the students’ disappearance, the victims’ family members are concerned that not a single official has been charged with enforced disappearance.  Furthermore, the government´s line of investigation is not backed by the scientific evidence and fails to scrutinize the involvement of higher level authorities, including security forces.

Demand justice for the Ayotzinapa 43 and all the disappeared in Mexico—share this image today!

The disappearance of the 43 students is not an isolated case, but emblematic of broader patterns of violence, enforced disappearances, corruption, collusion, and impunity across Mexico.  In the last eight years, an estimated 100,000 people have been killed, and over 26,000 people are missing across Mexico.  The families of the students and all the other disappeared deserve justice.

Help spread the word and build international support for justice for the disappeared students.  Share this image with five friends today!

Note:  LAWG joined with international human rights organizations to call on the Mexican government to fully support the work of the Inter-American Commission for Human Rights-appointed Interdisciplinary Group of Independent Experts, which has been tasked with reviewing the case of the disappeared students.  To read the joint statement, click here.