Stand Strong for the Rights of Migrants and Refuges

It’s been a tough start to the year. Attacks against migrants and refugees have continued relentlessly. But even in the midst of the chaos, we’ve relentlessly stood strong and pushed forward with you. Our activism has paid off. And we’re planning to stand up to each and every one of the administration’s threats to rip families apart and leave those fleeing persecution stranded without protections.

As Temporary Protected Status (TPS) beneficiaries continue to live in limbo, lawsuits recently managed to extend protections through January 2020 for the over 300,000 Hondurans, Salvadorans, Haitians, and Nicaraguans who had been targeted by the Trump Administration with removal of their legal status, some after decades of building their lives in the United States. But living from one short and inconsistent extension to the next is no replacement for permanent protection. And it’s no way for these members of our communities to live. That’s why we’ve pushed for a pathway to citizenship for TPSianos. 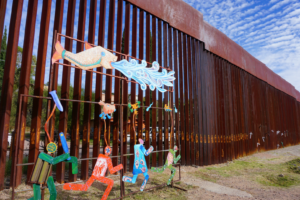 Art on the Mexican side of the U.S. border in Nogales, AZ. Photo by Daniella Burgi-Palomino.

After months of our tireless activism together, bills have been introduced in both the House and the Senate with the aim to protect millions of Dreamers and TPS recipients. In the House of Representatives, H.R.6 – American Dream and Promise Act of 2019 was introduced with an amazing 227 cosponsors. In the Senate, there are two bills: S. 874 – Dream Act of 2019 and S. 879 – Safe Environment from Countries Under Repression and in Emergency (SECURE) Act. This is an important first step to ensuring permanent protection for these long-standing members of our communities. But, it’s only the first step.

We now need to get these bills passed. And we’ve already begun the work to educate Congress and get them to do so. On International Women’s Day, we hosted a congressional briefing with partners to bring women TPS voices to the halls of Congress and to highlight the negative impacts of leaving individuals like them without permanent protections. And we didn’t stop there—we met one-on-one with staffers of new members of Congress to make sure they understood the importance of protecting TPS and DACA recipients as well as the rights of all migrants and asylum seekers. We updated and shared our resources—like a memo on the Negative Consequences of Ending Temporary Protected Status (TPS) for U.S. Investments in El Salvador and Honduras—so that you’d be armed with the facts you need to take action with your elected representatives.

Standing Up for Families and Children at the Border

The hateful rhetoric against asylum-seeking individuals, families, and children arriving at our border has not stopped. And this administration continues to vilify asylum seekers, suggesting their claims are fake and criminalizing the very act of seeking protection. Yet we know that the reasons Guatemalans, Hondurans, and Salvadorans flee their homes haven’t changed, and they have a right to seek safety. They’re organizing together to migrate in groups to leverage safety in numbers. We’ve lifted up these concerns expressed by our partners in the region, working hard to educate on why we’re seeing an exodus. 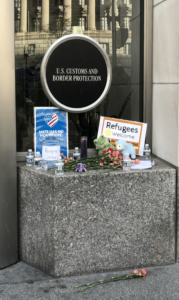 Memorial display in honor of Jakelin outside of the Customs and Border Protection headquarters. Photo by Andrea Fernández Aponte.

The administration claims that we have a crisis at the border. We know the crisis is one that the administration itself has created. These illegal policies turn away individuals who present themselves at ports of entry to seek asylum or put them on lengthy waitlists, while arbitrarily only processing a few individuals a day. The reality is that we have witnessed a higher number of family units and unaccompanied children arriving at our border in the last four months, but overall apprehension numbers are not the highest we’ve seen in the last four decades.

One of these new illegal policies has meant that asylum seekers arriving at ports of entry on the U.S.-Mexico border will be returned to Mexico to wait for the duration of their U.S. immigration proceedings. The “Migration Protection Protocols” (MPP)—frequently referenced as “Remain in Mexico”—has nothing to do with migrant protections. In fact, it does just the opposite. It breaks both U.S. and international law such as by violating due process and creates a logistical nightmare for obtaining legal counsel. It forces asylum seekers to wait in danger in Mexico, which is experiencing the worst homicide rate ever recorded, and disappearances, extortion, and kidnappings are common human rights violations that migrants experience along Mexico’s northernmost states. And it strains northern border civil society shelters, which lack sufficient resources as they are not intended for extended stays to wait on the backlogged U.S. asylum system, or simply don’t exist everywhere along the border.

Since the beginning of this policy announcement in December 2018 and the start of its implementation in January 2019, we have spoken out against it, educating about why it’s illegal, dangerous, and must end. We mobilized rapidly, meeting with members of Congress and denouncing the policy with our Mexican partners in statements and a letter to former DHS Secretary Nielsen. The letter, signed by 60 organizations, was used in one of the lawsuits, Innovation Law Lab v Nielsen, challenging the policy. As a result of the case, a federal judge issued a preliminary injunction to halt the policy at the beginning of April. But a week later, a federal appeals court temporarily lifted the injunction, and the Trump Administration has announced it will continue with implementation. As of early April, around 1,400 migrants have been returned to Mexico, mostly to Tijuana, including families and children. And the number of individuals returned, the risks they face, and the time they must wait will only grow.

We will continue opposing this policy and the other illegal practices that restrict access to asylum at the border. Instead, we need to make sure that U.S. Customs and Border Protection (CBP) is held accountable for these illegal actions, ensures due process for asylum seekers, and hires child welfare, medical, and language professionals. CBP should use existing funding to provide children and families with care and services to make sure no one suffers the fates of young Jakelin Caal Maquin and Felipe Gomez Alonzo from Guatemala, whose deaths in CBP custody could have been prevented. And ultimately, we need more judges to clear up the years-long backlog in immigration courts.

The administration is going to keep fabricating a crisis that it has the means to resolve with existing resources. We need to keep pushing back on its call for more resources for DHS, in particular for Immigrations and Customs Enforcement (ICE) and CBP. It already has more than sufficient resources, it’s just been investing it all the wrong places to harm border communities and migrants arriving at our border. Under this administration alone, CBP’s budget went from a bloated $13.3 billion to $17.3 billion. We need to keep pushing back against funding for the wall, more agents, and more detention beds. 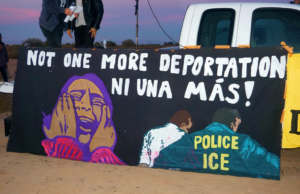 This is particularly important because, with the current shake-up at DHS, we know whoever replaces former Secretary Nielsen could implement even harsher and crueler policies. Interim DHS Secretary Kevin McAleenan is supportive of reinstating family separation. He even recently stated that he had no regrets about last summer’s appalling “zero tolerance” policy—which left hundreds of children traumatized and some still not reunited with their parents almost a year later. He’s also indicated that he’s open to changing the Flores protections to keep children detained in immigration jails for longer.

And we’re seeing more threats against asylum seekers in a new ruling by Attorney General William Barr. Set for implementation in the next few months, it would keep asylum seekers detained indefinitely while they wait for the results of their asylum proceedings. This goes hand-in-hand with the administration’s call for funding a record number of detention beds to arrest and deport more individuals. Instead, we need community-based alternatives to detention, like family case management programs, which are much more cost-effective and humane.

Despite our small victories, there’s still much more work to be done. Together, let’s build some momentum for more just and humane policies toward migrants and refugees from the region and toward our own members of our communities.