Still Dreaming, but with Hope

You might remember this year’s theme for National Days of Action for Colombia was everyone deserves a place to call home. With over 5 million people forcefully displaced as a result of Colombia’s internal conflict, victims of violence are now hoping that the Colombian government will make good on its promise to help them return home, restoring their lands through the Victims’ and Land Restitution Law.

In a joint project with our partners from Lutheran World Relief and Agenda Caribe, LAWG staff went to Colombia’s Caribbean coast to investigate if the Colombian government’s landmark initiative is beginning to deliver reparations and land restitution to the war’s victims.

We found that despite the promises of Colombia’s positive Victims’ Law, land restitution on the Caribbean Coast has barely begun.   Our report, Still a Dream: Land Restitution on Colombia’s Caribbean Coast, shows the tremendous obstacles that face implementation, especially the lack of protections for returning communities, as well as the pressures that are causing small farmers and Afro-Colombian communities to continue to be pushed off their lands.  As Colombia’s peace negotiations advance, the ability of the government to deliver on its promises to victims of violence is essential to the construction of a just and lasting peace. We provide recommendations to the Colombian government and international community on how to fairly, effectively and safely advance land restitution and reparations. 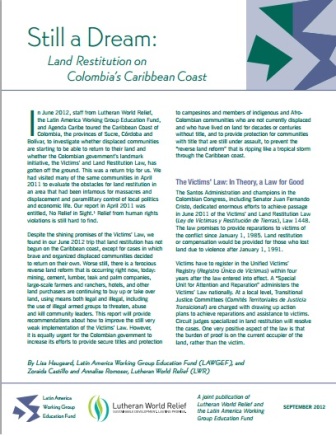 Five million is just a number.  But there is a name, and a tragic and heroic story, behind each of those five million. These tragic stories of Colombian women, men, and children who have had to flee their homes are rarely heard.  To understand the social impact that violence and forced displacement has had on Colombian society, we have to listen to the victims and their harrowing stories. And now we can do this by reading the vivid personal testimony in Throwing Stones at the Moon: Narratives from Colombians Displaced by Violence, a part of the Voice of Witness book series, edited and compiled by Max Schoening and Sibylla Brodzinsky. Throwing Stones at the Moon illustrates the need for the Victims’ Law to fulfill its promise and become a reality. Every single person displaced by Colombia’s violence deserves a place to call home.

Check out some excerpts of the book on our website.