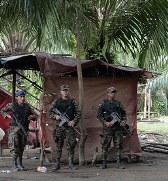 Take action today to end U.S. funding to abusive police and military in Honduras!
In the Bajo Aguán region of Honduras, not a day goes by in which human rights activists do not face threats, torture, repression of free speech, and assassinations. Who is committing these abuses? Not only private security guards and hired assassins, but also Honduran military and police agents that receive aid and training from the U.S. Government.

Take action today to end the violence and push for justice in Honduras!

Since the 2009 coup, dozens of Honduran LGBT activists, union leaders, human rights defenders, and journalists have been continually threatened and killed. In the Aguán region alone, where there have been years of conflict between small-scale farmers and owners of African palm plantations, over 45 land-rights activists have been murdered. In most of those cases, the private security guards who allegedly committed the crimes have enjoyed complete impunity because the Honduran government is neither investigating nor punishing them.

In mid-August, the Honduran government launched a joint military-police action in Bajo Aguán known as Operation Xatruch II. At least nine peasant organization members have been killed since this operation began. Human rights groups report that police and military associated with Xatruch II have tortured community members. In one case, the 17-year-old son of a peasant leader was allegedly tortured by police and military, doused with gasoline and threatened with being burned or buried alive. No one has been held accountable for these abuses. And yet the U.S. government keeps sending military aid. This is unacceptable and it has to stop.

Ask your representative to sign the letter urging Secretary Clinton to enforce our human rights conditions and suspend military aid to Honduras now!

Luckily, we’re not the only ones who are outraged by the use of U.S. taxpayer dollars to fuel the violence. Representative Jan Schakowsky from Illinois agrees! That’s why she wrote a letter to Secretary of State Hillary Clinton asking her to freeze funds going to the Honduran police and military—and to put pressure on the Honduran government to investigate these crimes and hold these violent actors accountable.

This letter is a great opportunity to make real change, but it will only be effective if we can convince at least 50 other members of Congress to join Rep. Schakowsky in speaking out. This week, your member in the House of Representatives will return from recess.

Will you help us flood your representative’s email with requests to sign this important letter?

Thanks so much for your support at this crucial moment. To see a copy of the letter and the current signers, click here. To make a phone call, click here for instructions. The situation in Honduras is bad, but we have the power to help make it better. So we hope you’ll join us today in making that happen.

Photo from hondurasblog2010 via Creative Commons.