Syria, Sudan, and Colombia? The Human Cost of War

What do Colombia, Syria, Sudan, and the Democratic Republic of Congo have in common? Believe it or not, Colombia only ranks behind Syria in the number of internally displaced people, with over 5.7 million fleeing their homes due to conflict. That striking number is just one example of just how costly the last five decades of internal conflict has been to Colombia’s civilian population.

What are the human costs of a war that has seen so many victims from all armed actors, including guerillas, paramilitaries, and members of the Colombian army? Check out our new infographic, The Human Costs of the Colombian Conflict. 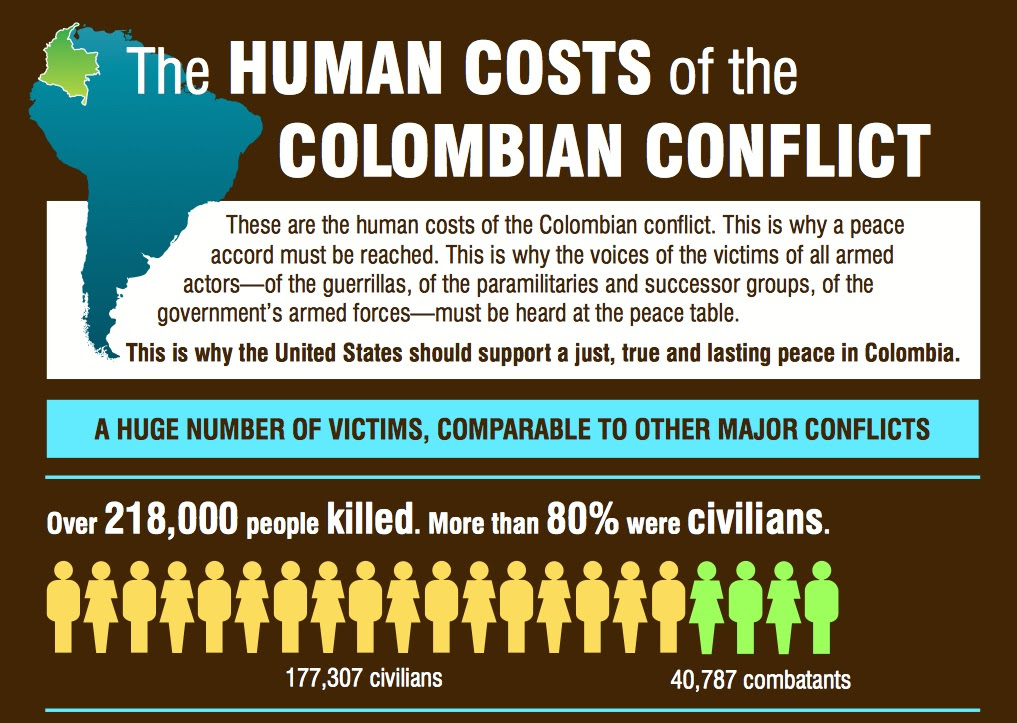 But these are just numbers. There is a name, and a tragic and heroic story, behind each of those statistics. To understand the impact that violence has had on Colombian society, we have to listen to the victims, their harrowing stories, and their proposals for change. That is why LAWG organized with the Washington Office on Latin America a delegation of victims of the Colombian conflict to come to Washington DC, and emphatically tell our government that now, more than ever before, is time to support a just, true, and lasting peace in Colombia.

United in their call for peace, members of the delegation presented their vision of what a peace accord should include and their proposals for reaching that elusive peace. As the war continues to rage during peace negotiations, all members of the delegation were clear in stating that the United States can play an important role by reorienting aid away from war and towards peace accord implementation. As you can see from the Human Cost of the War, peace can’t come quickly enough.

We take pride, and often brag, about our active, knowledgeable, and thoughtful supporters. We’re grateful that you take the time to join our advocacy actions and, to keep you informed, we’re sharing this latest analysis that serves as a foundation for our organizing.