Tell the State Department that you Support Educational Exchanges with Cuba!

You may have heard about the State Department’s denial of visas to 11 respected Cuban scholars who were planning on attending the Latin American Studies Association meeting in San Francisco this week—while at the same time approving visas for two prominent Cubans invited to the same conference. The approvals of visas to Mariela Castro (a sexologist and President Raul Castro’s daughter), Dr. Eusebio Leal (the historian of the City of Havana), and two weeks earlier to Josefina Vidal (head of the North American Section of MINREX, Cuba’s foreign ministry). BTW, we applaud these visas, as there should be free and easy exchange between Cuban officials and U.S. officials, too. (Aren’t they “people,” too?)

The Cubans who were denied visas are a “Who’s Who” of Cuban academe who favor increased exchange between the United States and Cuba, and even the normalization of relations. They are effective in their messaging. Perhaps that is why they were denied?

The State Department doesn’t make it too easy to contact them directly. However, that doesn’t mean that they shouldn’t be. Follow these couple steps below to let the State Department know that you support educational exchanges with Cuba. We want to see a free flow of ideas on both sides of the Florida straits! 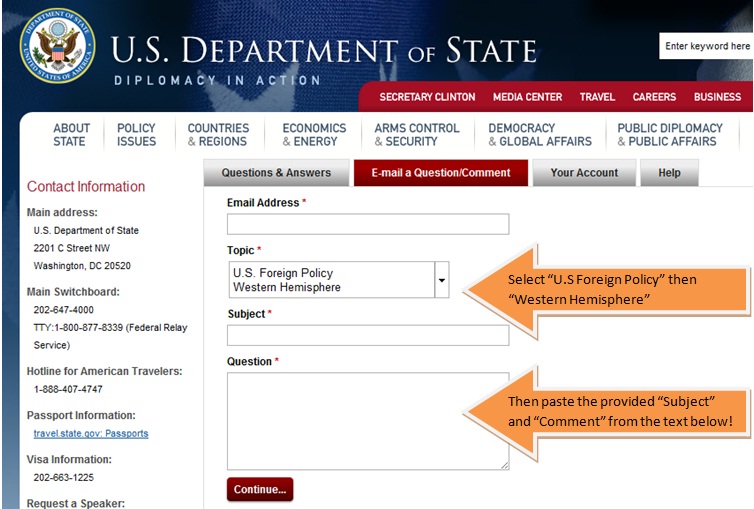 I want to express my distress about the recent denial of visas to eleven Cuban scholars scheduled to participate in academic exchange at the Latin American Studies Association (LASA) meeting in San Francisco. If U.S. policy is to promote educational exchanges, what better way is there than to allow U.S. academics and Cuban academics to meet face-to-face and to share ideas and research.

It appears that the visas were denied in an arbitrary and contradictory manner—to respected scholars who have previously and recently been given visas to enter the United States to teach in some of our most prodigious institutions of higher learning. These denials contribute nothing, save confusion and perhaps even discouragement of the desired academic exchanges.

I support engaging the Cuban people through academic, people-to-people, and religious exchanges as, and only as, a needed first step in returning the fundamental right of all Americans to travel to Cuba.

Thanks for your continued advocacy on behalf of the End the Travel Ban campaign !