Thank You for Calling for Peace in Colombia!

Peace in Colombia seems finally reachable—not there yet, but on the horizon—and so all your efforts to support peace and human rights are more important than ever.   You made a heroic effort in the last few months so that, for once, a clarion call for peace is coming from the United States.

This alert is not to tell you to do more (though we will soon), nor to ask for funds. Instead, it is to say: You are making a difference. Thank you for all that you have done to support peace and human rights in Colombia!

Your support was crucial in convincing 62 members of Congress to sign a congressional letter calling on the State Department to support peace negotiations.  This support for peace from members of Congress not only received widespread coverage in Colombian news outlets, it also drew a direct response from government and FARC negotiators.  The FARC response acknowledged for the first time the need for a truth commission to address human rights violations perpetrated by all actors in the conflict, including themselves. The letter inspired similar statements from around the world. And the Obama Administration has since ramped up its statements in support of the peace process. 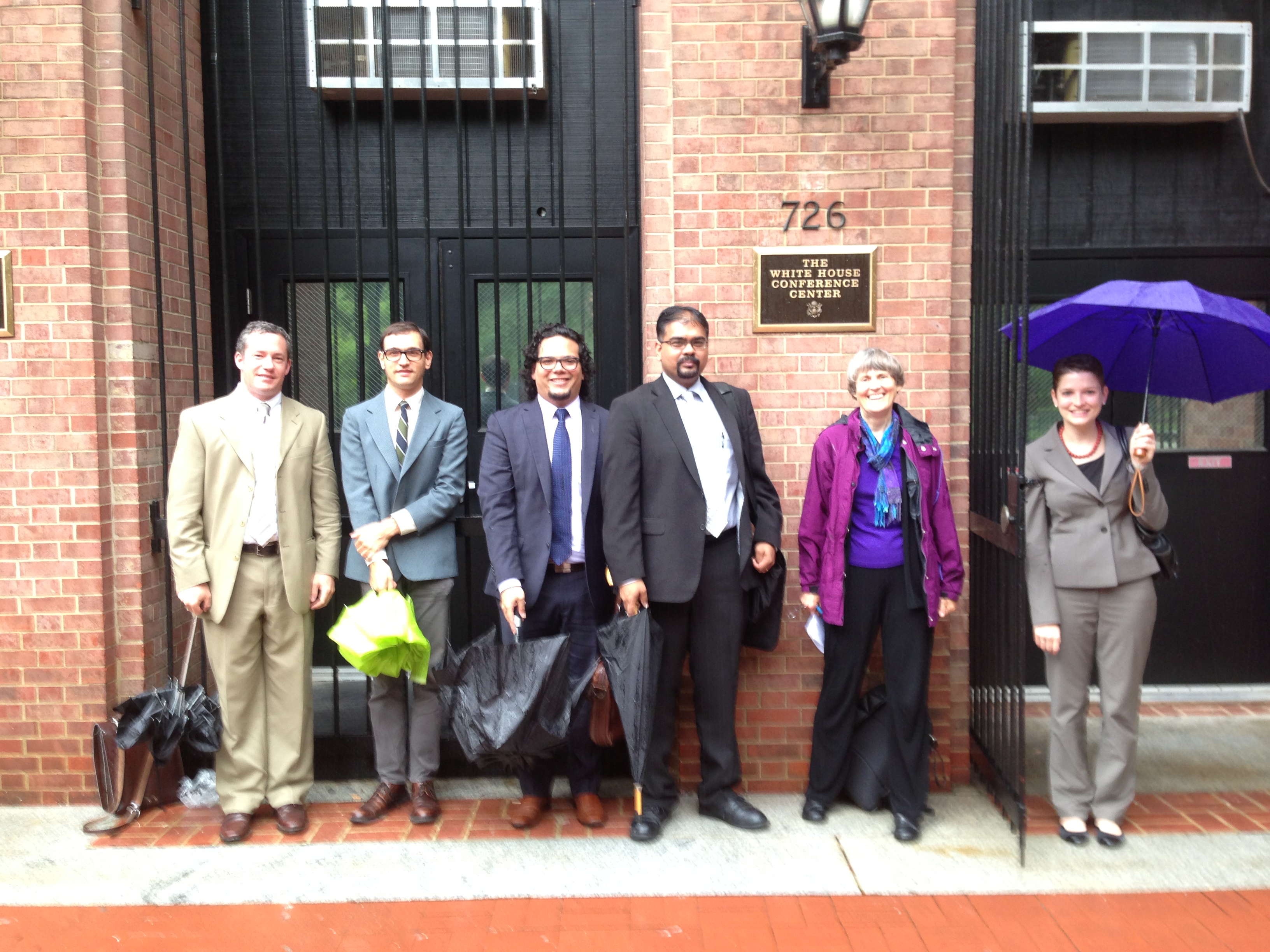 Unfazed by the rain, members of the United Church of Christ, Witness for Peace, Latin America Working Group, Mennonite Central Committee, and Jesuit Refugee Service/USA pose outside the White House Conference Center after delivering the DOPA petition and interfaith letter in support of peace in Colombia. Click to enlarge.

You and over 4,400 dedicated activists from around the country signed our petition on change.org addressed to President Obama outlining positive steps the U.S. government can take to support the peace process in Colombia. When we met with President Obama’s advisor to deliver the petition and an interfaith letter to the White House earlier this month, we were able to send our collective message and emphatically say: Now is the Time for Peace with Justice in Colombia!

And you, along with activists, children and faith communities throughout the United States and Colombia, participated in this year’s Days of Prayer and Action.  Empowering activists and communities to organize public events and worship services dedicated to Colombia, Days of Prayer and Action brings together activists and the faith community to shine a light on the human rights crisis created by the Colombian conflict. This year, faith leaders held a public rally in Bogotá.  Over 56 faith leaders signed an interfaith letter addressed to President Obama and Secretary Kerry calling on the U.S. to prioritize human rights and peace in Colombia. After being forced to flee their homes and subjected to unspeakable violence, Colombians are speaking out for peace. Days of Prayer and Action allows all of us to join the call for peace.

We are in deep gratitude and owe you and the rest of our activists an enormous thanks for participating in these actions.  Be sure to check out the Days of Prayer and Actionfacebook page to see many of the wonderful actions and share your craft projects and public events from around the U.S. and Colombia.

We have made an impact and have gained momentum, but our work is not done.   We need to ensure our country stays the course for peace; to advocate for a real voice for victims of violence in the peace process and its aftermath; and to change, once and for all, our nation’s aid to Colombia, so that it is not aid for war, but aid for peace with justice.

Stay tuned for more updates by visiting our Stand by Colombia’s Victims of Violencecampaign page and be on the lookout for action alerts on the critical human rights situation in Colombia.