The Colombian Conflict and Peace: Perspectives from Catholic Afro-Descendants

Three Catholic leaders from Colombia participated in a discussion at the Washington Office on Latin America about the ongoing-armed conflict in Colombia and the current peace talks in Havana. The panel consisted of Sister Zoila Cueto of the Diocese of Buenaventura, Father Sterlin Londoño of the Diocese of Quibdó, and Sister Lucero Machado of the La Playa Educacional Institute in Nariño.

Paying particular attention to Afro-descendant and Indigenous communities, they contributed to the general discussion about the armed conflict by focusing on the most vulnerable and affected populations. Below are some of the points they raised. To watch the full discussion, click here. 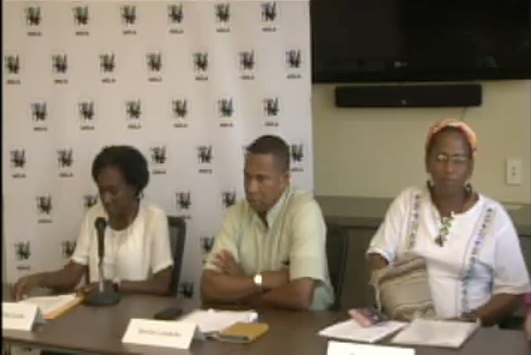 From left to right: Sister Zoila Cueto, Father Sterling Londoño, and Sister Lucero Machado.Zoila Cueto talked about Tumaco, a port city and municipality in Nariño Department by the Pacific Ocean:

We also have an increase in explosive devices, anti-personnel mines, harassment, and aggressions directed against communities that are identified as informants or collaborators of these groups. The Pacific Coast rate is higher than the national average in unmet basic needs, a condition that leads some people to be willing to carry out illegal activities, participating in drug trafficking and smuggling.

What are the causes of displacement? Clashes between the police and army and illegal armed groups fighting for the control of the territory, eradication of coca crops, mining exploitation without consent, and recruitment of minors.

In the middle of the conflict, we are called to rebuild our social, cultural, religious, and sports life, to resume our organizational practices.

We also appreciate the support that was given in part to the completion of the Afro-Colombian Congress, a meeting  that over a thousand people attended, and that the government provided us with some resources. But what do we worry about is this situation regarding the victims. We did not register in the Pacific even one case of individual reparation, collective compensation, or land restoration, and already we are completing two years after the Victims’ Law took effect.

We are concerned about the fact that the threats are increasing every day and the government does not have a mechanism for the collective protection of leaders.

We are worried in a structural way about the systematic killing of women. I had to face moments of confrontation, I had to go through moments of displacement, and in those difficult moments the women are the ones who stand up. We men go under the bed, and more than one man has had to protect himself under the skirts of women. And if the women, who are the nucleus of resistance, are killed, it means that the communities are going to disappear.

We trust the peace process that is happening in Havana, but we do not understand the double logic that in Havana people talk and in Colombia people fight with arms. We do not understand. We also do not understand why communities, organizations, and groups (whether organized by gender, age, or ethnicity) are not included in the dialogue, when it is us who have suffered the conflict.

In terms of human rights violations in Buenaventura, it has intensified in 2007, but in the last two years, in 2012, it has intensified even more because now we have the presence of the paramilitaries known as La Empresa, los Urabeños and los Rastrojos. So there is a dispute for the territory, and more clearing people from land, using arms.

Everybody knows the situation in which people are living in Buenaventura, both national and international organizations, but it seems that they are very slow in taking action and urging changes, especially to the local government and the Colombian government.