The Labor Action Plan in Colombia: “When will it be enforced?”

Nowhere in the world is the situation for unionists more dangerous than in Colombia. Approximately 3,000 trade unionists and labor activists have been murdered since 1986, with the great majority of these cases still unresolved. Leaders routinely receive death threats and members of unions are fired as punishment for their membership. In order to help remedy the dire situation, the Labor Action Plan (LAP) was signed between the United States and Colombia in April 2011 as a forerunner to the U.S.-Colombia Free Trade Agreement. The goal was to clean up the rampant labor rights violations and provide protection for workers’ rights. Unfortunately, progress has been slow and the abuses continue… 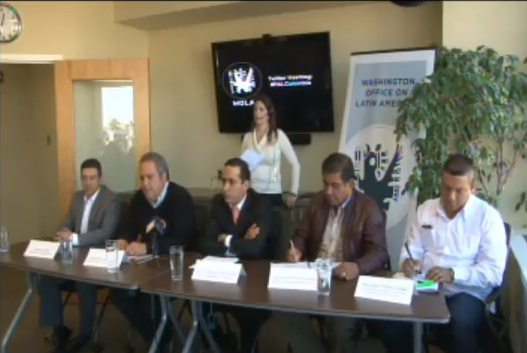 On February 12, 2013, the Washington Office on Latin America hosted a talk titled “Labor Rights in Colombia: Ongoing Violence and Unfulfilled Promises.” Present to offer their unique perspectives on the challenges they continue to face were four Colombian union presidents as well as a Colombian Senator.

Rodolfo Vecino Acevedo, the President of the Workers Union of the Oil Industry (USO), described that “today in Colombia, anti-union violence is a reality and the government isn’t doing anything to change this reality.” Though a new Ministry of Labor was created as part of the LAP, according to Senator Alexander López Maya, “it is not working for the rights of our workers but for the rights of businesses.” Not one to mince words, he pointedly asks, “When will the LAP be enforced? Where is the Ministry of Labor?”

Alexander Carrillo Castaño, representative of the Collective of Fired Workers of the Sugar Factory San Carlos S.A., describes the human toll these issues take. “At this time our families are going through a terrible economic situation. The majority of our children have experienced hunger. The older children were removed from the university. Various workers have lost their homes. Marriages have been broken.” Alexander points to the vindictive nature of the firings, saying “It wasn’t sufficient firing us, but they also made it so that when some of us were trying to get work in another factory, they said we were dangerous and belligerent workers.” This was said about workers who had been with the factory for 20 and 30 years. Rodolfo (USO) adds “Today, in Colombia, a worker in the 21 century, just because he yells a union slogan is fired and placed on black lists.” 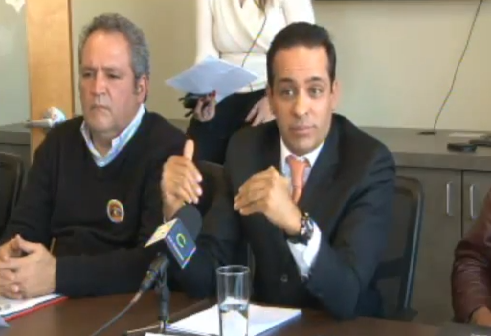 Senator Lopez Maya (on right). Photo Credit: WOLA. A common sentiment echoed by all the panelists was that not much has changed since the LAP was signed between the U.S. and Colombia. Félix Arturo Herrera Riaño, the President of the Sintraime Mining Union, noted that “the threats and murders against unionists continue. We hope that our country arrives as soon as possible to when there isn’t even one unionist leader murdered.” Jorge Iván Vélez, President of the Sintraemcali Union, noted that “they aren’t killing many now because there aren’t many left.” This is the unfortunate truth; there has only been a decrease in the statistic of anti-union violence when you compare it to the previous astronomical numbers. How many more must sacrifice their lives before change is a reality? And how long will it take for the LAP to be more than just laws on paper?

So what is it exactly these men want? Senator Lopez Maya does a good job summing it up, saying that they want respect for the lives of workers, respect for unions and the enforcement of labor laws in Colombia. He concludes, “The situation workers are facing is difficult. It’s complicated. We thought that with the LAP the situation would improve, but it hasn’t. We want to know: when will the LAP be enforced? ”