When Ana Pineda* left her small village in Nacaome, Honduras in 2009, she was full of hope: “I had dreams of going to the United States to get a good job and to help support my mother and father.” But her hopes were soon crushed when she was kidnapped by criminal gangs in Coatzalcoalcos, a coastal city in Veracruz, Mexico that is a frequent transit point for Central American migrants. “They brought me to a house in Tamaulipas, Mexico and had me there for four months, imprisoned along with other Central Americans, South Americans, and Mexicans. I was abused, terribly abused. Many of the others were raped, even the men. Thank God I was able to escape.” 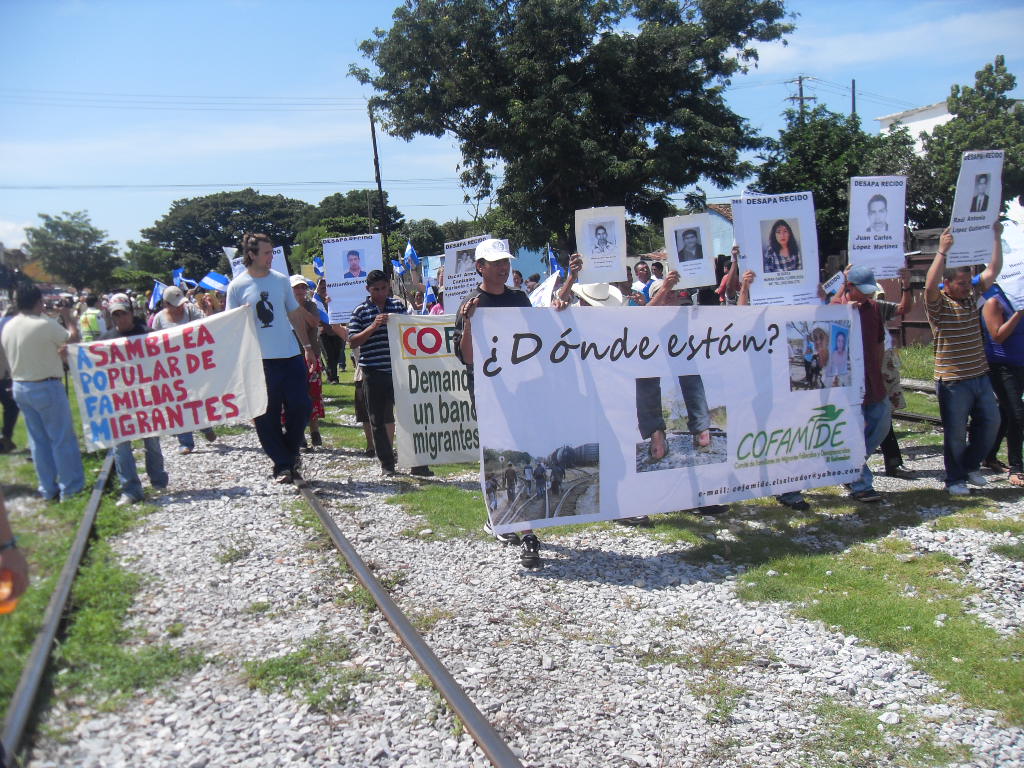 March of immigrant rights groups along the train tracks in Arriaga, ChiapaThough the experience of being kidnapped has left Ana with many scars, she didn’t let it break her spirit. Instead, she decided to fight back. This past July she joined over 500 other migrants and advocates in the “Step by Step Towards Peace” (“Paso a Paso Hacia la Paz”) Caravan, a week-long protest tour through Mexico to demand justice for migrants.

The Caravan was organized in response to the rising levels of violence carried out against migrants transiting through Mexico. Each year, an estimated 300,000 migrants, mostly from Central America, leave their hometowns and travel northward through Mexico in search of opportunities, a better life and reunification with family members in the United States. While in Mexican territory, tens of thousands of these migrants fall victim to abuse, robbery, kidnapping and rape at the hands of thieves, gangs, and even corrupt officials. The Mexican Human Rights Commission (CNDH) has estimated that over 20,000 migrants are kidnapped each year and over 75% of these crimes go unreported. According to Amnesty International, six out of every 10 women who enter Mexico as migrants fall victim to sexual abuse and assault. 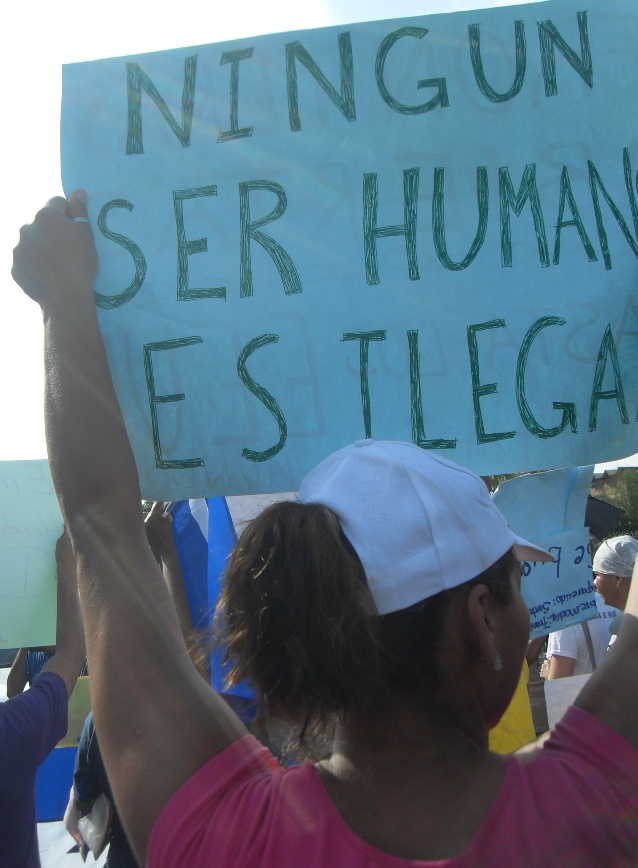 “No Human Being is Illegal”

Caravan participants publicly denounced the kidnapping, killing, and rape of migrants in Mexico and demanded that the Mexican government tak e definitive action to put an end to this violence.  While the Mexican Congress did pass a new Migration Law with the purported aim of decriminalizing migration in the country and ensuring migrant safety, civil society organizations are highly skeptical that this law will bring meaningful change as it continues to advance the characterization of migrants as possible threats to national security.

Ana is far from alone.  As the Caravan made its way from the Guatemala-Mexico border to Mexico City, traveling by bus along the route that countless migrants have followed in their northward journeys, it made stops in cities and towns that have been sites of some of the most extreme violence against migrants in recent years. At each stop, hundreds of Caravans participants held protests, press conferences, and other actions, telling their personal stories of violence endured and demanding that authorities’ take concrete action to halt the suffering and exploitation of migrants. 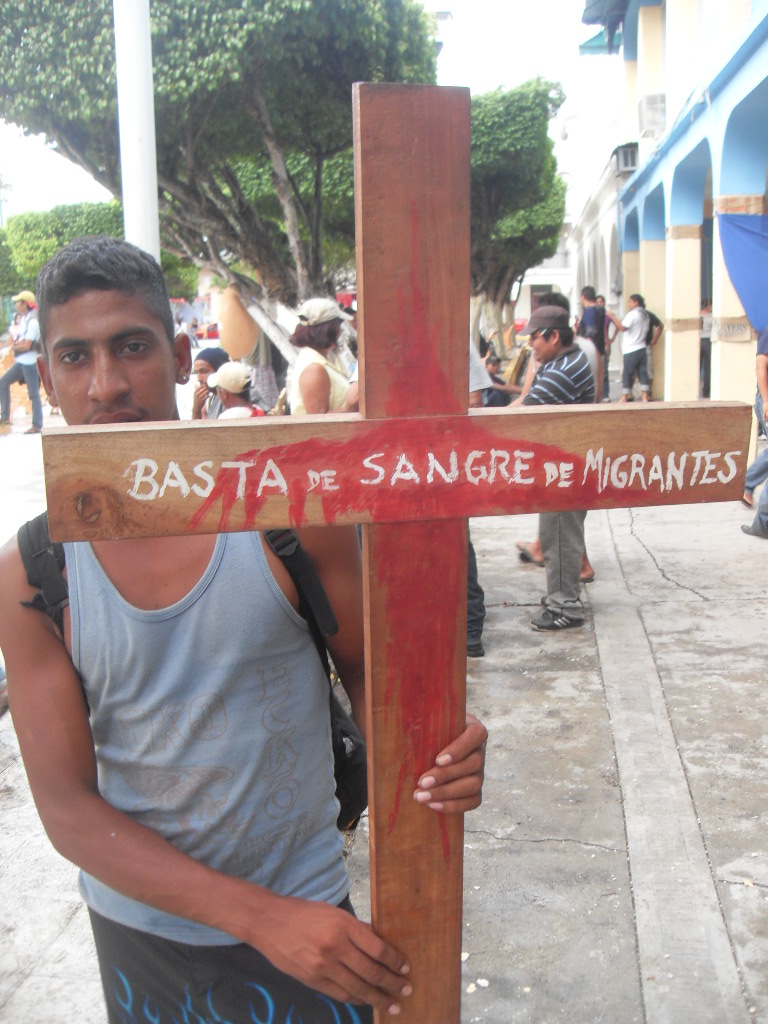 A Honduran migrant calls for an “End to Migrant Bloodshed”As Ana herself put it, after describing her kidnapping at a press conference in downtown Tapachula, Chiapas, “I’ve come here to demand justice, for all Hondurans, Salvadorans, and Guatemalans. I ask the president of Mexico, and everyone in the government: please don’t ignore us; we need your support. There needs to be an end to the violence. No more discrimination! No more abuse! And no more deaths!”

*Name has been changed.

Juliana Morris is a second-year student at Harvard Medical School. She spent this past summer as a volunteer with COFAMIPRO, a migrant rights organization based in Honduras that participated in the “Step by Step Towards Peace” Caravan. Previously, she had worked for one year (2008-2009) in the migrant shelters of Tapachula, Chiapas. Now residing in the US, she continues to fight for migrant and immigrant rights as an ally and leader of the Student Immigrant Movement of Massachusetts.

All photos courtesy of Juliana Morris