The Peace Accords Belong to Us: Winners of the Colombian Prize in Defense of Human Rights in Colombia Speak Out 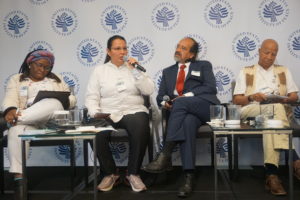 Peace and the protection of human rights in Colombia continue to elude the nation and in particular its indigenous, Afro-Colombian, and poor rural communities. This past week LAWG and WOLA along with the United States Institute of Peace celebrated the winners of the annual National Prize in Defense of Human Rights in Colombia who have committed themselves to the struggle of cultivating long-lasting peace within their communities (see their presentation here). While the event served as an opportunity to shine a light on these brave individuals and their organizations, it also served as a reminder of the work that still needs to be done.

The prize is organized by the Swedish aid agency Diakonia and Act Church of Sweden and decided by a jury made up of Colombian and international human rights experts. “It is a deep honor to serve as a juror to this prize,” said LAWG co-director Lisa Haugaard. “The hard part is choosing between so many valiant and dedicated leaders and organizations.” The annual award is presented in three different categories and the awardees for 2019 are as follows: 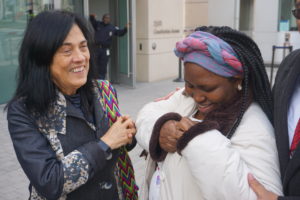 Hailing from a conflicted region in Colombia, Clemencia is the president and cofounder of the Association for Afro-descendent Women of Northern Cauca (ASOM). She has worked tirelessly in order to ensure the protection of ancestral Afro-communities against those seeking to exploit the region’s abundant natural resources. She has advocated for the development of economic projects in order to promote the financial autonomy of women. Having had personal experience with death threats and attempts on her life, Ms. Rodallega knows full well to what extent the 2016 peace accords are falling short of its aspirations. As she reminds us, “La paz no es solo la firma de un papel y ya. La paz es estar en un ambiente libre de miedo y de necesidad, poder ser mujer y comunidad.” (“Peace isn’t just signing a paper and being done with it. Peace is a climate free of fear and want, [it is] to be able to be a woman, to be part of a community.”) 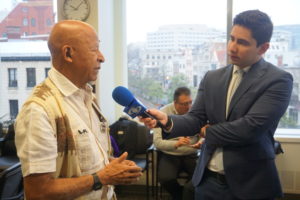 Ricardo Esquivia has dedicated 40 years of his life to the fight for justice and peace in Colombia, recognized for cultivating community through “improbable dialogues.” Mr. Esquivia is cofounder and director of the Commission for Restoration and Life and Peace of the Evangelical Council of Churches of Colombia (CEDECOL), through which he has worked towards creating reconciliation within conflict-riddled communities. Mr. Esquivia’s work epitomizes what the 2016 peace accords promised to provide: the mending of a conflict-torn nation. Ever the optimist, he likens the struggle for peace to climbing a mountain. While the feet may seem insurmountable, it’s often the minor deterrents that can lead to failure; “La dificultad no es la montaña, es la piedra que tenemos en el zapato que no nos deja avanzar. La piedra [en este caso] es la incapacidad de unirnos.” (“The difficulty isn’t the mountain, it is the stone we have in our shoe that does not let us advance. The stone in this case is our lack of ability to unite.”) His statement highlights the necessary foundation for cultivating peace: togetherness.

Collective Process of the Year: Consultancy on Human Rights and Displacement (CODHES, represented by Marco Romero) 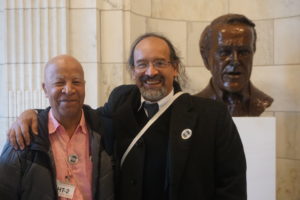 Representing the Consultancy for Human Rights and Displacement as its director, Marco Romero has worked on creating a platform for victims of displacement and human rights violations. The 2016 peace accords brought hope that victims of all of the armed actors–the FARC and ELN, the paramilitaries, the Colombian armed forces–would achieve some measure of truth, justice, reparations, and the guarantee that the brutal past would not recur. However, this remains a distant aspiration. As Professor Romero goes on to say, “Estamos muy lejos de lograr la realización de los derechos de las víctimas…” alluding to the work that is left to be done but pointing out that, “…pero el proceso ha creado las condiciones para avanzar en esa dirección.” (“We are very far from ensuring the rights of victims, but the process has created the conditions to advance in this direction.”) The award given to CODHES recognizes the organization’s significant efforts to ensure that victims had vital input into the peace negotiations in Havana and that victims’ voices are listened to in the struggle for peace accord implementation.

Collective Experience or Process of the Year: The Rural Farmer Association of the Cimitarra River Valley (ACVC, represented by Annye Páez Martínez) 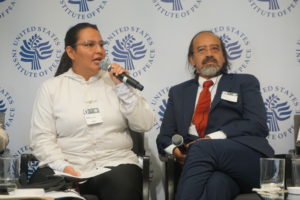 Annye Páez Martínez and Marco Romero during a panel discussion at the United States Institute of Peace. Photo: Antonio Saadipour

Annye Páez Martínez received the award for Collective Experience of the Year on behalf of the Rural Farmer Association of the Cimitarra River Valley (ACVC). Ms. Páez along with ACVC fight in the defense of the rural farmer communities of the Cimitarra River Valley, against those looking to exploit the region for its plentiful natural resources. Rural communities are often those subjected to the most severe exploitation given their lack of a voice, so the work Annye Páez contributes along with ACVC by organizing rural communities helps alter the power dynamic. Annye powerfully explained why the peace accords mean so much to her community, and why the ACVC is working so hard not to lose this once-in-a-lifetime opportunity for change: “Considerábamos el acuerdo de paz nuestro, porque formamos parte del proceso para crearlo e implementarlo.” (“We considered the peace accords our own, because we participated in the processes to create it and to implement it.”)