The Putumayo Women’s Alliance: “Here We Are Still Fighting” (Part One)

“On horseback, on motorcycles, in canoes, in jeeps, on unpaved roads, over mountains and through jungles, we arrived to listen to the voices of women.”

This account of a powerful Colombian women’s movement is brought to us by Winifred Tate, a LAWGEF Board Member and Assistant Professor of Anthropology at Colby College. Ms. Tate translated and edited the following interview with Nancy Sanchez of the Colombian human rights group Asociación MINGA about the Putumayo Women’s Alliance, a network of women’s organizations and activists working together for peace and justice in the middle of a conflict zone. This is the first of two posts about the Putumayo Women’s Alliance. 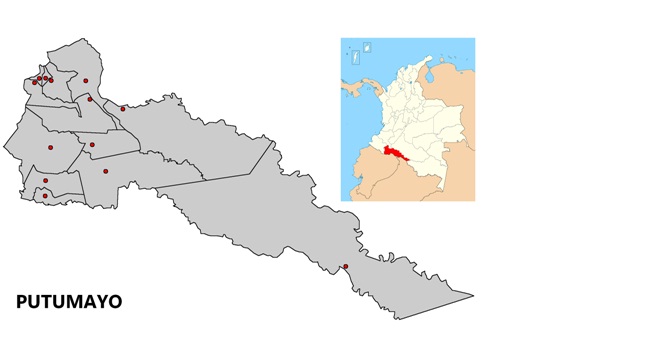 Putumayo is a state in southern Colombia with approximately 300,000 inhabitants scattered in jungle lowlands along the border with Ecuador. Between 1999 and 2003, this region was an intense conflict zone, disputed between the Revolutionary Armed Forces (FARC) guerrillas and paramilitary forces working with local military commanders.

Beginning in 2000, the United States made the region a centerpiece of Plan Colombia. The largest single program—$600 million—was military training and supplies destined for the “Push into Southern Colombia,” for new counternarcotics army battalions that would be based in Putumayo, and aerial fumigation operations. At the time, and since, U.S. and Colombian officials primarily refer to the inhabitants of Putumayo as violent criminals. But while most accounts of Putumayo stress drugs and violence, the region has also been home to several generations of efforts to organize civil society groups resisting armed actors and developing alternatives to the illicit economy. The Putumayo Women’s Alliance is one such effort.

How did the Women’s Alliance begin?

The Alliance was born in 2003. Women came together to respond to the war, and to bring the state’s attention to the humanitarian condition of the population at the time. The paramilitaries had entered the department in 1999, carrying out massacres, forced disappearances, and other abuses as they took control of many small towns. The guerrillas had declared an armed strike, preventing all traffic in and out of the region, which left the department without food and other supplies for three months.

Tired of such difficulties, they came together to protest against this situation, and to denounce the assassination of two leaders, one indigenous, a traditional authority in her community, assassinated by the guerrilla for protecting her land. The other, a community activist, was assassinated by paramilitary groups.

Who were the women? 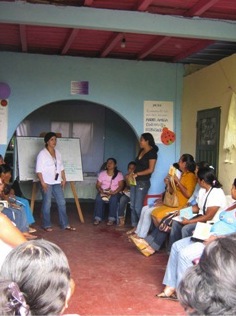 We looked around the department and we found there were more than 350 women’s organizations, micro-organizations, most of them devoted to productive projects, but women were organizing for their families and their communities.

The first five leaders of the process were teachers. These were poor women who managed to study in boarding schools run by Catholic nuns, and who learned something about rights in those schools. Later, returning to rural areas as teachers, they were sent to remote schools and there, on the ground, that they become the voice of these communities, and they work to promote organization as a response to state abandonment.

Other women leaders are born from violence carried out against men. Many peasants that denounced the paramilitaries or the guerrillas, union leaders, professors and leaders of community organizations were assassinated and disappeared. It is then that the women assume leadership roles; women are the ones that began to denounce the indiscriminate fumigation, and the resulting hunger in communities. Women are the ones taking on leadership roles in organizations that have been heavily attacked by armed groups, and are still resisting.

What were the first projects carried out by the Alliance?

We developed three themes, women and human rights, women and the economic situation, and women and social and political participation. We developed two research projects, developed through long term fieldwork, which included the urban centers and rural hamlets throughout the department.

On horseback, on motorcycles, in canoe, and in jeeps, on unpaved roads, over mountains and through jungles, we arrived in the most remote sites to listen to the voices of women. In many of these places, they told us that this was the first time that any organization had visited them and had told them about women’s rights.

Our research did not have an academic goal but rather, a political one: the transformation of women, through the knowledge of rights, the promotion of community organization and achieving real changes in women’s lives. 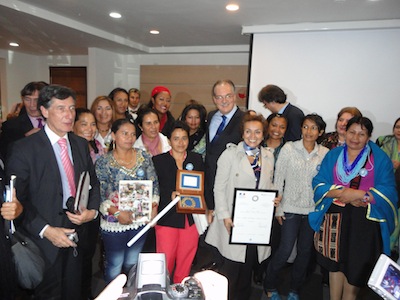 In 2011, the Putumayo Women’s Alliance won the the Antonio Nariño Colombia Human Rights Prize from the German and French governments for their work as “Tejedoras de Vida” or “Weavers of Life.” Look out for more information about this incredible movement on our blog in the next couple weeks.