“They Use the War on Drugs as an Excuse to Criminalize Poor People”: Alfredo López, Garifuna Leader from Honduras 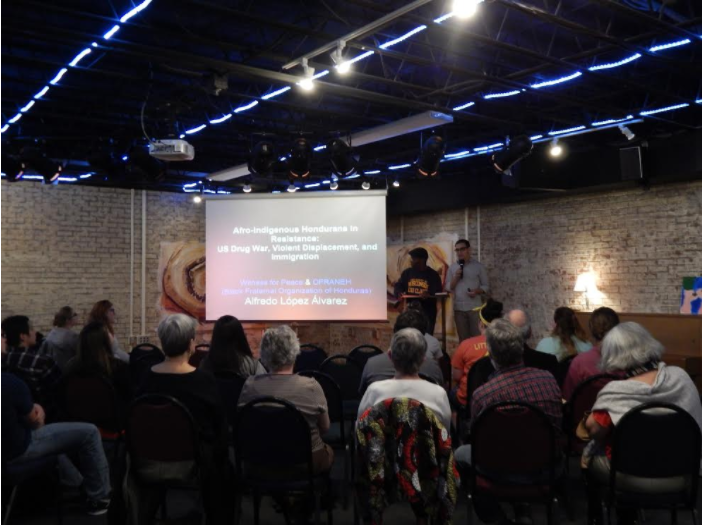 Alfredo López speaks to a crowd of over 60 people at Eastern Mennonite University.

Honduran Garifuna leader and vice president of OFRANEH Alfredo López.spoke about violence and injustice facing Garifuna communities at a conversation held at Just Associates on March 28, 2017. Mr. López was on a speaking tour with Witness for Peace across the United States, during which he spoke at various organizations and universities about the ongoing challenges of defending Garifuna and indigenous rights in Honduras. He highlighted the repercussions of the U.S. war on drugs in his country.

Mr. López felt it is essential that people in the United States become sensitized to the violence happening just a couple thousand miles to the south.

The War on Drugs

Mr. López drew attention to the connection between his work in Honduras and the work that is happening in Washington, DC. According to Mr. López, the war on drugs is often presented as a trafficking problem, but consumption in the United States is the real problem. This makes the current U.S. regional approach futile because the market demand is not being addressed. A regional, as opposed to domestic, approach, to ending drug-trafficking generally has a balloon effect—if pressured to close in one area, traffickers will simply continue to do their work in another area.

“We are the victims of the drug war and I’ve spent about six and half years in jail because of it,” Alfredo López explained. “They use the war on drugs as an excuse to criminalize poor people…They are racist against us.”

Several years ago, Mr. López said, he was incarcerated under the pretense that he was a drug trafficker. The accusation was ledged against him because of his opposition to a local tourism mega-project that would have deeply affected the Garifuna community. Similar accusations have also been raised against other Garifuna leaders, which is extremely problematic due not only to falsehood in these allegations but also to the dangerous state of Honduran prisons. “Putting someone in jail is like putting someone in a tomb,” said Mr. López.

Perhaps one of the biggest challenges for the Garifuna community resulting from the war on drugs is the continued militarization of government forces to crackdown on drug trafficking. To halt the flow of drugs, government security forces are taking more violent means to deter criminals. From both within the United States and in Central America, there is ongoing discussion about what a Plan Colombia—an aid program dedicated to increase police and military force—in Central America would look like.

Slowly but surely, more structures are being put in place to hold both the United States and Honduran governments accountable for human rights violations born out of the war on drugs, said Mr. López. Thanks to the Inter-American Commission on Human Rights and the influence of civil society, there has been increased attention to crimes committed against the Garifuna and other indigenous communities in Honduras. Just recently, OFRANEH won two rulings that set a precedent for the protection of Garifuna land by defining land boundaries. However, the challenge of upholding this precedent still remains.

The timing of Mr. López’s recent visit to the United States is no accident; at the time Witness for Peace and other nonprofit groups were leading a campaign in support of the Berta Cáceres Human Rights in Honduras Act. Berta Cáceres was a partner of OFRANEH who was killed last year for her outspoken criticism of the United States and Honduran governments’ disregard for the land rights of indigenous people. The act would suspend U.S. security aid to Honduras until human rights are protected.

According to Mr. López, the criminalization of human rights defenders is increasing as local authorities are now shifting their focus “from the big fish to the little fish.” In a desperate attempt to privatize natural resources such as land and water, local authorities are displacing indigenous communities under the guise of the war on drugs. The Latin America Working Group, Witness for Peace, Just Associates, and other similar organizations need your continued to support to ensure the protection of human rights defenders and justice in Latin America.