Through Soup and Mangos: Observations from Cuba

I have been curious about Cuba since 1999 when a friend told me to get there before the United States invaded because there would be a Gap store on every corner. Her photos showed a uniqueness, an old authenticity that I didn’t think I had experienced before. As a long- time wanderlust sufferer, if a highly-regarded worldly friend tells me a place is a “must see,” it goes on the list. I never did my homework about Cuba but rather, like many of us, allowed myself to be fed the random dogma and propaganda from the news. My curiosity lingered, and in 2007 while working for the U.S. government in the Caribbean, I learned the HIV rates in Cuba were thought to be among the lowest in the world. This was largely accomplished through quarantine. If you had HIV, you were segregated. How awful, I thought. What a terrible and demoralizing way to treat people. This rounded out my perceptions about Cuba. A place full of culture and antiquity but drowning in oppression and prejudice. I still wanted to go. In May of this year, while trolling the net for Cuba trips, I discovered Global Exchange; and as crazy luck would have it, Busboys and Poetswas taking a group to Cuba the same week I was free! [editor’s note: Busboys and Poets is a restaurant, bookstore, lounge, and theater in Washington, D.C., founded in 2005 by Andy Shallal. It has been described as a haven for writers, thinkers and performers from America’s progressive social and political movements.]

I remember arriving in Cuba and stepping outside. The blanket of warmth and smell of tropical air hit me at once. The sea of faces awaiting passengers was a mix I didn’t remember seeing before. Not largely black like in Africa, Trinidad or Barbados, not largely caramel like Barcelona or Mexico or white like America. The crowd was a beautiful potpourri of all shades and hues.  The first myth was shattered. The trip was wonderful, and as the days flew by, many myths were shattered. Although at times I felt as if I couldn’t tell what was real and what wasn’t, the perceptions of Cuba in my mind’s eye were largely reorganized as I absorbed the beauty and vibrancy of the place, whether it was strolling along the seawall, lounging on the elaborate terrace at the hotel or basking in the amazing sounds of one of the best jazz bands I’ve ever heard at a local hole-in-the-wall. Many experiences and interactions reframed my image of Cuba, but two specific encounters punctuated my experience and especially reframed my perspective–not just about Cuba but about my own shortcomings as an American accustomed to overabundance, entitlement and expectations. The encounters were soup and mangoes.

First soup. We’d spent five days learning about Cuba amidst the hustle and bustle of Havana, so retreating to the countryside was a welcome adventure. Open air, landscapes, greenery and mountains feed my soul; and this place was no different. The minute I stepped off the bus, I felt at home. We wandered around a bit and were escorted to lunch, which was bound to be an incredible experience because we were being treated to Cuba’s only organic restaurant. I couldn’t wait. We were greeted by the owner, a lovely man who after ensuring everyone was seated, proceeded to describe the menu options. The food selections sounded incredible, and I knew I would have trouble choosing. We chatted as we waited for someone to come and take our orders. And we waited. And waited more. Then it happened. The waiter approached our table with soup. He proceeded to place the soup in front of us. But we didn’t all get the same soup as you would on a pre-set menu during fine dining. I got beet soup, Esther got black bean soup, Kelly got pumpkin soup and April got vegetable soup. And so on it went until everyone had soup in front of them. It took a minute to sink in. Wait, I don’t like beet soup. I enviously glared at Esther’s black bean soup. I wanted that soup–but no one asked what I wanted. I think we all had the realization at the same moment, and we quickly began to bargain and negotiate how we would maximize the experience to ensure we at least got a bit of what we wanted. The entrée came. Same thing. Random selections. No questions asked. And so with dessert. At least I got the guava ice cream.  When I think about it, I still am a bit stunned. But there was a lesson. We are accustomed to choice….to be honest, a ridiculous overabundance of choice. As one of my fellow traveler’s said, “What do you mean we can’t choose? We are Americans. We get a choice.” Well, not so in Cuba. There’s no choice in Cuba. 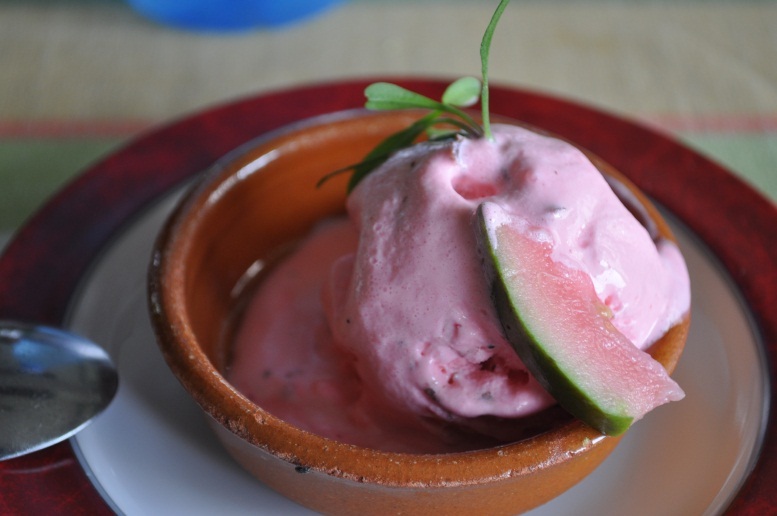 Then the mangos.  Any time I travel with a group, I eventually crave a bit of time alone. I started at the market with Kat, but she had another on her dance card so when she left I stayed behind and strolled a bit. The scenery started out familiar–the tourist haven–but as I kept wandering through a maze of narrow corridors, I lost my bearings and wandered into the part of Havana I am certain a tourist is not supposed to go. I saw another Havana. Filth, overcrowding, poverty. So this too is Cuba. We’d been sheltered. But thanks to my developing world experiences, I was comfortable. I kept strolling. And then I saw it, a wheelbarrow. There was nothing special about the wheelbarrow. I was drawn to and mesmerized by its contents. It was overflowing with mangos the size of small cantaloupes! I hadn’t had a good mango since arriving. I could look at these and tell they were the real deal. As I approached, I noticed three men guarding the wheelbarrow. They appeared inebriated and deeply engaged in drunken conversation. One of them spotted me eyeing the mangos. “Hola amiga!” one shouted. They all turned their gaze toward me and began smiling and laughing. With my embarrassingly broken Spanish I inquired about the price of a mango. “Cinco pesos,” he said. I was livid…..that’s about $5 U.S., and I yelled, “What? No way!” He held his ground, “Si, senorita. Cinco pesos.” I couldn’t believe it. Such blatant attempts to gouge the American tourist. Offended, I turned to walk away when a young woman who had been watching the interaction from afar came over and rapidly fired several sentences at them while pointing at me intermittently. She was gesturing for me to wait.  When she was done talking with them they all turned, looked at me earnestly, chuckled and said, “Oh no, senorita. Pesos, pesos,” and one of them pulled an old crumpled peso bill from his pocket to show me he meant HIS pesos, not MY pesos. Then it hit me… the dual currency. One for them and one for us. One of my pesos was 20 of their pesos. Yuck. I only had 20 of MY pesos. They gestured for me to give them the 20 pesos bill and said they would go find change.

The skeptical American in me didn’t want to part with my 20 pesos for fear they would abscond with my money. I then realized how ridiculous that sounded in my own head and relinquished the bill. The young lady took it and set off on foot while I waited for my change. As we waited, the three men and I engaged in what I am sure to an onlooker would have been a hilarious exchange of gestures and confusion, but despite my broken Spanish we were communicating. I laughed, they laughed, we bonded until she came back with my change. I gave them five of my pesos and asked for four mangos. One of them gestured for another to find me a bag. A flurry of activity ensued. I didn’t realize what the big deal was for four mangoes. They found a bag in an act of teamwork, and they proceeded to stuff the bag with mangoes. “Whoa”, I said. “I only want four.“ They stopped looked at each other in bewilderment then kept stuffing the bag with mangos. I again, said, “No, quatro mangos solamente.” The girl chimed in and began yelling at them. I pieced it together. I gave them five of my pesos, which is the same as 100 of their pesos. Since the mangos cost five of their pesos, they were trying to stuff my bag with 20 mangos! When they realized I really only wanted four mangos, the frantic conversation ensued again. This time the lady was frantic because she wanted them to give me my change! I insisted they keep it. We shook hands and laughed together. It was an “ah ha” moment. They are poor, they have so little, but they are ok. This is their Cuba, the Cuba they know and accept. I had much more money than they did, yet their concern was not my pesos but rather making sure I was ok. In a few minutes I transformed from the skeptical, cynical American jaded by my own experiences of mistrust and dishonesty at home and walked away a content traveler with four mangos and a full heart.

Cuba was a great experience. One of the reasons I love to travel is that it opens up your heart and your mind. Traveling presents new options and ways of viewing the world and humankind. It challenges our assumptions. I was glad to come back home to the land of choice and different, more subtle kinds of oppression. But Cuba has a special place, not just because of the amazingly gracious, beautiful and talented people, but because of my lessons learned from soup and mangos. I am grateful.

Dr. Lisa Fitzpatrick is a board-certified infectious diseases physician and CDC-trained medical epidemiologist who has made significant contributions in HIV/AIDS nationally and globally. She was previously an Associate Professor of Medicine at Howard University and is now the medical director of the infectious diseases Care Center at United Medical Center in Washington, DC. As  researcher, clinician, infectious disease expert, and patient advocate, Dr. Fitzpatrick has demonstrated unwavering commitment and dedication to improving public health.