Unrelenting: Constant Peril for Human Rights Defenders, Members of the LGBT Community, and Journalists in Honduras

In December 2014 the Latin America Working Group Education Fund (LAWGEF) and Center for International Policy (CIP) traveled to Honduras to investigate how the country is responding to the needs of its citizens. This is the second post in a series of seven detailing what we found. See here for the entire report. 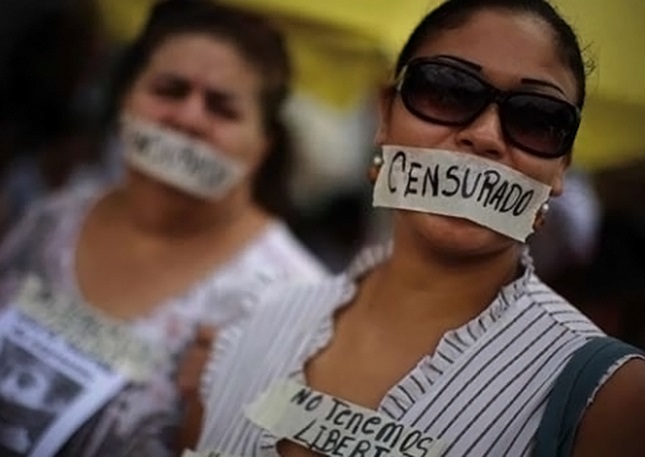 Human rights defenders, members of the LGBT community, and journalists in Honduras continue to face an astounding level of violence. Threats and attacks sharply curtail freedom of expression and association. All of these groups face the same underlying problems:

49 journalists have been killed in Honduras since 2006, 46 since the June 2009 coup, according to the press freedom group C-Libre.  In addition, journalists face threats and intimidations, including from public officials, members of the security forces, and organized crime; internal displacement due to threats; and improper use of the legal system to intimidate journalists. Journalists note that they receive pressure from government officials and editors to limit their coverage, and report that the dangers they face result in self-censorship.

Reporter Alex Sabillón endured 11 acts of intimidation and harassment from local officials, police, company officials and unknown sources between 2011 and 2014 as he sought to cover local corruption and use of natural resources, among other topics, in the city of Choloma, Cortés department.  “Every day I receive text message on my cellphone in which they say that they are going to kill me,” he told C-Libre. “All I ask is that the government guarantee for me the free exercise of my profession and my physical safety… Carrying out ethical and truthful journalism is what has put me on the wrong side of local politicians.” Journalists say that if they do report on corruption, government officials accuse them of defending the narcotraffickers.

22 human rights defenders have been killed in Honduras since 2010, according to the Committee of Relatives of the Detained and Disappeared (COFADEH). COFADEH also documentstwo disappearances, 88 thefts of information, 15 kidnappings and 3,064 improper uses of judicial system to intimidate defenders.

At least 31 trade unionists have been killed in Honduras from June 2009 until February 2014, according to the AFL-CIO Solidarity Center.  Trade union leaders suffered threats and intimidations, and threats directed against their family members.

174 LGBT Hondurans, including some leading LGBT activists, were killed from June 2009 – December 2014.  Members of the LGBT community also report arbitrary detention by police; discrimination; and attacks and harassment. Transgender women are singled out for abuse. “In Honduras, instead of fighting for marriage equality, as our LGBT counterparts here in the U.S. are doing, we are fighting for the basic right to not be murdered,” said LGBT activist Nelson Arambú.

109 environmental and land rights activists have been killed in Honduras from 2002 through 2013, with 100 killed between 2010 and 2013, according to Global Witness—more than any country in the world except Brazil.  Efforts to gain or protect land rights, as in Bajo Aguán, and opposition to mining, forestry, dams, and other large-scale projects are among the risks related to this violence.  Forced evictions by members of the police, military and private security are a widespread and serious concern.  Criminalization of social protest is an enormous obstacle to efforts by communities to protect their rights.  According to one humanitarian aid worker, “Almost all of the activists we work with in Bajo Aguán have charges against them.” An Inter-American Commission on Human Rights delegation that visited Honduras in December 2014 “received alarming information concerning killings, acts of violence, and death threats against indigenous leaders, particularly those who defend their territories and natural resources, in the contest of the development of mega-projects without prior and informed consultation.”

86 legal professionals have been killed from 2010 to December 2014, according to information  received by the Inter-American Commission on Human Rights.  While the government provides some protection, budgets are not adequate. Moreover, sometimes the kind of protection offered does not meet their needs. As one prosecutor told the commission, “Sometimes having personal protection tends to raise your profile and make you a much more sought-after target.  Plus they say, ‘Let’s get one of his children’…. It doesn’t do any good to have security for me while my family is at home, by themselves.”

Impunity and Lack of Protection

Protection measures offered by the government are completely inadequate. According to the Inter-American Commission on Human Rights, “the Commission has observed serious deficiencies in the State’s response and a low, sometimes nonexistent, level of effective implementation” of precautionary measures the Commission has issued.

The key to protection, of course, is actual progress in investigating and prosecuting threats and attacks.  And that is sorely lacking.  To give just two examples, according to the National Human Rights Commissioner of Honduras (CONADEH), 95 percent of cases of killings of legal professionals remain in impunity.  Despite efforts by the U.S. government to encourage Honduran authorities to make progress on cases of violence against members of the LGBT community, of 141 violent deaths of LGBT Hondurans from January 2010 through October 2014, according to LGBT organizations, only 30 cases have been prosecuted, of which nine have resulted in convictions and four in acquittals.

“The authorities often throw blame at the victim,” noted one journalist.  “They say, you were out walking in the street, it was your fault you were attacked. They say, he was a homosexual or drug addict or whatever, even before the body gets cold.”

What Can the Honduran Government Do to Protect Human Rights Defenders and Journalists?

The most important action the Honduran government can take is to improve investigations and prosecutions of both threats and attacks, including those cases in which participation by state agents is suspected.

Second, it is crucial to establish an effective protection program for human rights defenders and journalists. Currently, a bill (the Law to Protect Human Rights Defenders, Journalists, Social Communicators and Justice Operators) is pending in the Honduran Congress, blocked over disagreements about the source of funding to implement it. During the Inter-American Commission on Human Rights’ December visit to Honduras, President Juan Orlando Hernández committed to achieve its passage. The Commission urged the government to consult with human rights defenders, journalists and others affected to ensure that their concerns regarding the existing bill are fully incorporated.

Third, high-level government officials—from the President on down—should promote respect for human rights defenders and journalists in their public discourse and denounce threats and attacks against them. The National Human Rights Commissioner as well as other government officials with human rights responsibilities should play a proactive role in encouraging all relevant national and local authorities to take the necessary steps to protect defenders and journalists and investigate and prosecute the threats and attacks against them.