Until We Find Them, Part 1: The Disappeared in Mexico

The 1994 Inter-American Convention on Forced Disappearance of Persons defines forced disappearance as “the act of depriving a person or persons of his or their freedom, in whatever way, perpetrated by agents of the state or by persons or groups of persons acting with the authorization, support, or acquiescence of the state, followed by an absence of information or a refusal to acknowledge that deprivation of freedom or to give information on the whereabouts of that person, thereby impeding his or her recourse to the applicable legal remedies and procedural guarantees.” On Monday, March 18, 2013 the Latin America Working Group Education Fund together with the Washington Office on Latin America, the Robert F. Kennedy Center for Justice and Human Rights, the US Office on Colombia, and the Guatemala Human Rights Commissionhosted a panel event entitled “Until We Find Them: The Disappeared in Colombia, Guatemala, Mexico, and Peru” to discuss the situation of forced disappearances in each country.

Nadín Reyes Maldonado is the daughter of Edmundo Reyes Amaya, who was detained and disappeared on May 25, 2007 in Oaxaca, Mexico. She founded the Committee of Relatives of the Disappeared “Until We Find Them” (Comité de Familiares de Detenidos Desaparecidos “Hasta Encontrarlos”). Nadín shared the following testimony about the current situation of the disappeared in Mexico during the March 18th panel.The following testimony is a translation..

In our country the Mexican state fails to recognize this practice. Nevertheless, Mexico’s own Ministry of the Interior recently published statistics of 26,121 disappeared people, of which, unfortunately, the state does not differentiate between the [forcibly] disappeared and a different category such as missing or absent people. The report published by Human Rights Watch mentions the severity of this problem. They documented 250 cases of forced disappearances in 19 states of the republic. Also, as part of the campaign against forced disappearance in Mexico, we have documented during five years, from 2005 to 2010, 27 cases of forced disappearances against social activists and human rights defenders. And in only one year from January 2011 to February 2012, 30 cases, which indicates that in only one year the practice of forced disappearance against human rights defenders was greater than the five years prior. 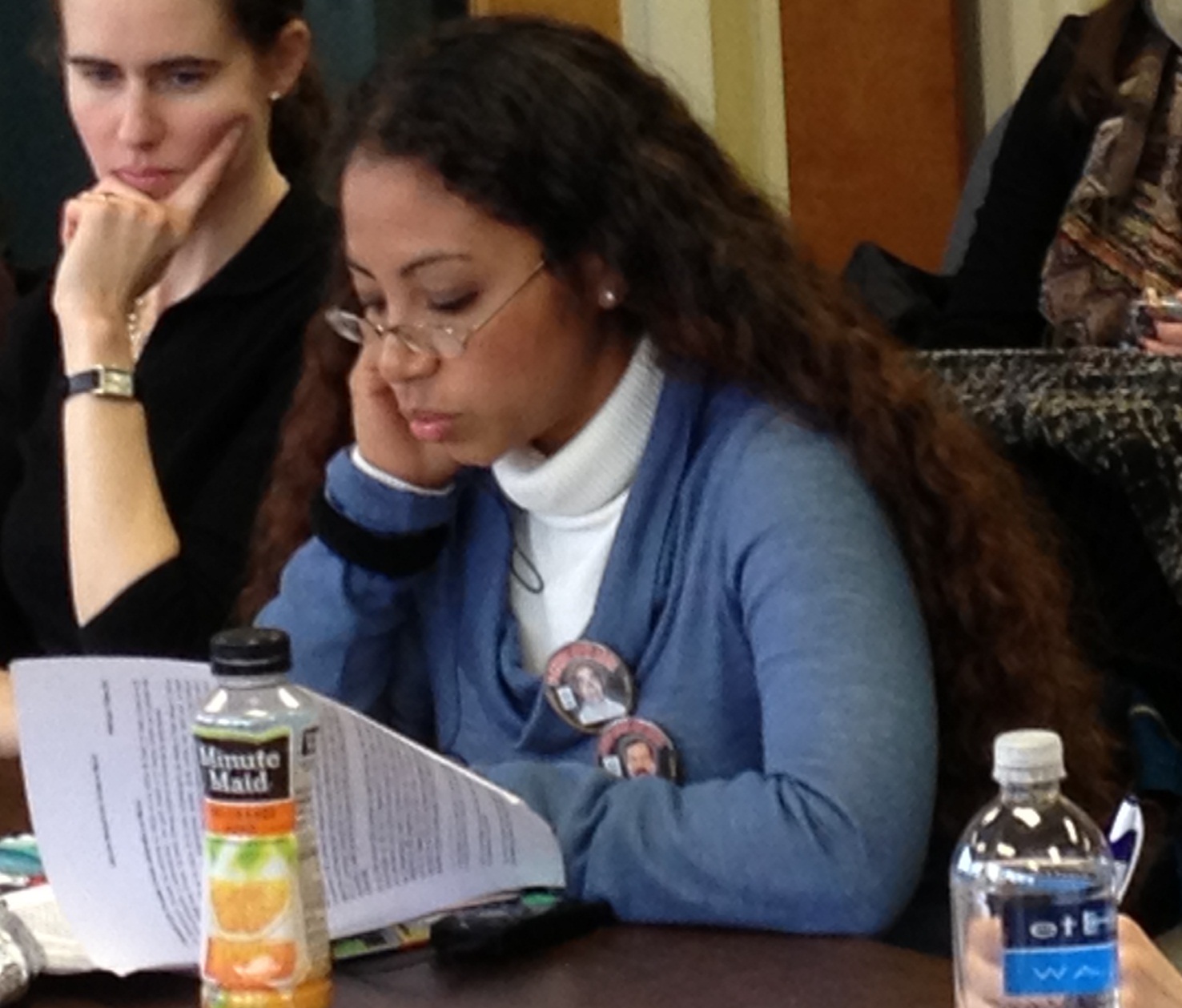 Nadine discusses forced disappearances in Mexico. PHOTO CREDIT: Emma Buckhout, LAWG.Another important point is that in Mexico there is no legal framework that guarantees the prevention and punishment of the practice of forced disappearance. The existing typification does not adequately categorize forced disappearance; it restricts the crime to public servants excluding those third parties who commit this crime with the approval of or assistance from state agents.

Regarding the profiles of victims, we have identified five categories of people who are vulnerable to the practice of forced disappearance. The first are human rights defenders. The second are political activists or people who belong to some sort of social movement. The third are migrants. Fourth are people of a young age who are workers, men who live in areas where violence has increased on the grounds of security policies organized between the state and organized crime. And fifth are women and minors.

It’s important to mention that in the north of the country there are close to a thousand documented cases of disappeared migrants in the Mexican territory, whose families face receiving the remains of their relatives without the certainty that they are them because the state of Mexico is delivering these remains without doing the corresponding analysis. The relatives do not have the certainty that these bodies are actually their loved ones.

In addition, we have also identified some traits of the perpetrators committing these crimes, who are, firstly, army, navy, or police agents. The second group are also police agents, but in black uniforms without insignia that cannot be identified. A third group are paramilitaries that are acting with the support and consent of the state. Another is groups of organized crime also acting in complicity with police groups or groups from the army. It is important to note that in the two last groups, paramilitaries and organized crime, there is evidence of the participation and collusion of the army and navy, who are committing forced disappearances under the shelter and protection of the authorities, a situation that for us makes the documentation of this practice and documenting the participation of the state more difficult.

Therefore, we hold that in Mexico this practice [of forced disappearance] is systematic. And that today, in this context of the violence of militarization and paramilitarization in this country, this practice has been allowed to continue because the state argues that these crimes are committed by organized crime groups. That is, with this reasoning the state removes itself from the responsibility of investigating and punishing the responsible parties.”

Click here to read Until We Find Them, Part 2: The Disappeared in Colombia.