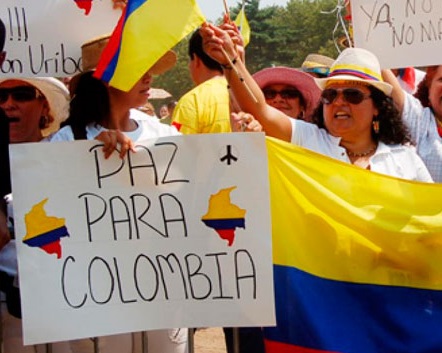 The Colombian peace process is at a critical moment. Violence escalated once again from May through early July, putting the lives of vulnerable Colombians at risk. However, the recent commitment by both sides to reduce hostilities and cooperation of the Colombian military and the FARC on a joint demining program have shown that peace is possible. The Colombian government and the FARC are accelerating the timeline for ending violence and every show of support for the ongoing peace talks urges Colombia closer to establishing a lasting peace with truth and justice.

Representative James McGovern (D-MA) has sent out a dear colleague letter addressed to Secretary of State John Kerry and Special Envoy to Colombia Bernard Aronson in support of the Colombian peace negotiations. The letter urges for the negotiations between the Colombian government and the FARC to be inclusive of those vulnerable groups of Colombian society most affected by the conflict –especially rural, indigenous and Afro-Colombian communities. The letter also urges for any peace accords reached to center on the needs of victims and contribute to ending Colombia’s history of impunity.

Can you take 5 few minutes to call or email your representatives and tell them to support peace in Colombia? Click here to use our quick and easy email form!

With the House expected to begin their August recess next week, this letter is “time urgent.” Your representatives only have until this Friday, July 31st, to sign on.
Will you help us flood your representative’s inbox with requests to sign this important letter?

If your representative has signed, thank them! Otherwise, please write or call to tell them to sign on to the Dear Colleague in support of the Colombia peace process.

To call or email your representatives more directly, look up your Representatives here. Here’s a sample email to get you started, please feel free to edit:

Here’s the full text of the dear colleague letter your representative should sign by July 31st:

We write to express our strong support for the on-going peace process in Colombia and for your efforts to provide timely support to the negotiations and the critical initial phases of implementation, should a peace accord be concluded in the coming months.  We also ask that you share this letter with the two negotiating teams in Havana so that they are also aware of our support and the issues we outline below.  We believe the commitment by the government and guerrilla negotiating teams to accelerate the timeline and conclude the negotiations in the coming months is an important and welcome decision.

We were very concerned over the escalation of hostilities that took place between late May and early July.  It is clear that both sides in the armed conflict are still capable of inflicting harm on each other.  However, it is the Colombian people – and especially rural, indigenous and Afro-Colombian communities – who suffer the most from such continued acts of violence and sabotage.  It is for these communities that we express our greatest concern and solidarity.  Colombia does not need to add more victims to the toll accrued over half a century.  We therefore welcome the recent announcement by the Government and the FARC to negotiate a bilateral ceasefire agreement on an accelerated timeline and end the violence that so afflicts communities throughout Colombia.  We also believe this will help create confidence in the ability of the negotiating parties to reach a final agreement in the coming months.  We further support the work the two parties have been carrying out together to begin demining territory contaminated by anti-personnel landmines, unexploded ordnance and improvised explosive devices.   These concrete collaborations improve the lives of civilians living in or near these areas and demonstrate the potential for peacebuilding.

We recognize that the remaining agenda items under negotiation, which deal with victims of the conflict, transitional justice and ending the conflict, are complex and difficult.  We urge you to convey to the negotiating parties our encouragement that these final agreements be inclusive, in particular to the views, needs and priorities of sectors of Colombian society that have been most affected by the conflict, yet also most excluded from decisions on how to repair the social, economic, political, community, familial, emotional and psychological damage they suffer. In particular, we emphasize the direct engagement and involvement of women, Afro-Colombians, Indigenous Peoples, campesino organizations and the internally displaced in the review of these chapters before they are finalized.  These sectors will carry the greatest burden in the effort to reinforce and restore peace, reconciliation and reconstruction. There should be a space for them at the table to determine whether the accords genuinely respond to their needs, hopes, priorities and capacities.

We also urge that the rights and needs of victims take center stage.  In matters of transitional justice, we expressly urge that there be strong and verifiable mechanisms to ensure that victims are guaranteed the right to the truth, reparations and justice, as well as the critical commitment that such acts of violence will not be repeated in the future. We also wish to express, in the strongest possible terms, our concern that the final accord not contribute to Colombia’s long and tragic history of impunity.  It is not our place, nor do we intend to impose upon the negotiators what might be the best system or combination of sanctions, punishments, deprivation of liberty or alternative sentencing.  We strongly believe, however, that they must break, not reinforce, Colombia’s culture of impunity.   Indeed, ending impunity is fundamental to ensuring the guarantee of no repetition.

Secretary Kerry and Special Envoy Aronson, we respectfully ask that you convey our support for the peace process and the matters outlined in this letter to President Juan Manuel Santos, the members of the Colombian government and FARC negotiating teams in Havana, Cuba, and to any other key officials within the Colombian government you believe might be interested.  Please know that you can count on our continued support as the peace negotiations continue and, hopefully, conclude successfully in the coming months.

Urge Your Representative to Sign the Dear Colleague Letter to Secretary Blinken on Colombian Protesters!

Urge your Representative and Senators to Stand with Peaceful Protesters in Colombia!