Have you heard? The United States and Cuba will finally open embassies in Washington and Havana and restore diplomatic relations later this month! You can watch President Obama’s statement on Cuba here.

We applaud today’s historic announcement by President Obama and we’re looking forward to the increased dialogue that will ensue between the United States and Cuba as a result of this diplomatic opening. There is still work to be done to end the trade embargo and the travel ban! We know we can count on you to continue supporting LAWG in our efforts moving forward to convince the U.S. Congress to catch up with Obama’s policy changes!

You can read our full press release below. 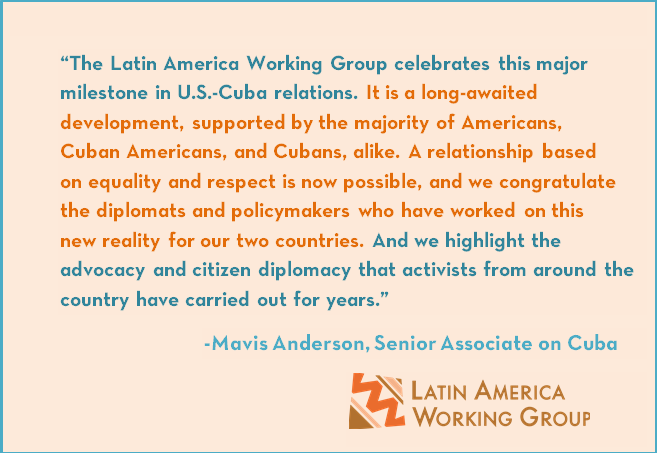 United States and Cuba to Open Embassies in Havana and Washington

Washington, D.C.— Today, President Barack Obama and Cuban President Raúl Castro announced the next historic change in diplomatic relations between the United States and Cuba. After months of negotiations, the two countries have reached an agreement to open embassies in Havana and Washington.

“The Latin America Working Group celebrates this major milestone in U.S.-Cuba relations. It is a long-awaited development, supported by the majority of Americans, Cuban Americans, and Cubans, alike. A relationship based on equality and respect is now possible, and we congratulate the diplomats and policymakers who have worked on this new reality for our two countries. And we highlight the advocacy and citizen diplomacy that activists from around the country have carried out for years. Work well done.” says Mavis Anderson, the Latin America Working Group’s Senior Associate on Cuba.

Since the late 1970s, the United States and Cuba have operated diplomatic missions in Washington and Havana referred to as “interests sections.” These missions were under the protection of Switzerland, rather than their respective countries, and did not enjoy the same status as full embassies.

The opening of embassies marks a major step forward in normalizing diplomatic relations between the United States and Cuba. The State Department now must give Congress a 15-day notice before opening an embassy. Secretary of State John Kerry will travel to Havana during the week of July 20 for a flag-raising ceremony to celebrate the reopening of the American embassy.

Cuba was officially removed from the State Sponsors of Terrorism list on May 29. President Obama’s actions on Cuba have made huge strides forward toward normalizing U.S. relations with Cuba, but much remains to be done. Only Congress can definitively end the trade embargo and the travel ban on Cuba.

For more information on LAWG’s advocacy, analysis and coalition work on Cuba, see the following: