Late this Wednesday evening, the U.S. Senate finally confirmed B. Todd Jones as Director of the Bureau of Alcohol, Tobacco, Firearms and Explosives (ATF). This marks the first time that Congress has confirmed an ATF Director since 2006 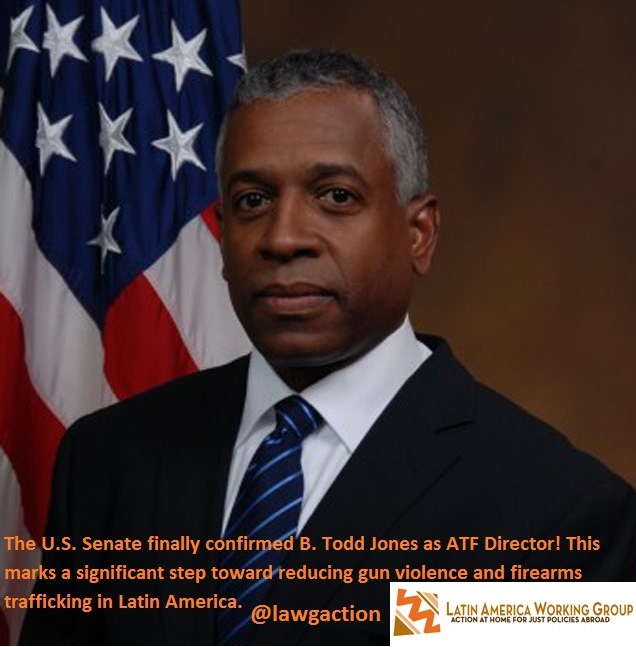 when the position became confirmable. This is a significant win for gun violence prevention advocates who have pushed to have someone at the helm of the ATF to adequately enforce U.S. gun laws.

Below is a quick recap of what various gun violence prevention advocates are saying about this huge win!

•    A statement released by Captain Mark Kelly, co-founder of Americans for Responsible Solutions, highlights that, “Americans know that a law enforcement agency tasked with keeping us safe from gun crime needs to have a permanent leader. Now the ATF has a great one in B. Todd Jones, thanks to the Senators who voted to confirm him. Our hope is that the Senate will build on this victory by turning its attention to other sensible solutions like expanded background checks.”

•    In a statement released by the Brady Campaign to Prevent Gun Violence, Dan Gross, President of the Brady Campaign, said, “For the past six years, the gun lobby leadership has fought vigorously against giving the agency the leadership and resources they need to enforce our gun laws. Make no mistake; this is a sound defeat in their continued campaign to not only block new common sense gun laws, but also to hamstring the ATF from enforcing the laws on the books.”

•    “Tonight’s votes in the U.S. Senate (60-40) to invoke cloture and 53-42 to confirm) were good news for the agency, which will now have the permanent leadership it desperately needs,” states a press release from the Coalition to Stop Gun Violence.

•    The Co-Chairs of Mayors Against Illegal Guns, New York City Mayor Michael R. Bloomberg and Boston Mayor Thomas M. Menino, issued a statement applauding the Senate’s vote. “B. Todd Jones’ extensive experience in law enforcement will serve the agency – and the American people – well, as we continue our push for common-sense solutions that will reduce gun violence and keep Americans safe.”

•    “Even without further action from Congress, ATF already has the power to take important steps forward to prevent gun violence. With this vote, ATF will now have the leadership it needs to effectively enforce the ban on imported assault rifles that was first implemented by the George H.W. Bush Administration,” said the Violence Policy Center’s Legislative Director Kristen Rand in a press release about the confirmation about B. Todd Jones.  The press release also notes that “assault weapons that are imported into the United States play a substantial role in the arsenals of Mexico-based drug trafficking organizations.”

•    Clay Boggs, Program Officer at the Washington Office on Latin America (WOLA), noted in his commentary that “As full-time director of the ATF, Jones will face many challenges. One of the many areas Jones should focus on is cross-border gun trafficking. Even as media coverage of Mexico focuses more on economic issues and less on violence, rates of homicide, kidnapping, and extortion remain extremely high. And too many guns from the United States are ending up in the hands of criminals; 70 percent of guns recovered in Mexico and submitted for tracing came from the United States. With his confirmation, Jones now can and should work to reduce this number.”